LOVE AND ANARCHY is the new Swedish series on Netflix but who is in the cast of Love and Anarchy?

Love and Anarchy premiered on Netflix today (Wednesday, November 4) and fans are curious to know more about the stars of the show. Express.co.uk has everything you need to know about the cast of the romantic comedy series.

Ida Engvoll portrays Sofie in Love and Anarchy on Netflix.

The series follows Sofie, a young married mother of two who’s flirtations with a young IT consultant take an interesting and unexpected turn.

Speaking to Senal News, Engvoll said: “I hope Love & Anarchy becomes cheeky, funny and will give a new perspective on our society.

"To me, the story is a paradox taking place within and around my character Sofie in a society that isn’t fully embracing the human being.” 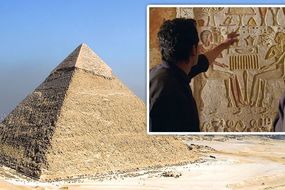 Engvoll is a Swedish actor best known for her role as Sonja in the Oscar-nominated film A Man Called Ove.

Her other credits include The Inspector and the Sea, Bonusfamiljen and Andra Åket.

Engvoll also starred in the third series of The Bridge as Tina Matsson.