CHINA remains one of the few countries that have not yet congratulated President-elect Joe Biden on his apparent electoral win against Donald Trump.

Despite most national leaders publicly acknowledging Mr Biden’s win, China’s president, Xi Jinping, has stayed silent. Contrarily, Mr Trump was congratulated by Mr Xi on his election back in 2016, with China’s president calling for a “stable” relationship between the two nations.

Mr Xi said: "China pays high attention to the Sino-US relationship and hopes to develop a sound, long-term and stable relationship with the US.”

He added he hoped to "settle all disputes with the US in accordance with the principle of non-confrontation".

She said: “Even though Biden will be tough on China, and will work with partners and allies to have a concerted China policy, his platform says we will work with China on areas where there's mutual interest, whether that's climate change or North Korea. And then they'll push back in other areas.

“So it'll be more nuanced, but I think it'll be better for China because it won't be so erratic and ad hoc like Trump was.”

In the UK, Prime Minister Boris Johnson congratulated Mr Biden on his victory during a phone conversation.

Mr Johnson tweeted: “I just spoke Joe Biden to congratulate him on his election.

“I look forward to strengthening the partnership between our countries and to working with him on our shared priorities – from tackling climate change, to promoting democracy and building back better from the pandemic.” 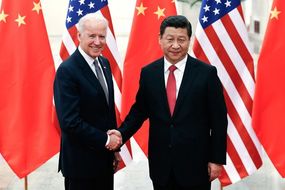