ALEX JONES - a presenter on The One Show - has shared details about an argument she had at home with her husband Charlie, in the run-up to Christmas Day.

The One Show presenter Alex Jones, 43, revealed she clashed with her husband Charlie Thomson about when to put their Christmas tree up after a disaster last year. Speaking to her co-star Amol Rajan, 37, she revealed why it was going up later this time around.

The whole thing toppled over

The pair began by showing viewers their newly-decorated studio in the run-up to the big day.

Amol then turned to Alex and asked her about a “home palaver” she had told him about.

Explaining to viewers, she said: “We had a discussion, slash, argument about the tree earlier on, because it’s a real tree and last year, we went through two.

“On the 16th, the whole thing toppled over… dead!”

Alex Jones: The One Show host said she clashed with her husband about their Christmas tree (Image: BBC•INSTAGRAM•ALEXJONES)

Alex Jones: The One Show host opened up about her dilemma to co-star Amol (Image: BBC) 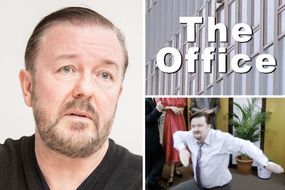 Surprised by her admission, Amol interjected: “On the 16th? That’s not much of a tree.”

Agreeing, she added: “So this year, I thought, no we’ve got to wait until the weekend.”

Alex’s co-host then suggested she should use a fake tree to avoid another mishap. 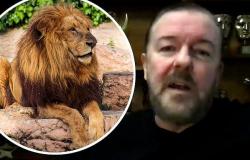 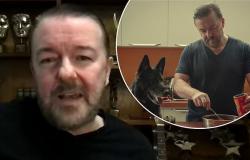 Ricky Gervais admits he wants to be fed to LIONS when he dies 'to give ...

Harry Brant's family says he 'was just days away from re-entering rehab' prior ...