She's a proud mother to four children, whom she shares with husband David Beckham.

And Victoria Beckham revealed the uncanny resemblance she shares with second son Romeo, 17, as she uploaded a throwback snap of herself to Instagram on Saturday.

The fashion designer, 45, looked adorable in the retro snap, in which she sported cute pigtails and a blue and white tracksuit. 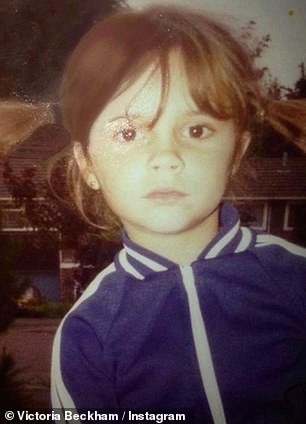 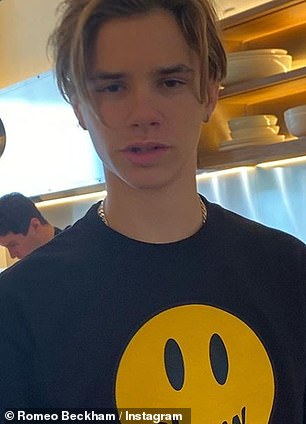 Lookalike: Victoria Beckham, 45, revealed the uncanny resemblance she shares with second son Romeo, 17, as she uploaded a throwback snap of herself to Instagram on Saturday

Captioning the image, the star joked that she's always been sporty and urged her followers to guess which of her children she looks the most like.

She wrote: 'I was sporty from an early age. Which little Beckham looks like me? x VB.'

However, it was clear to see she's the spitting image teen, with several of her fans saying so in the comments.

The former Spice Girl also shares sons Brooklyn, 20, and Cruz, 14, and eight-year-old daughter Harper with the her football ace husband, 44.

Uncanny: She wrote: 'I was sporty from an early age. Which little Beckham looks like me? x VB'

Meanwhile, though his mum is a renowned fashion designer, having her designs worn by stars including Eva Longoria and Kate Middleton, Romeo recently took fashion inspiration from someone unexpected during a date night with his girlfriend.

The teen was inspired by England football manager Gareth Southgate, 49, as he rocked a smart navy waistcoat during a date with Mia Regan on Friday.

The pair looked in good spirits in the image, with Mia (known as Mimi Moocher) sticking her tongue out, while Romeo pulled a funny face.