Sarah Michelle Gellar thanks a friend for being the inadvertent reason she's spent 20 years with her beloved husband Freddie Prinze Jr.

Sarah Michelle Gellar and Freddie Prinze Jr.'s relationship is all thanks to a friend who missed her flight.

The actress took to social media on Friday to give thanks to a good friend who inadvertently allowed her to grow closer to her now-husband back in the day.

Alongside a side-by-side image showing the loving couple 20 years ago and today, she included this sweet caption: '20 years ago this week, my friend @realfreddieprinze and I were supposed to have dinner with a mutual friend from out of town. That friend missed her flight, but we decided to still meet and catch up. Now 20 years together, 17 plus married and two kids, we still go to that restaurant for dinner. 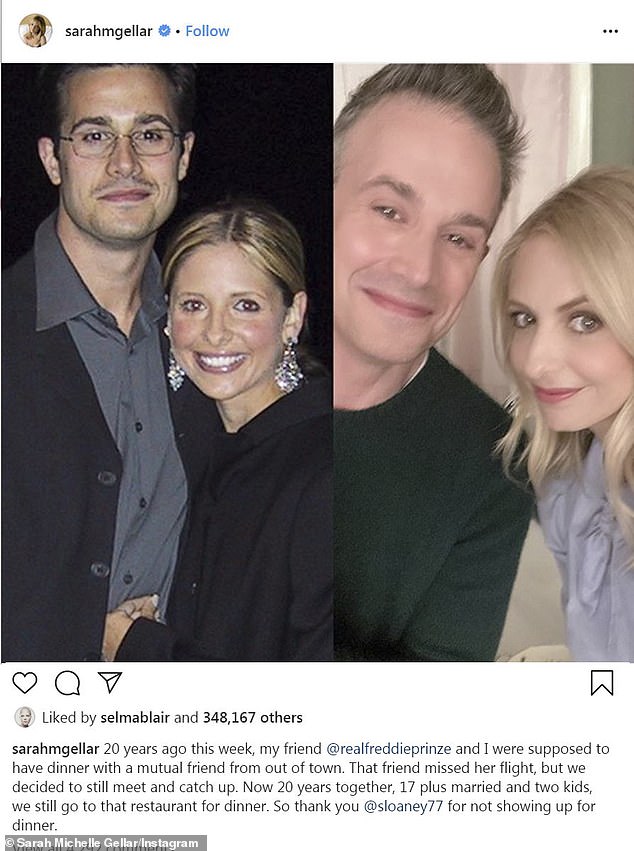 Built to last: Sarah Michelle Gellar took to social media on Friday to give thanks to a friend who inadvertently allowed her to grow closer to now-husband Freddie Prinze, Jr. back in the day

'So thank you @sloaney77 for not showing up for dinner,' the Cruel Intentions actress, 42, concluded.

Gellar and Prinze, 43, first worked together on the 1997 slasher film I Know What You Did Last Summer, which was one of several teen horror films made in the wake of Scream's runaway success the year before.

While Sarah also had a brief uncredited scene in Freddie's 1999 rom-com She's All That, the pair would go on to headline another big movie together in 2002. Scooby Doo also costarred Scream's Matthew Lillard and Linda Cardellini who can now be seen on Dead To Me.

2002 was also the year Gellar and Prinze got married. They went on to have two

PREV Justin Bieber buys $1200 Kobe Bryant art as he continues to mourn the loss of ...
NEXT Love Island CONFIRMS the return of Casa Amor