She recently recounted 'dying for 40 seconds' while giving birth to daughter Hollie back in 2012 while saying she owes her life to the NHS.

And Amanda Holden has continued her efforts to raise money for frontline staff by promoting her new single on Instagram on Saturday.

The Britain's Got Talent judge, 49, looked radiant as she put on a very leggy display in an electric blue raincoat and black wellington boots. 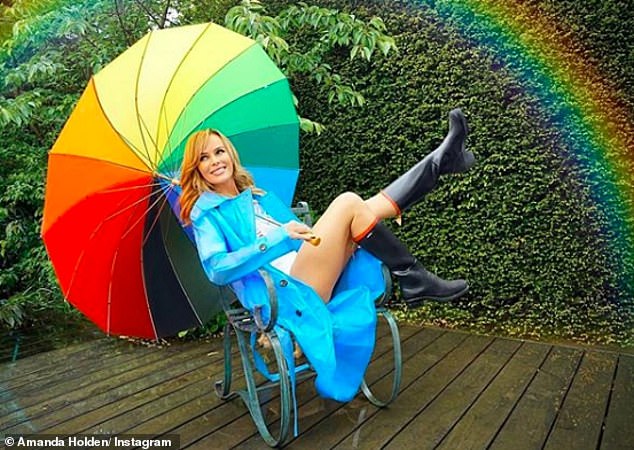 She styled her honey tresses in loose curls and posed playfully on her patio under a giant rainbow umbrella as she gazed off into the distance.

Amanda uploaded the colourful snap alongside a caption that read: 'Over the rainbow raising funds for @nhscharitiestogether link in my bio to download it [rainbow emoji].'

She has released a cover of Somewhere Over The Rainbow, in conjunction with the M&S campaign All In This Together, to help the NHS amid the current COVID-19 crisis as it is a cause close to her heart.

Earlier this week Amanda recalled 'dying for 40 seconds' during childbirth while declaring she owes her life to the NHS.

The TV personality made the emotional revelation as she gave the first ever radio play of her newly-released charity single on Heart Radio.

She told her Breakfast Show co-host Jamie Theakston, 49, about her near-death experience during labour with daughter Hollie, now eight, while praising the NHS for 'getting her through' stillbirth of son Theo in 2011. 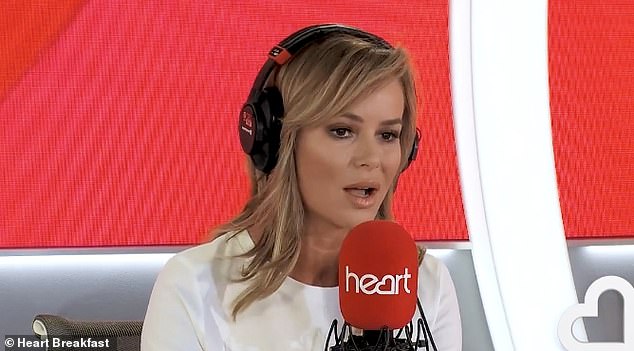 Grateful: Earlier in the day, Amanda recalled 'dying for 40 seconds' during childbirth, while declaring she owes her life to the NHS

Amanda and record producer husband Chris Hughes have been married since 2008 and are parents to daughters Alexa, 14, and Hollie.

PREV Amanda Holden joins lookalike daughters in the weekly Clap For Our Carers ...
NEXT Sylvester Stallone slashes nearly $850k off his desert retreat as he re-lists ...