Lorraine Kelly looked on cloud nine as she shared a rare glimpse of her husband Steve Smith as they celebrated their 28th anniversary together.

The couple, who tied the knot in 1992, were treated to afternoon tea at The Ivy restaurant by their daughter Rosie, with Lorraine, 60, sharing a snap on Instagram.

The pair were all smiles as they both held up desserts with 'Happy Anniversary' written alongside it as their nearest and dearest sent their well wishes. 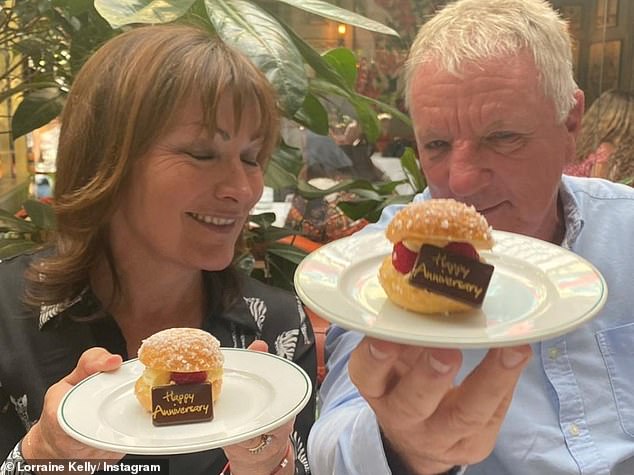 Celebrations: Lorraine Kelly, 60, looked on cloud nine as she shared a rare glimpse of her husband Steve Smith as they celebrated their 28th anniversary together

Lorraine wrote: 'A lovely lunch as a present from @rosiekellysmith at #theivymarlowgarden to celebrate our anniversary. Just perfect xxxx'.

The chat show also shared a photo of the couple taken on their wedding day as they left the church after saying 'I do'.

Lorraine wrote: 'So this happened 28 years ago! Happy anniversary to my husband Steve who makes me laugh and is always in my corner. #anniversary #love #happy'.

The ITV star occasionally shares snaps of herself alongside Steve, who is a TV cameraman, to her Instagram but their relationship has mostly been out

PREV Gregg Wallace, 55, lost weight to be 'physically attractive' for his younger ...
NEXT Alesha Dixon believes having BGT forced off the air could 'work in the favour' ...