A day at the beach became a family affair as Alec and Hilaria Baldwin made their first public appearance with newborn son Eduardo on Sunday.

Hilaria, 36, cradled the child - her fifth with Hollywood star Alec - as the couple ventured out for a coastal stroll in exclusive New York enclave The Hamptons.

The proud parents were accompanied by daughter Carmen, 13, and their three elder sons, Rafael, five, Leonardo, four, and two-year old Romeo while taking in their picturesque surroundings. 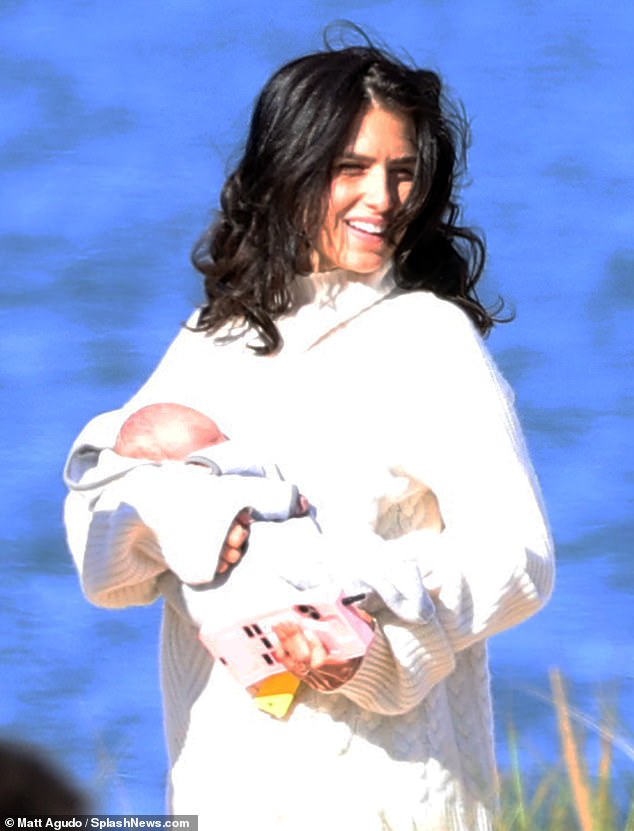 Proud mother: Hilaria Baldwin cradled newborn son Eduardo - her fifth child with Hollywood star Alec Baldwin - as the couple ventured out for a coastal stroll in The Hamptons on Sunday

Alec and Hilaria welcomed Eduardo on September 7th after previously suffering two miscarriages while trying for a fifth child.

Taking to Instagram shortly after the birth, Hilaria was seen holding the baby as she sat in her hospital bed with her 62-year-old husband by her side.

Captioning the snap, she wrote: 'We had a baby last night. He is perfect and we couldn’t be happier. Stay tuned