Sarah Harris and Angela Bishop recounted their heartbreaking experiences with miscarriages in a very emotional episode of Studio 10 on Monday.

Speaking publicly for the first time about their tragic miscarriages, both women confessed they weren't even aware of what the other had been through until recently, confessing there was a stigma about talking about it.

Sarah, 39, who was verging on tears during the segment, revealed she'd suffered a miscarriage eight weeks into her first pregnancy, and admitted just reliving it was causing her to get 'all shaky'. 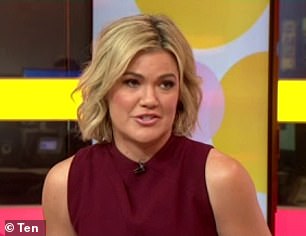 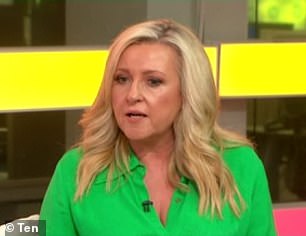 Speaking out: Sarah Harris (left) and Angela Bishop (right) recounted their heartbreaking experiences with miscarriages on Studio 10 on Monday

'It was the day before the Logies... and I was trying on Spanx, as you do, and I was in the change room, and there was just blood everywhere,' she said.

'I called my mother-in-law and said, "I don't know what's happening," and she said, "You're probably having a miscarriage."'

Sarah said she called her GP, who confirmed she was indeed having a miscarriage, and advised her to go for a scan on the Monday. 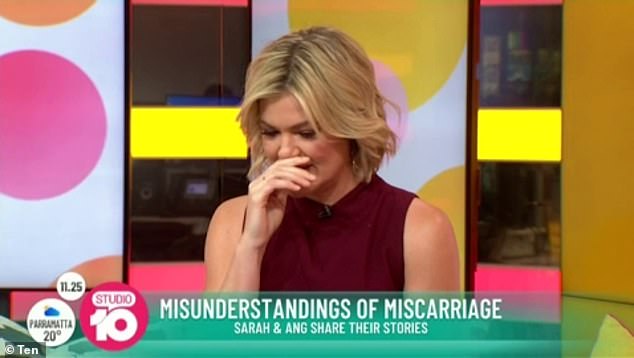 Getting emotional: Verging on tears, Sarah, 39, revealed she'd suffered a miscarriage eight weeks into her first pregnancy, and admitted just reliving it was causing her to get 'all shaky'

'For 36 hours, I just bled and thought, "Oh, well. That's my first baby gone," and I kind of just dealt with it in my own way,' she revealed.

But after going for the scan, the sonographer discovered another heartbeat, and told Sarah she'd miscarried a twin, before she safely delivered