Where is the bump?! Bindi Irwin fans go wild as pregnant star steps out for a stroll with a wombat at Australia Zoo and covers her blossoming figure in her signature khakis

She announced she was expecting her first child with husband Chandler Powell in August.

And now Bindi Irwin's fans are eagerly waiting to see the first signs of a baby bump.

The wildlife warrior's followers were whipped into a frenzy on Thursday when the 22-year-old daughter of the late Steve Irwin shared some pictures of herself going for a walk with a wombat at Australia Zoo. 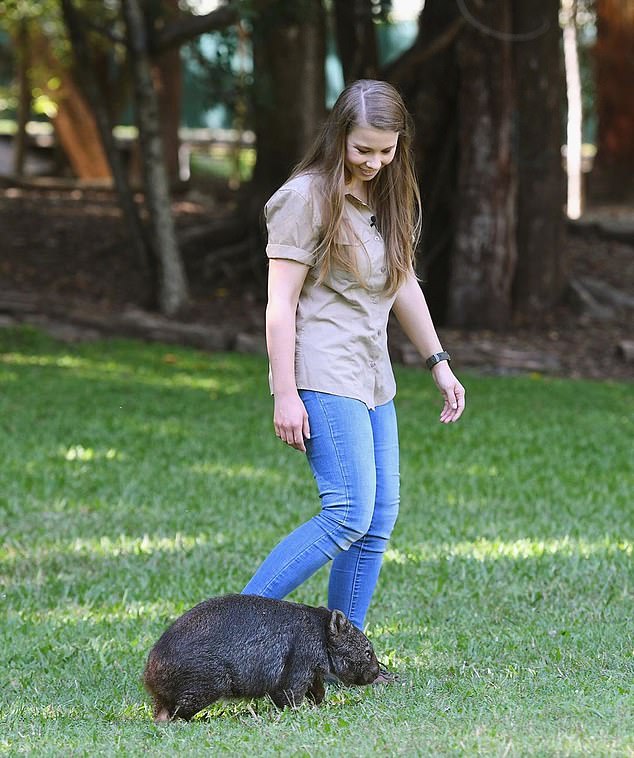 Cute: Bindi Irwin covered up her baby bump in her signature khakis as she went for a stroll with a wombat at Australia Zoo this week

The question on everyone's lips was why Bindi doesn't appear to be showing yet.

One of Bindi's work colleagues explained that the newlywed was in her first trimester and it was only early days.

'She told me that she is not showing just yet as she’s only in tri 1 and because she’s having a baby girl it will take longer to show! But I am so excited for when she does show!!' she wrote in the comments section.

In the pictures, Bindi was joined by her mother Terri and they both wore their work uniforms.

PREV Kylie Minogue reveals she has been sneaking into gay bars for THIRTY years to ...
NEXT Steve McQueen says he battled 'institutional racism' at school

Jennifer Lopez carries a Coach bag with 'Vote' embroidered for date night with ...