Last month, he was the target of much mockery, after he posted a shot of a mystery brunette cooking - only for it to be revealed that they didn't even know each other.

But it appears that love truly is in the air for boxer Ricky Hatton, 39, as for the past several weeks he's been sharing snaps of himself with new girlfriend Marie Pollard, 36 - a year after calling off his engagement to Jennifer Dooley.

A source told The Sun: 'He’s known Marie for years, but now they’ve grown close. Since splitting from Jennifer, Ricky has had a tough time with love. He’s made his name for himself being a fighter but in reality he’s just a big softie.

'He’s been friends with Marie for years, but it’s only recently that they’ve grown close. Marie keeps herself in great shape and caught the eye of Ricky. And just like his career, he’s definitely punching above his weight.'

Over the festive season, the sportsman showed that the pair spent their time together in Manchester, as he took to Instagram to share images of them enjoying a Christmas meral with Ricky's family.

The pair have also been seen enjoying variety of dates together, with Ricky once affectionately refering to the blonde Beauty as his 'bezzie'.

In June, they Ricky revealed on Twitter that he accidentally took her to a church when he'd intended on taking her on a date to a pub called The Church Inn.

They've since watched Manchester City's football matches together, celebrated a birthday in Dublin, dined with pals and even partied with Chris Eubank.

As a boxing legend, he's used to starting the day with a protein-fuelled breakfast.

But in an Instagram post shared online on Wednesday morning, it wasn't the fried egg Ricky Hatton was about to eat that caught the attention of his social media followers.

The 39-year-old shared a snap of a woman wearing lingerie, knee-high boots and nothing else, frying an egg sunny-side-up, but in a rather embarrassing turn of events it seems the sports star has NO connection to the Beauty and had stolen the snap from the internet. 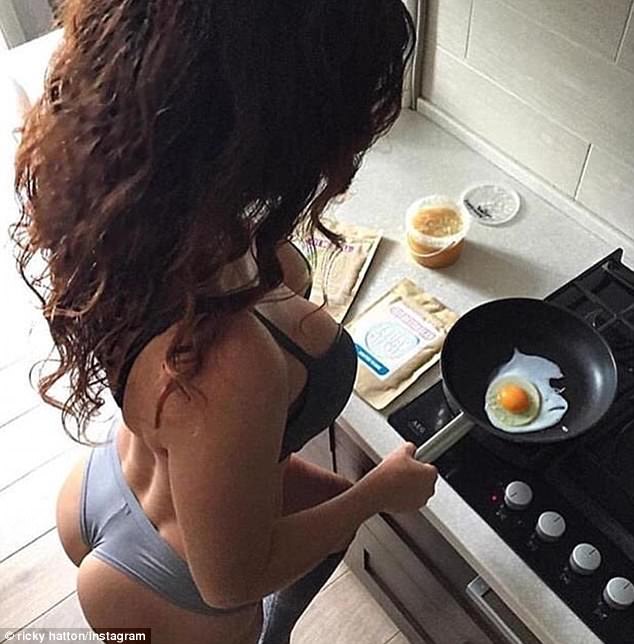 One s(hell) of a woman! Boxer Ricky Hatton shares a saucy photo of his morning eggs... being cooked by a VERY busty lingere-clad mystery girl

Ricky led his followers to believe that the girl in question was cooking him up a treat in the kitchen, as he accompanied the sultry snap with the caption: 'Some breakfast I woke up to this morning.'

PREV I'm A Celebrity 2020: Shane Richie and Beverley Callard mimic their soap ...
NEXT Katy Perry offers a sneak peek of her Christmas tree costume on ABC's  The ...