Diagnosed with Crohn’s disease at 13, by the time she reached 25, schoolteacher Kelly Owens had given up all hope of living a normal life. The debilitating inflammatory bowel disease affects about 300,000 people in the UK, causing diarrhoea, extreme tiredness, stomach aches and weight loss.

There is no cure, but drugs such as steroids can reduce inflammation, and the condition may be partially relieved by surgery to repair or remove damaged parts of the digestive system.

Over the years, doctors had tried almost two dozen different drugs on Kelly, who says they ‘either didn’t work at all or my body would build up antibodies against them and they’d soon stop working’. 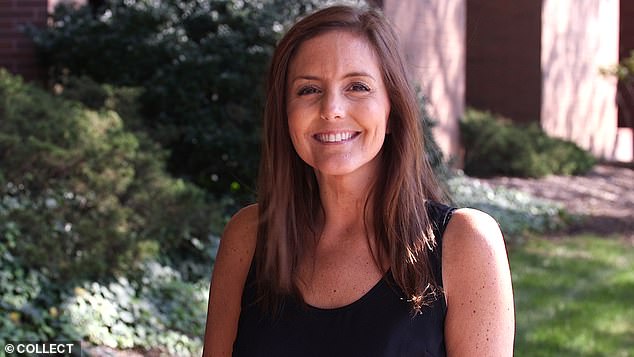 Kelly Owens, 30, volunteered in 2017 to be a guinea pig in a trial of a revolutionary technique that could offer a new treatment for dozens of diseases, including arthritis, asthma, diabetes and depression

Kelly wasn’t just battling the colitis — the inflammation and ulceration of the large intestine — that is the classic manifestation of Crohn’s. The condition had also triggered inflammatory arthritis that affected all her joints, even her jaw, as well as pyoderma gangrenosum, a skin condition that left her legs covered in agonising ulcers.

Just one steroid, prednisone, gave her any relief. ‘It was the only thing that helped me to function,’ says Kelly, now 30.

But prednisone reduces the amount of calcium in the blood and soon she was diagnosed with osteoporosis, a condition that weakens bones to the point where they can easily break.

'Miracle' may treat dozens of diseases

Kelly says that by the time she was 25, she was ‘in pretty bad shape’. But within three years her condition had improved beyond all recognition, thanks to what she describes as ‘a miracle’ — a miracle that countless other patients could one day be experiencing.

In 2017, Kelly volunteered to be a guinea pig in a trial of a revolutionary technique that could offer a new treatment for dozens of diseases, including arthritis, asthma, diabetes and depression. That decision has transformed her life. 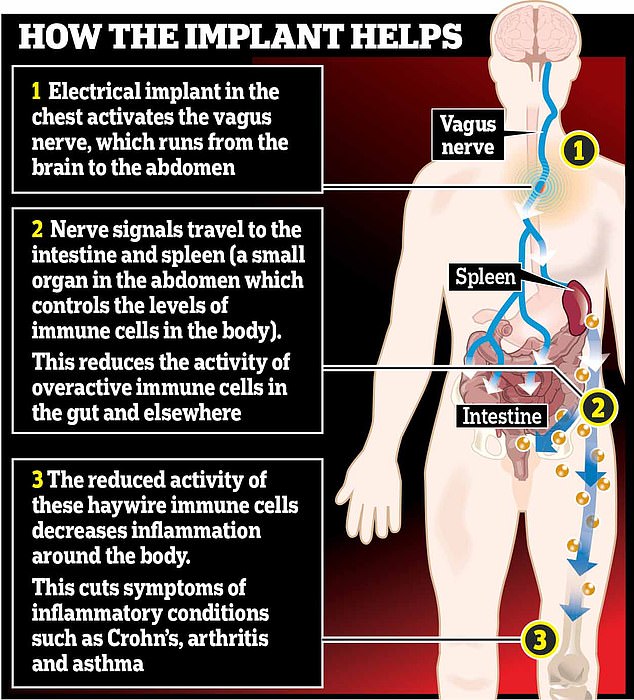 It works by an electrical implant in the chest which activates the vagus nerve, which runs from the brain to the abdomen

Kelly is one of a handful of people worldwide to benefit from this revolutionary branch of medicine: bioelectronics. She now has a device the size of a matchbox implanted in her chest that sends messages to keep her immune system under control.

For her, it has been life-changing.

‘Before, I had to think about every movement I made,’ she says. ‘Now I just have this wonderfully normal life and I’m medication-free. I never imagined that 30 years old could feel so young.’

Our immune systems keep us healthy by fighting off infection or the effects of injury. But sometimes they go haywire, producing an overreaction that causes diseases including Crohn’s, diabetes, rheumatoid arthritis, Alzheimer’s and multiple sclerosis. 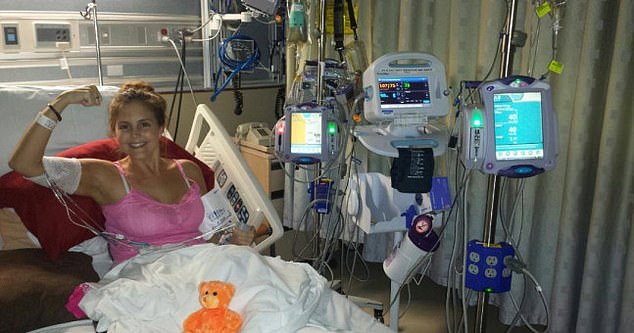 Diagnosed with Crohn’s disease at 13, by the time Kelly reached 25, she had given up all hope of living a normal life

Traditionally, drugs have been used to dampen down this response, but companies are now racing to develop what many believe will be a cheaper and more effective alternative, without any of the drugs’ side-effects.

Their hopes rest on tiny electronic devices implanted in the body to regulate the electrical impulses that control the inflammatory reflex of the immune system.

The father of bioelectronics is Professor Kevin Tracey, a neurosurgeon and inventor, now president and CEO of the Feinstein Institute for Medical Research in New York.

In 2000, Dr Tracey published a paper in the journal Nature showing that inflammation in rats could be reduced by electronically stimulating the vagus nerve.

This is the longest nerve in the body, running from the base of the brain, then dividing into two before travelling through the neck, chest and abdomen. It works as a conduit for a host of vital functions, including controlling heart rate and body temperature.

Dr Tracey discovered that this nerve also carries information that regulates the immune system and inflammation — and that this ‘inflammatory reflex’ could be controlled by electrical stimulation. As he told Good Health: ‘We now know that specific nerves control specific molecular targets in the same way that drugs do.’

Drugs attach themselves to these targets (via ‘receptor’ proteins in or on cells) in order to block messages from the body that would otherwise trigger the cell to react in an undesirable way.

Ibuprofen, for example, works by interfering with the chemical messages that trigger inflammation and pain — but most drugs can’t be finely targeted and may have side effects.

‘Side effects and the expense are real barriers,’ says Dr Tracey. ‘And people forget to take them.’

Kelly had seen Dr Tracey being interviewed in 2014 about a new device he had invented to treat inflammatory diseases.

She recalls: ‘He was talking about it in the context of rheumatoid arthritis but I wondered if this could work for me.’ Kelly contacted Dr Tracey, who advised her that although his device was not then suitable, she should keep checking back as his team’s work progressed.

Finally, some hope for Crohn's

In 2012, Kelly married Sean, her childhood sweetheart, and moved from New Jersey to Hawaii, to try to improve her health.

‘The harsh winters of New Jersey made it that much harder on my inflammatory arthritis, adding to the discomfort I was in,’ says Kelly. ‘My hope was that I’d find some relief in Hawaii, but the weather didn’t make much difference.’

Her job as a teacher became difficult as the condition continued to worsen. ‘I would really push myself to get through the day, and then I would come home, ice my legs to help with the pain and the ulcerated skin and basically stay on the couch until I had to do it all over again the next day.’

After two years, aged 26, she had to quit the job she loved as ‘the colitis was so bad that I lost about 30 lbs in a few weeks. From that point, I was completely debilitated and disabled’.

Kelly and Sean, who runs his own carpentry business, returned to New Jersey and, two years later, in 2017, her doctors delivered a bombshell. ‘They told me: “You’ve been on every drug that’s available. From now on, you’re going to be on high doses of prednisone,”’ recalls Kelly. ‘I was crushed.’ Then she remembered Dr Tracey.

She went online and discovered that SetPoint Medical, a company working with Dr Tracey’s research, had just begun recruiting for a trial to see whether bioelectronic medicine might be effective in treating Crohn’s.

The hitch was that the trial was being conducted in Amsterdam.

Without even knowing whether she’d be accepted on to the trial — she needed tests to find if the ulceration of her bowel was great enough to meet the study’s strict inclusion criteria — Kelly and Sean ‘sold everything that wasn’t nailed to the floor’ and went to Holland.

On June 22, 2017, Kelly underwent a 45-minute operation under general anaesthetic to have the device inserted into her chest. This was connected by a wire to the vagus nerve in her neck.