Being obese may double the risk of needing hospital treatment for the coronavirus, according to a major study.

British scientists trawled through data for more than 428,000 people who were part of the UK Biobank.

Some 340 of those tested positive for COVID-19 in hospital - one of the only places to access a test in the UK - amid the pandemic.

Being overweight or obese increased the risk of ending up in hospital with the killer infection by 1.6-fold and 2.3-fold, respectively.

And for every BMI increase of four-and-a-half units, the risk of dying from COVID-19 rose by about 25 per cent, Glasgow University experts said.

Obesity leads to conditions such as type 2 diabetes and heart disease, both of which are known to make patients more vulnerable to COVID-19.

But extra fat may also lead to inflammation within the body, heavily linked to grave complications. An overproduction of inflammatory markers results in what has been described as a 'cytokine storm', which can be deadly for coronavirus patients.

Other scientists have suggested fat cells harbour vital immune cells needed to fight the infection, or make large amounts of a protein used by the virus to latch on to human cells.

The findings uncovered several other risk factors for hospitalisation with COVID-19, including smoking, being of BAME background and sleep apnoea. 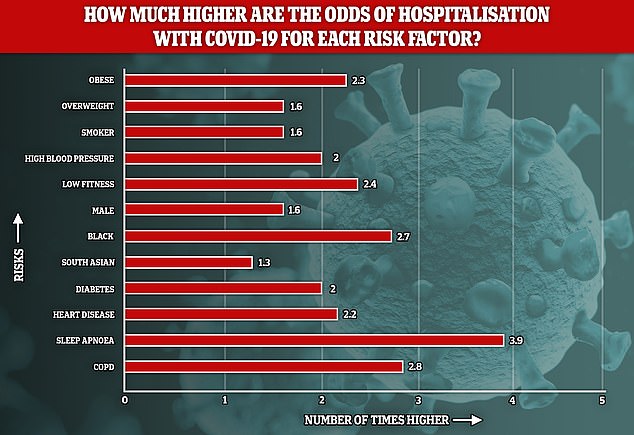 Being overweight or obese increased the risk of ending up in hospital with the killer infection by 1.6-fold and 2.3-fold, respectively. Other important findings included that black people have a 2.7-fold higher risk of testing positive for the virus in hospital, while the risk for people of South Asian descent was 1.3-fold higher 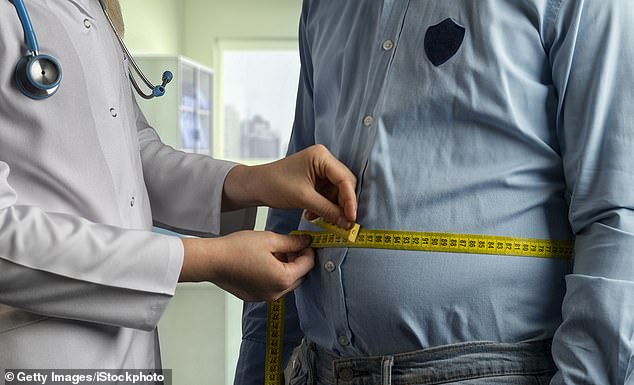 Being overweight or obese increased the risk of ending up in hospital with the COVID-19 by 1.6 or 2.3 times, respectively, University of Glasgow found (stock)

The team took their data from the UK Biobank, which recruited 37-70 year olds in 2006-2010 from the general population.

BMI, smoking status, walking pace - a measure of fitness, ethnicity and any health conditions were collected at the time.

Lead researcher Dr Paul Welsh said although the data had been collected 10 years ago, the information was likely to be the same, The Times reported.

The recent outcome of a confirmed positive COVID-19 test, given by Public Health England, was provided and compared with the Biobank data.

The preliminary results showed that extra weight was a risk factor for ending up in hospital with COVID-19.

While being overweight rose the risk by 60 per cent, being underweight led to a small increased risk of five per cent.

Dr Welsh said although obese people are more likely to end up in hospital with COVID-19, the differences in BMI 'is part of the picture, but certainly not all of it'.

He told MailOnline: 'I think the study adds to the picture we are getting from a range of different sources that people who have a higher body mass index are a bit more likely to get more severe symptoms, and to require medical attention.

'What we see in this study from a general population is that it’s a graded association.

'It's not that there is a threshold of “obesity” beyond which the risk suddenly goes up, it looks like the more body fat, the higher the risk of testing positive in a hospital setting.

'[It] indicates that the patient is probably getting symptoms that mean they seek healthcare. So it’s a pretty consistent picture.'

Dr Welsh added that the paper had not been peer-reviewed by other scientists. It is published on the pre-print site medRxiv.

FAT CELLS ARE A TARGET FOR THE VIRUS, EXPERTS SAY

The reason why obese people may be more at risk of dying from coronavirus could be because their fat cells make large amounts of a protein used by the infection to infiltrate human cells.

In a 'perspective' paper published in the journal Obesity , the researchers explained the link between obesity and COVID-19 that has emerged.

The coronavirus - scientifically called SARS-CoV-2 - latches onto ACE-2 receptors, known as the 'gateway' into cells inside body.

Fat might therefore 'serve as a viral reservoir', warned Dr Kruglikov and his colleague Philipp Scherer of the University of Texas Southwestern Medical Center, Dallas.

The scientists also explained that fat cells may drive the production of a type of cell called myofibroblasts.

Myofibroblasts are a major driver of pulmonary fibrosis - scarring of the lung tissue which reduces the organs function and oxygen intake.

Infected patients have been found to have pulmonary fibrosis in their lungs, but it was likely already present before they became ill.

The risk of pulmonary fibrosis, which develops over time, increases with age. It is especially high in people over the age of 65.

The scar tissue can destroy the normal workings of the lungs and make it hard for oxygen to get into the blood, causing shortness of breath.

The presence of pulmonary fibrosis is 'likely to influence the clinical severity of COVID-19', the scientists said.

Some researchers now believe diabetes drugs could be used to fight the infection - and admitted that losing weight may also have a benefit.

The evidence is not concrete but data from hospitalised COVID-19 patients suggests obese people are more likely to die than those who are slim.

Body mass index (BMI) is calculated by dividing weight in kilograms by height in metres squared.

Around three in ten adults in England are clinically obese – a BMI above 30. The rate is among the highest in the Western world.

According to data from NHS hospitals, 75 per cent of COVID-19 patients in intensive care are overweight, compared with 65 per cent in the general population.

An increase in circulating inflammatory markers can negatively impact on the immune system and metabolic health, the team said.

But in abundance, they could lead to a 'cytokine storm' - when the immune system goes into overdrive and starts attacking healthy tissue.

It's known to play a major role in some COVID-19 deaths by causing multi-organ failure.

The Glasgow team added that obesity increases thrombosis, which is relevant considering an emerging link between COVID-19 and deadly blood clots.

Other important findings included that black people have a 2.7-fold higher risk of testing positive for the virus in hospital, while the risk for people of South Asian descent was 1.3-fold higher.

Coronavirus has claimed more than 30,000 lives in the UK already – and a concerning high proportion of them are from BAME groups.

A government review is analysing how factors including obesity, ethnicity and gender can affect the impact of the virus on people's health.

Yesterday, Health Secretary Matt Hancock said 'the age profile and factors like obesity' should be taken into account when considering the UK's shocking death toll.

The Glasgow analysis found both men and smokers had 60 per cent higher odds of testing positive in hospital, and the risk increased by 10 per cent for every five years of age.

Men have been repeatedly flagged as more at risk than women, which could be due to genetic differences, scientists say. 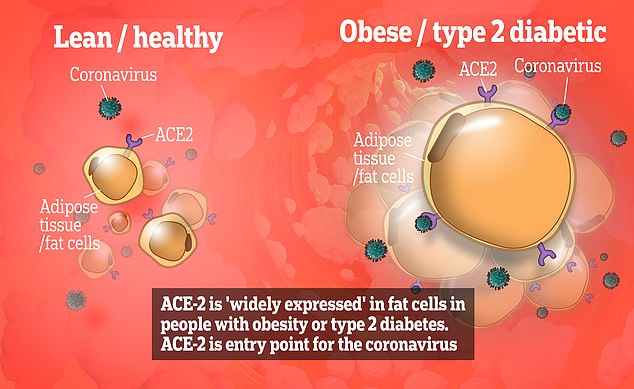 The coronavirus - scientifically called SARS-CoV-2 - latches onto ACE-2 receptors, known as the 'gateway' into cells inside body. Fat cells 'widely express' ACE-2 receptors, which may explain the link between obesity and severe COVID-19, according to researchers who wrote a 'perspective' paper published in the journal Obesity yesterday

PREV health care Hold onto your boarding pass. How TSA screening procedures are changing because ...
NEXT health care Feeding strawberries to cows: Farmers get creative as fruit and flowers perish ...