Canned and frozen foods tend to be seen as less nutritious than fresh versions — but that’s not always the case.

According to a recent Which? report, frozen and canned foods may contain more nutrients, as well as being less wasteful since they don’t go off before you’ve had a chance to use them.

‘Though, in theory, fruit and veg fresh from the field are the most nutritious, as the vitamins and minerals are all intact (they decline naturally over time), this might not be the case after produce has been transported to the store, sat on the supermarket shelf for a while and then languished at the back of your fridge for a week,’ says Helen Bond, a dietitian based in Derbyshire.

‘In fact, many foods that are frozen contain just as many nutrients as fresh produce because they are frozen quickly so nutrients are retained.’ 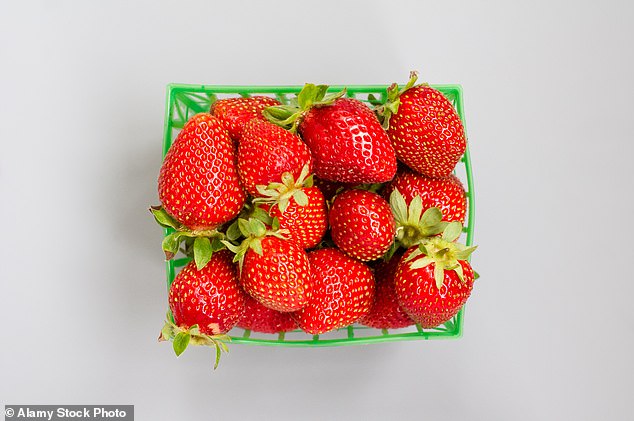 And although the canning process — which involves heat-sterilising food in a sealed container to kill micro-organisms — can reduce some nutrients that are damaged by heat, others stay stable until you open it.

A 2015 study in the journal Nutrients found that people who consumed more than six canned food items a week had higher amounts of 17 essential nutrients, including potassium (good for maintaining healthy blood pressure), calcium (for strong bones) and fibre (needed for good digestive health) than those who ate fewer than two canned foods a week.

So which option is really the best? We asked Helen Bond to assess the nutritional content of common foods that can be consumed fresh, tinned or frozen — and we then picked a winner. 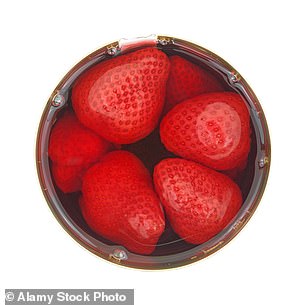 As well as counting as one of your five-a-day, seven (80g) fresh strawberries supply more than half (57 per cent) of an adult’s daily vitamin C, needed for healthy skin and immune system, and a quarter of the daily vitamin B9 (folate), which helps make healthy blood and reduces tiredness. But strawberries lose 30 per cent of their vitamin C within three days of harvest, according to research published in 2015 by the University of California. Check the strawberries are firm and glossy as this is a sign they are higher in vitamins.

Nine canned strawberries count as one of your five-a-day because they tend to be smaller than fresh. Also the canning process roughly halves the vitamin C content and slashes levels of folate by 90 per cent as these compounds get damaged by heat. The main issue with canned strawberries, though, is the syrup most are kept in — a typical half-can serving eaten with the syrup contains seven teaspoons of sugar (some comes naturally from the strawberries but the majority is added) — a third of an adult’s daily limit, which can contribute to tooth decay and weight gain. 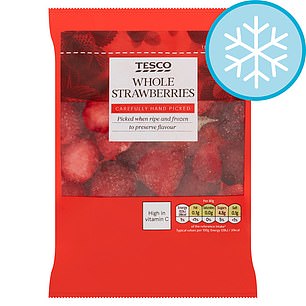 While frozen strawberries win due to their preservation of vitamin C

All the vitamin C of the freshly harvested fruit is retained because the strawberries are frozen at source — and the nutrients are intact three months later, according to the 2015 University of California study. Freezing may also increase the amount of anthocyanins — plant pigments that give the fruit its red appearance and have been linked with healthier blood vessels. Consume quickly once thawed and don’t miss the nutrient-rich juice that drips out.

This portion has a reasonable amount of vitamin C, 10 per cent of the RDA needed to maintain a healthy skin and immune system. 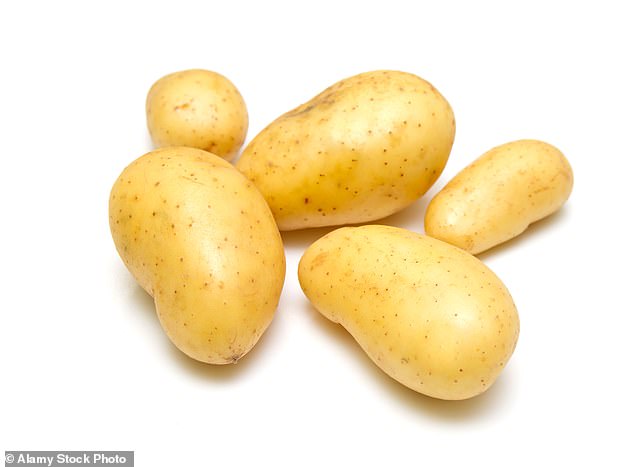 Fresh, skin-on boiled new potatoes win over canned and frozen as they offer roughly a seventh of your daily vitamin B1 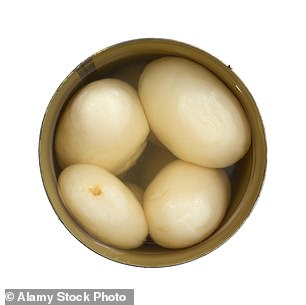 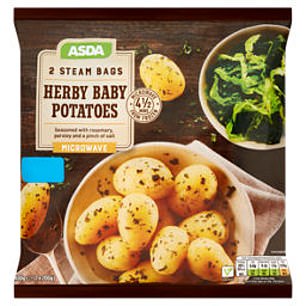 These Asda frozen potatoes have 0.5g salt per 100g

Canned potatoes have a lower glycaemic index than fresh, meaning they don’t raise blood sugar levels as much, which is better for people with type 2 diabetes.

This happens as cooking then cooling the potatoes during the canning process increases levels of resistant starch, which isn’t broken down into sugar.

However, levels of B vitamins are much lower — a 120g portion has just 2 per cent of our daily vitamin B1, and folate is reduced by around 50 per cent of fresh food levels. Fibre levels are also lower, as the potatoes are peeled.

These Asda frozen potatoes have 0.5g salt per 100g — less than 10 per cent of the daily limit, but still more than in unsalted, fresh boiled spuds. As with canning, freezing creates more resistant starch in potatoes, so they raise blood sugar less than fresh ones.

You might lose more vitamins than with fresh as prepared this way, the potatoes are heated twice.

An 80g portion (about three tablespoons) of boiled peas has around 16 per cent of your daily vitamin C and half your daily vitamin B1 (thiamin), needed for a healthy nervous system. But these figures are for recently harvested peas, not those that have been hanging round for a few days. One analysis showed vitamin C levels drop by 15 per cent seven days after picking, due to natural declines after produce is cut (which can be hastened by light or being kept out of the fridge). So if you pick them yourself, consume on the day. If buying, softening or wilting of fresh produce indicates nutrients in decline. 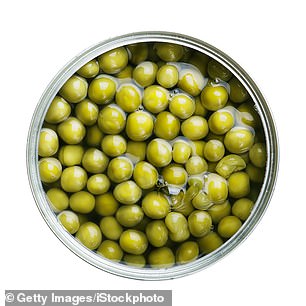 There's more iron in canned peas than frozen or fresh ones, with three tablespoons (80g) providing 11 per cent of your daily recommendation, which helps fight fatigue. Canning pretty much wipes out all the vitamin C in the peas, but folate levels are very similar to fresh boiled peas — a tenth of your daily needs is found in an 80g portion. It is thought that peas used for canning may be more mature than those that are picked to be frozen, which could explain the differences in iron, folate and vitamin C levels.

Frozen peas are blanched and frozen within hours of harvesting. The blanching process — plunging the peas into boiling water to inactivate the enzymes that could cause spoilage — affects vitamin C a little, but levels are still high and stay that way. Levels of folate are marginally higher than fresh or canned, with an 80g serving providing 12 per cent of your daily needs, versus 11 per cent in cooked fresh peas. An 80g serving of fresh, canned or frozen peas counts as one of your five-a-day. 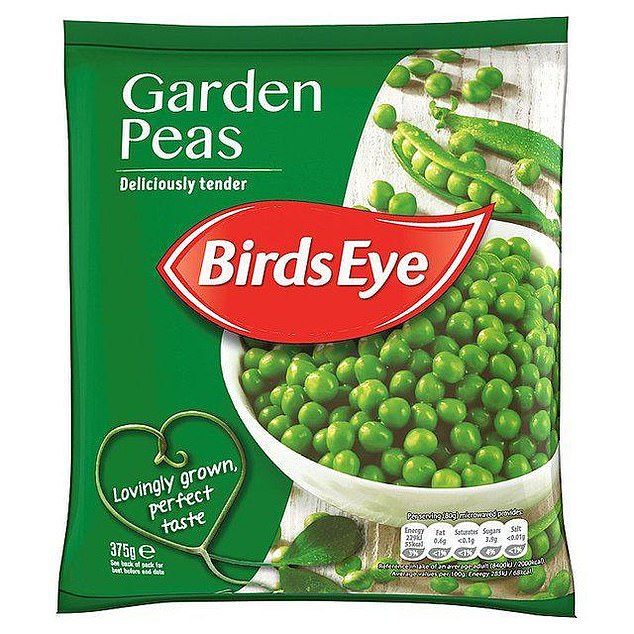 Levels of vitamin C in spinach can drop dramatically in the fridge — by 75 per cent in seven days, according to research.

Putting them in the salad drawer, where humidity is higher, is best for preserving vitamin C, or store in an airtight container. 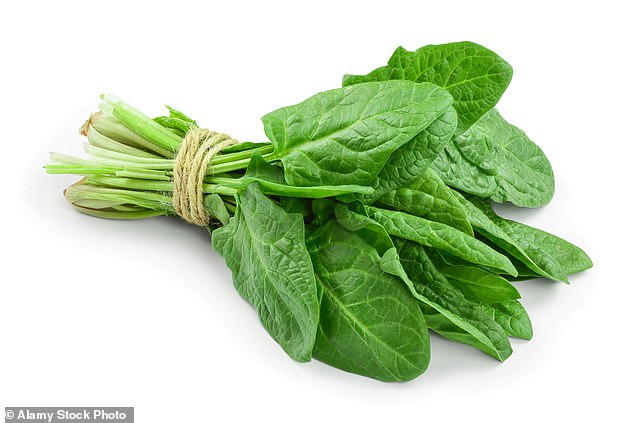 Canned spinach, which works well stirred through pasta, has similar levels of nutrients such as iron and vitamin A, important for immunity and eyesight, and vitamin E, as fresh cooked leaves. 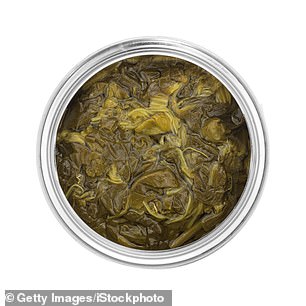 Vitamin C levels can be higher in canned than in fresh, boiled spinach

However, vitamin C levels can be higher in canned than in fresh, boiled spinach, because there’s less water for it to leach away into the can.

Canning cuts the folate levels in raw spinach because this vitamin is sensitive to heat — though folate is also depleted when fresh spinach is cooked. An 80g portion has 29 per cent less calcium than fresh raw, but still supplies levels similar to half a glass of milk.

Many of the nutrients of fresh spinach are preserved when the leaves are fast-frozen at source. Vitamin C levels are higher in frozen spinach than when it is stored at 4c (refrigerator temperature) for more than ten days. You’ll get a bit more vitamin A from frozen, too — an 80g cooked serving provides your daily requirement, compared to 64 per cent from fresh.

Frozen spinach is lower in folate than freshly harvested spinach — unless the latter has been left hanging about for days. 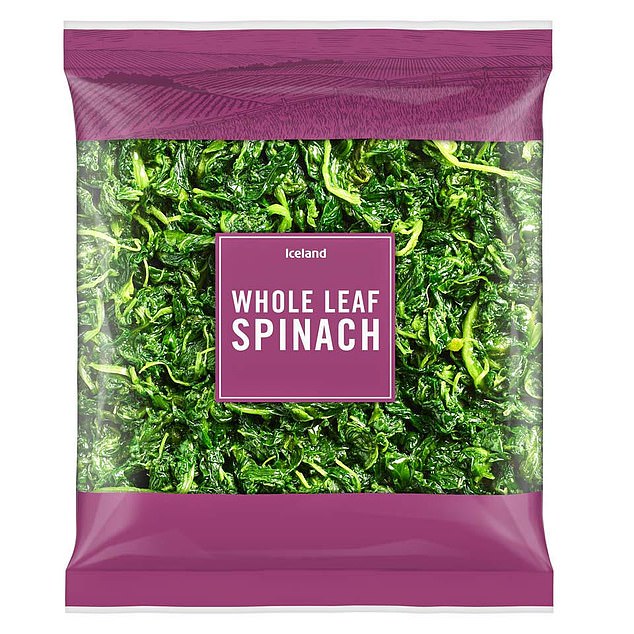 Frozen spinach is lower in folate than freshly harvested spinach 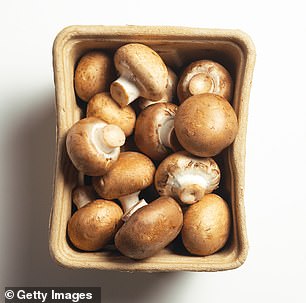 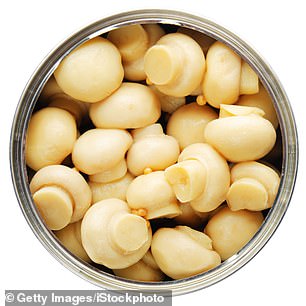 The B vitamins in mushrooms are reduced by the canning process

The B vitamins in mushrooms are reduced by the canning process — some quite considerably. For example, while vitamin B2 is 7 per cent lower in canned mushrooms,

PREV Covid spread from girl, 13, to 11 other family members in a house
NEXT Cancer-stricken Public Health England official slams ban on assisted dying