‘Coming through with the Mike Dean energy’: On loan Liverpool striker Rhian Brewster cheekily shows yellow card to referee during goalscoring display in Swansea’s draw at Preston Rhian Brewster showed a yellow card to the referee in Swansea's draw at Preston The forward scored the equalising goal for the Swans in a 1-1 draw at Deepdale But the 19-year-old was himself booked in the second half for a bad foul

On loan Liverpool striker Rhian Brewster had an eventful afternoon on Saturday as Swansea drew 1-1 at Preston.

Not only did Brewster bundle in the equalising goal at Deepdale, he also had spectators in fits of laughter when he showed a yellow card to referee Geoff Eltringham.

Eltringham had inadvertently dropped the card and Brewster, who scored his second goal in his fourth Swans appearance, emulated Paul Gascoigne by theatrically thrusting the card towards the official. 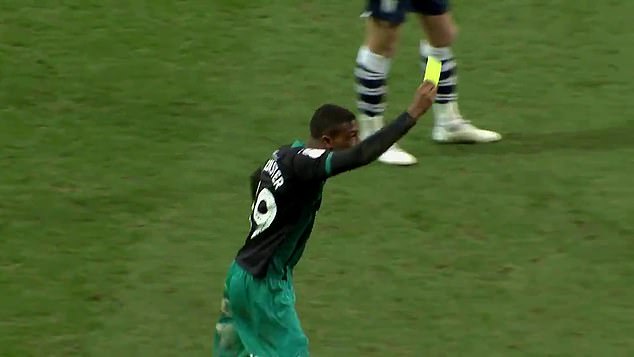 sport news Nicholls has high hopes for Politologue and Dynamite Dollars in the Queen ...