'It is Leipzig against Tottenham, not Mourinho v Baby Mourinho': Julian Nagelsmann insists Champions league clash is about the action on the pitch and not the men on the touchline Tottenham face RB Leipzig in a potentially tricky Champions League last-16 tie  Julian Nagelsmann was dubbed 'Baby Mourinho' when he exploded on the scene It is the German's first Champions League knockout tie in his flourishing career Mourinho is experienced in knockout football and Spurs are in good form

RB Leipzig head coach Julian Nagelsmann insists his side's Champions League clash with Jose Mourinho's Tottenham is not the master versus the apprentice.

Nagelsmann, 32, was dubbed 'Baby Mourinho' after making early waves as a coach, having to give up playing while still a teenager due to injury.

He became the Bundesliga's youngest ever manager aged 28 when he took over at Hoffenheim in 2016 and is widely regarded as one of European football's up-and-coming coaches. 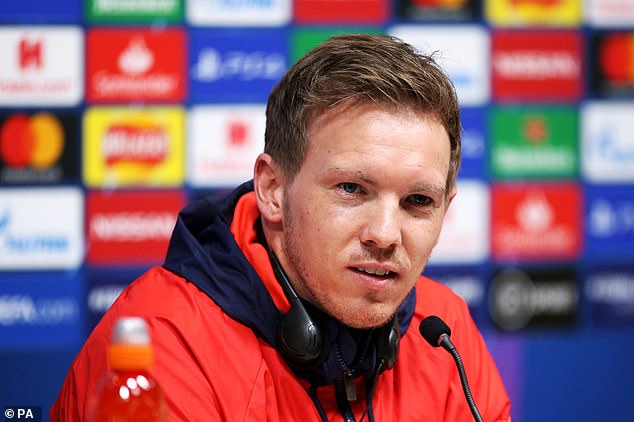 Wednesday's last-16 first leg at the Tottenham Hotspur Stadium will be his - and Leipzig's first taste of a knockout game in the Champions League, something that Mourinho is an old hat at.

The Portuguese has won the competition twice, which means Nagelsmann is full of respect for him, but says the tie is not about them.

'It is only a game between Leipzig and Tottenham. Eight years ago Tim Weise called me Baby Mourinho, but that was only for two weeks. After that he called me Julian again.

'Tomorrow it is Leipzig against Tottenham, not Mourinho v Baby Mourinho.

'I have great respect for Mourinho. He has won

Coronavirus: Nobody will die alone in hospital, we’ll be with them, vows doctor

Lorraine Kelly shuts down viewer who claims guest was 'bored’ during ...