'It's getting quite dirty behind the scenes': Gary Neville says clubs at the bottom of the Premier League will get 'BULLIED' into playing again with 'unsavoury, unkind' football ignoring public call for unity Gary Neville says struggling Premier League clubs will be 'bullied' into playing Those lower down the table are against the idea of playing at neutral venues Some want relegation to be scrapped before they'll consider returning to action Neville believes Premier League talks are 'getting quite dirty behind the scenes'

Gary Neville believes talks around the Premier League resuming have become 'dirty behind the scenes' and those lower down the table will get 'bullied into playing again' as clubs jostle to try and get the season completed.

The three teams occupying the Premier League's bottom three places have been warned that relegation could be imposed on them if they continue to obstruct plans to resume the season next month at neutral venues.

Clubs are due to meet to discuss Project Restart on Monday and those desperate to restart the season could demand a vote to determine the relegation issue if Norwich, Aston Villa and Bournemouth don't back plans to resume. 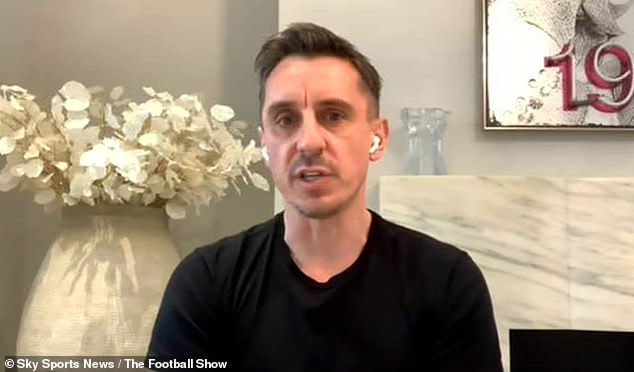 Aston Villa, Norwich and Bournemouth sit in the bottom three and could be relegated by way of a vote if they continue to obstruct plans to resume the season next month at neutral venues

The current bottom three had not been the most vocal in objecting though with Brighton, West Ham and Watford also among the clubs against the current proposals.

But it is the first major sign of in-fighting within the top flight as clubs battle to save themselves from further financial losses brought on by the coronavirus pandemic.

And, speaking on Thursday's The Football Show on Sky Sports, Neville insisted the bickering was becoming 'unsavoury' and warned some clubs may be 'bullied' into playing again.

The Manchester United legend said: 'There is no doubt we have got a divided Premier League in terms of what the clubs want. The message

PREV A-League restart could be stymied by Fox demand for rights fee cut mogaznewsen
NEXT sport news Premier League clubs 'to vote next week on Project Restart' and government may ...

collection
The Sydney Morning HeraldWednesday 27th May 2020 10:22 AM