Thiago revels in role as Jurgen Klopp's midfield maestro as Liverpool new boy outpasses EVERY Chelsea player despite only playing 45 minutes... this cameo offered a tantalising glimpse of what the next dimension for the Reds might be Thiago showed his class with an impressive 45-minute display for Liverpool  The Premier League champion's new arrival was imperious in the second half  Despite playing just one half, Thiago made more passes than any Chelsea player Jurgen Klopp was thrilled with the impact his recent signing made on the game REPORT: Sadio Mane DESTROYS Chelsea as Liverpool star nets quickfire double

‘I was created in Barcelona and every midfielder must touch the ball. You develop your own skills but the one thing you must do is move the ball. You get on the ball as much as possible and you make the team play.’ Thiago Alcantara, December 2015.

You cannot say Liverpool’s latest signing does not practise what he preaches. Thrust into an immediate debut at Stamford Bridge on the back of just two training sessions, Thiago was effortlessly true to his principles.

He explained his philosophy to Sportsmail two years after he had joined Bayern Munich. Thiago’s passion for passing came pouring out and he illustrated why he was regarded as Spain’s natural successor to Xavi. 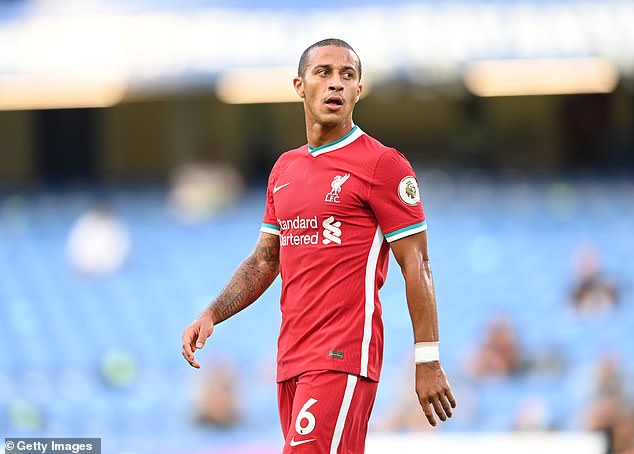 On a sultry afternoon in West London, Thiago made a deep first impression. Yes, there are bigger challenges ahead and there was a silly concession of a penalty. Controlling the game against 10 men is different to dealing with the rough and tumble of the division’s more combative sides.

But take note of the numbers: Thiago had 89 touches after he was introduced for Jordan Henderson, Liverpool’s captain having been withdrawn to a protect a tight thigh, and made 75 passes — more than any Chelsea player managed in the entire 90 minutes.