NASA's specialised planet-hunting spacecraft searching for signs of alien life has spotted an Earth-sized world within its star's habitable zone.

Dubbed TOI 700 d, the planet is just 100 light years away and is slightly larger than Earth.

It has a much swifter orbit than Earth, taking just 37 days to complete a trip around its star.

TOI 700 d also receives just 86 per cent of the energy Earth does, due to its star being around 40 per cent the mass of our Sun and only half as hot.

Its presence within the habitable zone and its size offers hope that it may host liquid water, but this has not yet been confirmed.

The breakthrough from the TESS spacecraft was announced during the annual American Astronomical Society meeting in Honolulu, Hawaii. 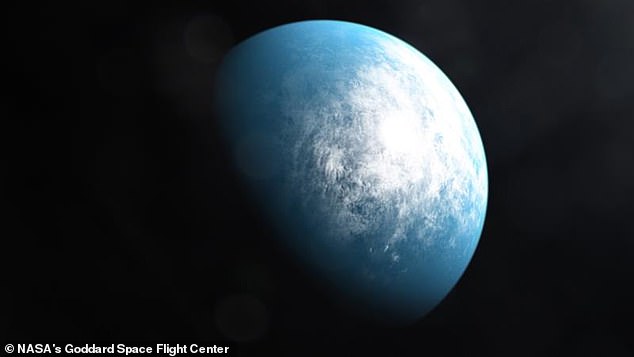 Dubbed TOI 700 d, the planet is just 100 light years away, exceptionally close on the scale of space. It is slightly larger than Earth and has a much swifter orbit time of just 37 days

TESS found three planets around the star, with only one inside the habitable zone, where the temperature would allow for liquid water to exist on its surface.

The exoplanet - a world orbiting a star that is now our Sun - was almost missed by astronomers after an initial error wrongly categorised the star and its planets.

Scientists wrote the planets off as non-viable for extraterrestrial life as they were thought to be too big and too hot.

But a team of amateur astronomers, including a high school student, identified the error and corrected it.

'When we corrected the star's parameters, the sizes of its planets dropped, and we realised the outermost one was about the size of Earth and in the habitable zone,' said Emily Gilbert, a graduate student at the University of Chicago.

The discovery was later confirmed by the Spitzer Space Telescope.

Similar planets have been identified before, including some spotted by the now defunct Kepler Space Telescope.

But this marks the first such world spotted by TESS after its 2018 launch.

TESS spots distant planets with a patient approach, it studies the image of stars in a specific region of the night sky and waits for objects to pass in front of it.

These transits often indicate the presence of an orbiting planet making its way around the star and the drop in the star's luminosity is analysed to provide clues to the world's size, speed and chemical composition of its atmosphere.

WHAT IS TIDAL LOCKING?

Tidal locking is the phenomenon which sees a moon appear fixed in place around a planet, with only one