World's first smart wooden STICK debuts at CES that helps parents track their children's height and lets kids doodle on the wall without leaving a mark The project is a collaboration between Japanese companies Wacom and Mui Lab It's built around a wooden beam with thin layer of LED lights and touch sensors Owners use a digital pen to draw on the wood, which is then saved in the cloud The designers hope the device will be used to revive the tradition of measuring children's heights with lines on the wall

A new collaboration between the graphic design supplier Wacom and the Japanese smart home startup Mui Lab Inc. will attempt to bring back the old fashioned tradition of marking children’s heights on the wall.

Demonstrated at CES 2020 in Las Vegas this week, the new collaboration is called Pillar Memory and is built around a wooden post with a thin layer of white LED lights and capacitive touch sensors.

Users can write directly onto the LED lights in the post using digital pens designed by Wacom, which can be used to create soft white LED-lit lines that record a child’s height. 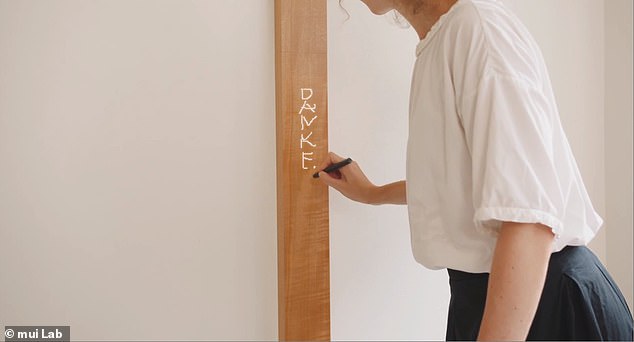 Pillar Memory is a new collaboration between Japanese startup Mui Lab and graphic design supplier Wacom, which will let people use a digital pen to create LED drawings on a specially designed wooden post

The lines will fade after a few seconds, but will be recorded in cloud storage via a Wi-Fi receiver that will come embedded in the wooden post, according to a report in Gizmodo.

The cloud storage system will also be able to keep track of height data for multiple siblings or family members so the whole family can chart their relative growth.