Japanese firm unveils the official torch for 2020 Olympics, which can keep its flame alive in heavy rain, 38mph winds, and was made with recycled aluminum from shelters used after the 2011 Fukushima disaster Shinfuji Burner Co. has revealed the official torch for the 2020 Olympics It was inspired by the cherry blossom flower and made with recycled materials The torch blends two different kinds of fire and can withstand wind and rain

Today in Japan, the official torch that will be used in the 2020 Paralympic Torch Relay leading up to the Summer Games in Tokyo was unveiled.

The torch was designed by Shinfuji Burner Co, has produced camping stoves, gas lanterns and a variety of other gas illumination devices.

The design features a central cylinder wreathed by five outer cylinders meant to evoke the five petals of the cherry blossom flower. 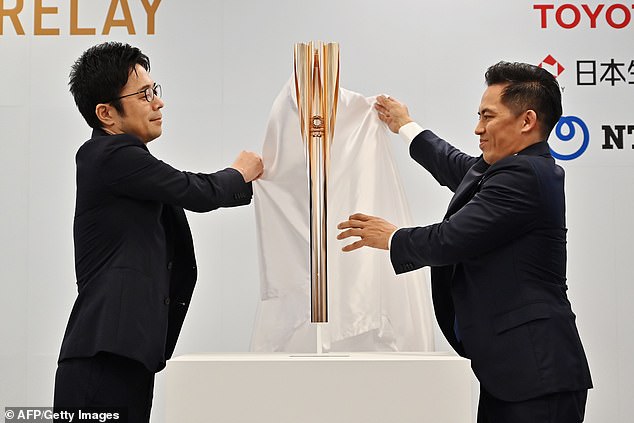 The torch for the official 2020 Paralympic Torch Relay was unveiled in Japan, designed by Shinfuji Burner Co.

Each of the five outer cylinders will carry a flame that will mix together at the top of the torch, and the center cylinder will have a second blue flame made with a higher oxygen mixture that will allow it to withstand extreme weather.

According to a report in The Asahi Shimbun, the flame will be able to withstand winds of up to 38mph and rainfalls of up to two inches per hour.

‘It would be unforgivable if the flame were to die out