The presence of someone else when we’re eating makes us switch to a 'foraging tactic’ that makes us eat reach for small food portions more regularly, scientists say.

Japanese experiments found that even when there was no real competition for food, humans in pairs reached for smaller portions of crisps, but more frequently.

This compared to participants in the study that were on their own who, in comparison, grabbed bigger portions of potato chips less frequently.

The research team compared the results to groups of mammals and birds that automatically eat small portions quicker in the presence of a 'food rival’. 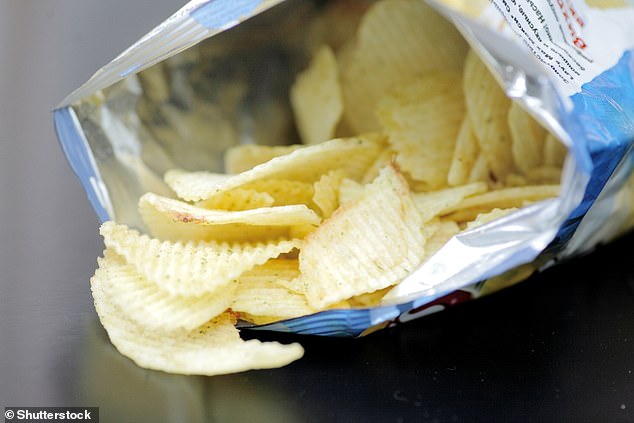 Humans and other animals may have a built-in systems that automatically triggers the shift in the presence of others.

‘Our results showed that the behavioural shift was triggered by the mere presence of a co-eater, even without competition,’ the researchers write in Royal Society Open Science.

‘This suggests that the underlying mechanism for the shift may be a built-in system that activates automatically in response to relevant social cues.’

To test whether a shift in eating behaviour would be triggered in humans, study participants were asked to engage in a lab-based ‘taste test’ alone or in pairs.

They recorded the frequency at which the participants reached for potato chips, the weight of potato chips per reach and the total amount consumed.

An electronic balance that was invisible to subjects was place under the plates to record the timing and weight of crisps taken with each reach.