Japan's Hayabusa2 spacecraft captures pictures of asteroid Ryugu in stunning detail after touching down on its surface The shots were taken on February 21, 2019, after months of study from orbit Researchers have used the image to interpret some of the asteroid's history At one point, it must have passed close to the Sun, reddening some of its rocks

Japan's Hayabusa2 spacecraft captured pictures of the near-Earth asteroid Ryugu in stunning detail after touching down on its surface, a new study has revealed.

The image is the latest stunner to come back from the Hayabusa2 mission, which previously landed two rovers on the asteroid in a world's first.

The shots have allowed researchers led from the University of Tokyo to determine that Ryugu once passed much closer to the Sun, which reddened some of its rocks.

Alongside pictures, Hayabusa2 also collected a sample of Ryugu, which it we be bringing back to Earth when it returns at the end of this year. 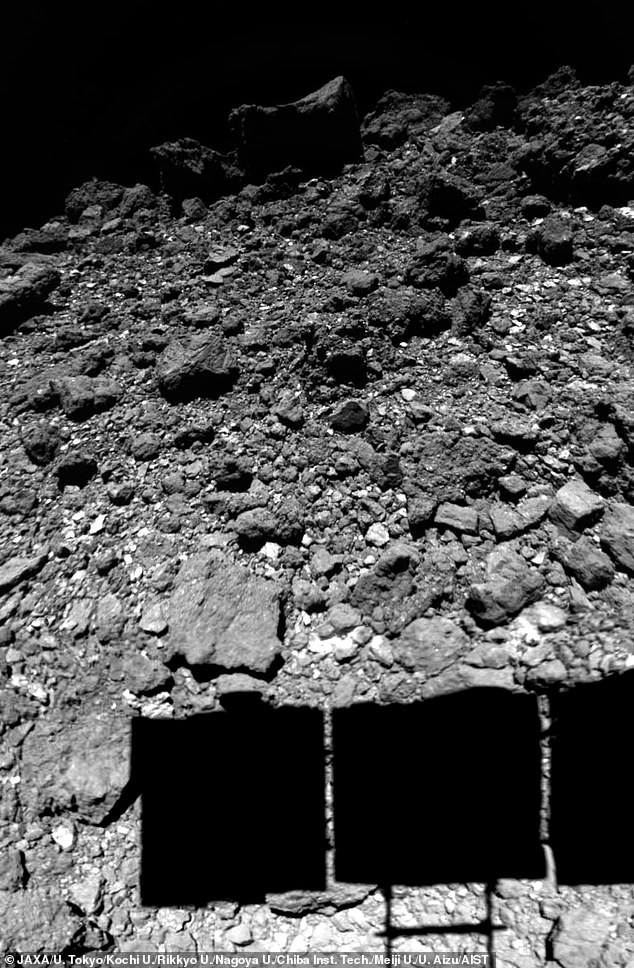 Japan's Hayabusa2 spacecraft captured pictures of the near-Earth asteroid Ryugu in stunning detail after touching down on its surface, a new study has revealed. Pictured, the asteroid's surface, with the spacecraft's solar ray paddle casting a shadow in the bottom right

The images were taken on February 21, 2019, following months of orbital observations that scientists used to determine the best location for the Hayabusa2 spacecraft to collect a sample of the carbon-rich asteroid's surface.

Previous observations made by Hayabusa2 have shown that Ryugu — which orbits for the most part between the orbits of Earth and Mars — has a surface composed of two types of material, one redder, the other bluer.

Analysis of the high-resolution images taken of the asteroid's surface — including the disturbances caused by the spacecraft's sampling manoeuvre — have allowed researchers to analyse the geology and likely history of Ryugu's surface.

'Immediately after touchdown, Hayabusa2’s thrusters disturbed dark, fine grains that originate from the redder materials,' wrote planetary scientist Tomokatsu Morota of the University of Tokyo and colleagues in their paper,

collection
The Sydney Morning HeraldSaturday 30th May 2020 02:23 AM