A breakthrough in stem cell research allowed scientists to create 'surrogate sires' that produce sperm with the genetic traits of a donor animal.

So far the new technique has been used to create pigs, goats and cattle with the sole purpose of producing sperm with the DNA of another male.

Researchers from Washington State University say it could one day solve starvation for the world's growing population - or save species from extinction.

Surrogate 'super dads' will dramatically boost the quality of livestock by allowing farmers to select the strongest DNA of each breed to reproduce.

In experiments, mice have already fathered healthy offspring who carried the genes of donor rodents - larger animals carrying donor sperm have yet to breed. 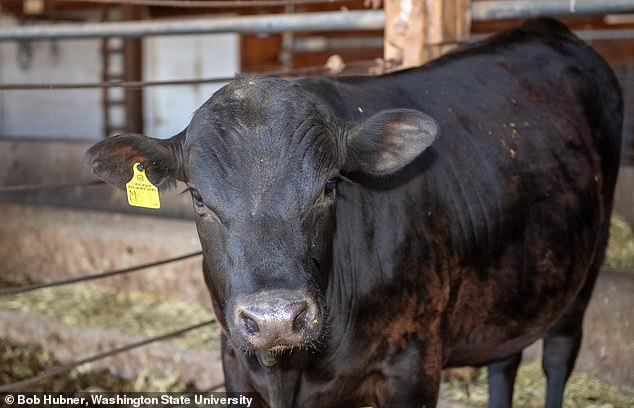 This is a gene-edited surrogate bull. It can't produce its own genetic offspring but in future its sperm will carry the genetic material of another bull and will pass it on to cows

The new technique, developed by Oatley and colleagues, could have a 'major impact' on addressing food insecurities around the world.

The new technique involves switching off the NANOS2 gene in the embryo of a target animal.

This 'switches off' the ability for males of the species to reproduce.

When they can reproduce - stem cells from a donor animal are transplanted into their testes.

Then when they reproduce they only pass on the transplanted DNA.

Artificial insemination is rarely used with beef cattle who need to roam freely to feed and in pigs the animals have to be nearby as their sperm doesn't last long.

This enables farmers to let their animals interact normally.

Donors and surrogates do not need to be near each other since either frozen sperm or the animal itself can be shipped to different places.

'We can tackle this genetically, then that means less water, less feed and fewer antibiotics we have to put into the animals,' Oatley of Washington State said.

They used a gene editing (GE) tool called CRISPR-Cas9 which has been described as a pair of 'molecular scissors' - snipping DNA using a harmless virus.

Unlike genetic modification, nothing is added from another species - it is just the selection of the best DNA from other members of the same species.

Oatley and colleagues removed a male fertility gene called NANOS2 in the embryos of pigs, goats, cattle and mice that would be raised as 'surrogate sires'.

These mammals then grew up sterile, but otherwise healthy. They began producing sperm after stem cells from donor animals were transplanted into their testes.

It held only the genetic material of the selected creatures - nothing from the surrogate sire.

The groundbreaking procedure only seeks to bring about changes that could occur naturally - such as infertility, according to the transatlantic team.

Oatley's lab is now refining the system before the next step - getting offspring from the surrogate pigs, goats