Facebook's first pair of smart glasses — made in collaboration with luxury eyewear manufacturer Ray-Ban — is to be released next year, the tech firm has revealed.

The announcement coincided with CEO Mark Zuckerberg revealing his vision for the future of augmented reality (AR) — bringing holograms of friends into your home.

While this dream may seem especially appealing amid present coronavirus-related restrictions, however, such a future may still be some way off.

In fact, the smart Ray-Bans will not have an integrated display, the Verge reported — but may feature recording capacity or a voice-activated assistant.

Facebook has confirmed that the product will operate by pairing with a phone.

The tech firm has also previously indicated it is developing audio features for augmented reality which will make sounds from speakers sound more authentic.

Furthermore, its researchers are working on developing technology to facilitate 'perceptual superpowers' that automatically tune out background noise. 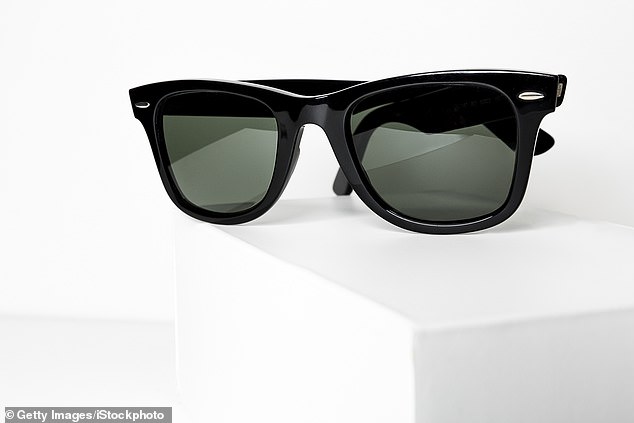 Facebook's first pair of smart glasses — made in collaboration with luxury eyewear manufacturer Ray-Ban — are to be released next year, the tech firm has revealed. Pictured, a file photo of a regular pair of Ray-Ban sunglasses, which could resemble the smart design

The announcement of the launch window for the smart glasses was made by Mr Zuckerberg during his keynote at the virtual Facebook Connect conference.

'We’re passionate about exploring devices that can give people better ways to connect with those closest to them. Wearables have the potential to do that,' Facebook Reality Labs vice president Andrew Bosworth said in a statement.

'With [Ray-Ban owner] EssilorLuxottica we have an equally ambitious partner who’ll lend their expertise and world-class brand catalogue to the first truly fashionable smart glasses,' he added.

It is unclear at present exactly what features the firm's first smart spectacles will sport — but even though the glasses will not generate an augmented reality overlay, Facebook have said that the product is part of its larger foray into the world of AR.

'They are going to be the next step on the road to augmented reality glasses, and they look pretty good too,' Zuckerberg said during a steamed presentation.

'Delivering a sense of presence is the thing that I care about. And Virtual reality and augmented reality are going to be the technologies that do that,' Mr Zuckerberg told the Verge in a separate interview.

While Virtual reality — such as, for example, Facebook's recently announced Oculus Quest 2 headset — will immerse users in a simulate environment, he said, AR will bring people into your existing environment through the use of holograms.

'So in the future, instead of a video chat, I’ll just be sitting on my couch and your hologram can just appear on the couch next to me, or I can hologram into your house,' Mr Zuckerberg continued.

'And part of why that’s going to be a lot better than video chat is that then we’ll be able to have virtual objects that we can interact with together. If we want to play a game of cards, I can have a deck

PREV Facebook's new AI can translate languages directly into one another
NEXT 'Risky drinking' is found to increase among women in their 50s and 60s, study ...

China warning: Mark Sedwill says UK has been 'naive' to Beijing and Russia’s ...

We WON'T give up! Argentina vows to press ahead with claims for Falklands ...