A deadly animal attack in the Guatemalan rainforest is being blamed on climate change that is causing animals to compete for water.

A camera trap set up at an isolated watering hole was triggered when a male jaguar attacked and killed an ocelot.

Such predator-on-predator attacks are rare, researchers say, and could be caused by abnormally fierce competition for water.

The attack happened in the Maya Biosphere Reserve in March 2019, when northern Guatemala was experiencing a severe drought.

In fact the jaguar let a large tapir, potentially a tasty meal, pass by unmolested before pounding on the ocelot as soon as it stopped to drink. 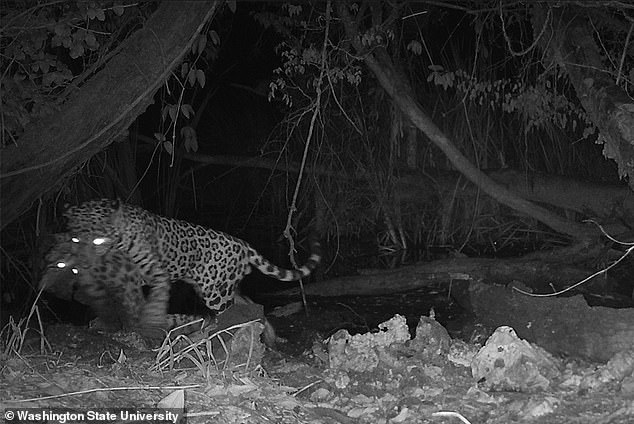 A camera trap captured the first known evidence of a jaguar killing an ocelot. Scientists believe the savage attack was the result of 'over-competition' for water during a drought exacerbated by climate change

Daniel Thornton, a professor at Washington State University's School of Environment, says 'over-competition' for water could easily make a jaguar attack another cat.

'People don't often think of tropical systems as being dry, but in many parts of the world, tropical rains are quite seasonal,' said Thornton, co-author of a report on the incident published in the journal Biotropica.

'With climate change, some of these tropical ecosystems are expected to become even more seasonal. The more isolated and rare water resources become, the more they're going to become hotspots of activity.'

Jaguars, the largest cat species in the New World, can tip the scales at over 200 pounds. 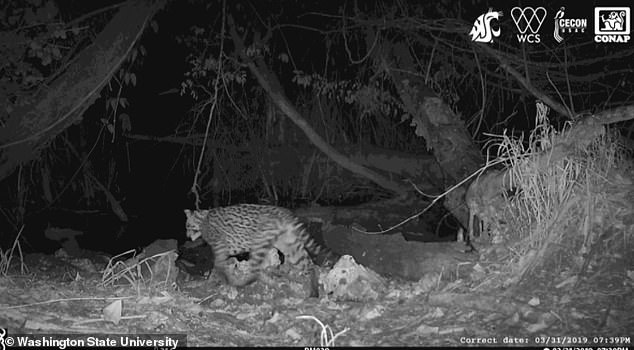 Typically loners, jaguars stalk and ambush smaller prey like wild pigs, deer, tapir and even caiman — biting through their skull with their powerful jaws to deliver a fatal blow.

Ocelots are considerably smaller, about 20 to 40 pounds, and dine on rodents, birds, reptiles and insects.

It's not uncommon for the two wild cats to bump into each other, especially at twilight, but such savage attacks are

PREV Less than HALF of people who have developed Covid-19 symptoms have requested a ...
NEXT Elon Musk reveals 'catch and quick release' plan for SpaceX's Super Heavy ...