By Daniel Martin Policy Editor For The Daily Mail

The Prime Minister will find he has ‘met his match’ in Speaker John Bercow when the Commons returns tomorrow, a former parliamentary official has warned.

David Leakey, who was in charge of order in the House of Lords until 2017, said Mr Bercow would bend parliamentary conventions to the limit in a bid to thwart a No Deal Brexit.

He is expected to start by helping Remainers take control of Commons business tomorrow to enable them to pass a law preventing Boris Johnson from leaving the EU without a deal.

The intervention is likely to be crucial as opposition MPs seek to frustrate the Prime Minister.

Last week, the Commons Speaker sparked outrage when he issued a statement – while on holiday in Turkey – condemning Mr Johnson’s plans to prorogue Parliament as ‘a constitutional outrage’. 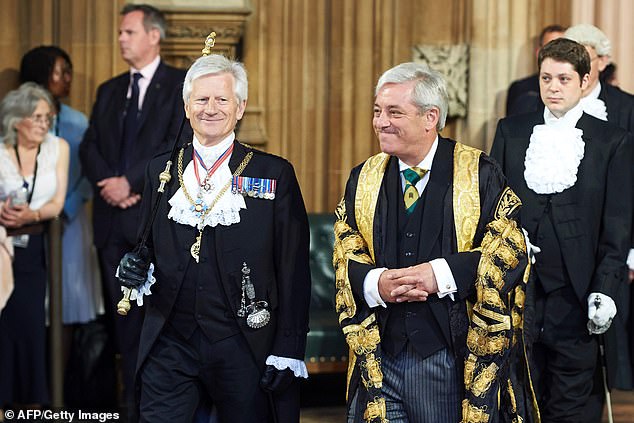 David Leakey (left), who was in charge of order in the House of Lords until 2017, said Mr Bercow (right) would bend parliamentary conventions to the limit in a bid to thwart a No Deal Brexit

Mr Leakey told the BBC’s Andrew Marr Show yesterday that he believed Mr Bercow will help Remainers ‘because Boris Johnson has been bending the conventions in relation to prorogation’.

When challenged over the Commons Speaker’s own bending of convention, Mr Leakey said: ‘I think that Boris Johnson will meet his match in the form of Speaker Bercow in this sense.’

Mr Leakey was Gentleman Usher of the Black Rod from 2010 to 2017. The position is named after the black stick used to bang on the door of the House of Commons before each Queen’s Speech. The former Black Rod said the five weeks Mr Johnson plans to suspend