EU countries including Germany and France have discussed a possible time limit to the Irish backstop to break Brexit deadlock, report says Boris Johnson believes the EU will offer the UK a time-limited Irish backstop  Northern Ireland would remain in the customs union and the EU single market The British government believe the EU will offer a sunset clause on the backstop The DUP's Arlene Foster said her party would not be opposed to such a deal

By David Churchill For The Daily Mail

European states have considered offering a time limit to the Irish backstop in a bid to break the Brexit deadlock, it was claimed last night.

The idea has been discussed in Paris and Berlin as a possible compromise in recent weeks amid tougher rhetoric from Boris Johnson on a No Deal Brexit.

However, sources in Brussels insisted yesterday that the option was not yet formally on the table and had not been discussed among all the 27 remaining member states. 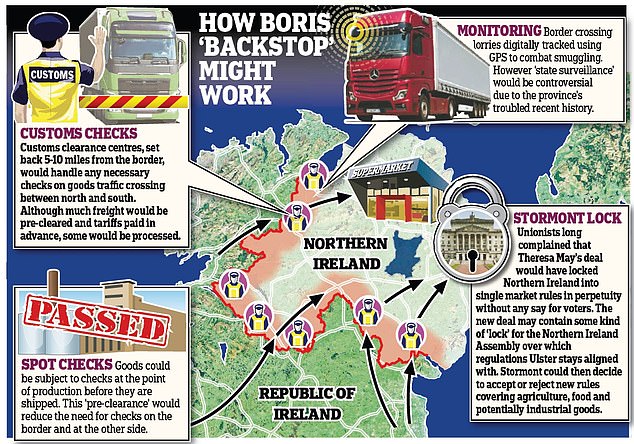 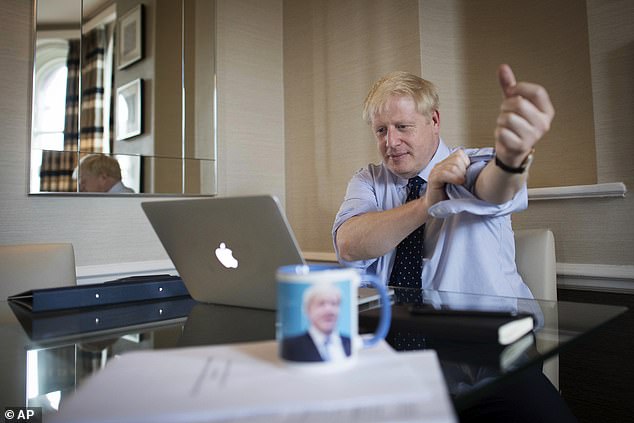 Brussels has criticised Boris Johnson, pictured yesterday in Manchester, over his 'kamikaze Brexit' strategy which he insists will see Britain leave the EU at the end of the month with or without a deal 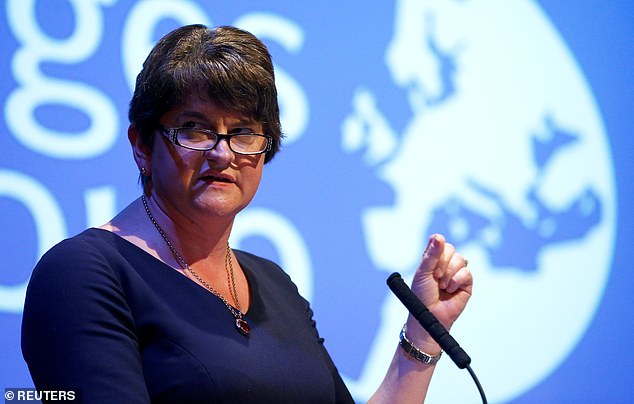 DUP leader Arlene Foster, pictured in Manchester on Monday, has indicated her party might not oppose a time-limited Irish backstop in order to facilitate Brexit

It is understood the proposal, reported by Bloomberg, would involve the UK having to accept a backstop which keeps Northern Ireland in the customs union and single market and not the rest of the UK – something Mr Johnson has previously ruled out.

However, it would have a so-called sunset clause which would give it a time limit so it could not endure for ever. Officials believe such a clause could easily be written into the current deal at the 11th hour.

It comes after DUP leader Arlene Foster suggested that she might consider a time limit on the backstop to break the impasse.

Brussels sources last night confirmed that the idea had been floated, but insisted talk of it was just ‘brainstorming’ in EU capitals. A source said: ‘It’s not been discussed at “27 level” and it’s not part of the negotiations.’

The timetable for a solution to the Irish border conundrum is becoming increasingly tight with a crunch EU summit on October 17 and 18, where the Prime Minister wants to strike a deal. He is expected to table his final offer for breaking the deadlock in a ‘legal text’ either today or tomorrow. Designed to prevent the return of a hard border in Ireland, the backstop was agreed by Mr Johnson’s predecessor Theresa May.

It has been criticised and rejected by Eurosceptic MPs who say it could lock the UK in the EU’s customs regime indefinitely.

British negotiators have suggested a time limit could help unlock a majority for the Brexit withdrawal treaty in Parliament, but it has always been ruled out by the EU. This is because it is supposed to act as an insurance policy preventing a hard border.

Brussels yesterday criticised Mr Johnson’s ‘kamikaze’ Brexit strategy and gave him ten days to strike a new deal or face the prospect of another delay.

Hopes of an agreement ahead of the summit were fading as details of one UK idea for solving the Irish border conundrum were leaked and rejected.