A viral photo showing a woman bound and gagged while her husband watches the Bathurst 1000 has sparked a heated debate online.

Hundreds of women expressed their disgust at the 'misogynistic' and 'disgraceful' image after it was shared online by domestic violence campaigner Sherele Moody.

Ms Moody claimed the photo promoted violence against women, referencing the 57 women in Australia who have been killed in 2019 alone.

But male racing enthusiasts were quick to hit back, hijacking her post to insist the photo was a 'harmless' joke being taken the wrong way. 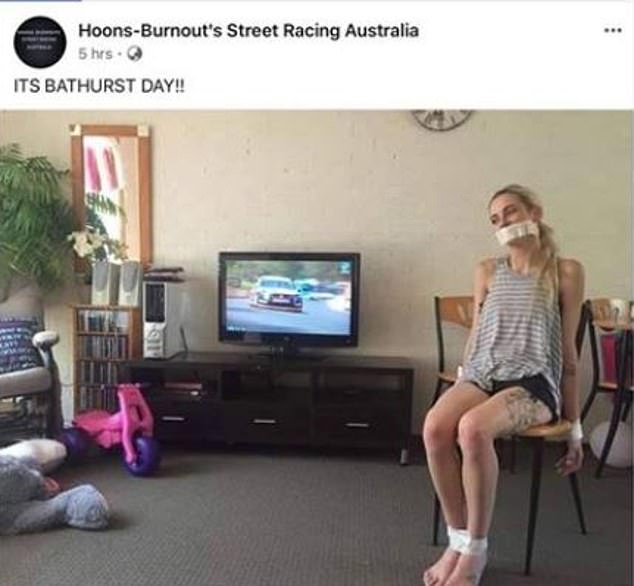 In the image, the young woman has her arms and legs tied to the back of a chair and duct tape over her mouth.

She is placed next to the television but facing the couch, while the iconic race continues on in the background.

The 1,000km race around Mount Panorama Circuit was held from Thursday October 10 to Sunday October 13.

The original source of the picture is unknown, but Ms Moody said it was an 'absolute f***ing disgrace' and 'reduced women to objects of ridicule and abuse.'

'Many thousands of women and children are likely to be beaten by drunken revheads following - and during - the Bathurst 1000,' she told her Facebook followers.

'The motor racing industry is a mysogynist's paradise so it does not surprise me that this meme encouraging domestic violence is making the rounds.'