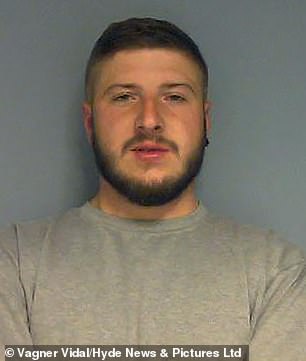 Hayden Brown, 25, 'used the road as a race track' and slammed into police officer Tom Dorman

A drink and drug-fuelled driver who slammed into a police officer in a crash that forced the officer to have his leg amputated has been jailed for five years.

Hayden Brown, 25, 'used the road as a race track' and sent police officer Tom Dorman flying through the air 'like a rag doll' after hitting him in Maidenhead, Berkshire.

Police constable Mr Dorman watched in court today as Brown was jailed for the maximum sentence of five years for the 'near death crash' that cost the policeman his left leg.

Brown, a road safety technician, was driving a group of people back to a party after buying alcohol and balloons of nitrous oxide when he lost control, slamming into PC Dorman and PC Wai-Man Lam, who were speaking to another driver they had stopped.

Prosecutor Michael Roques told the sentencing judge that PC Dorman managed to save his own life by telling a passer-by how to tie a tourniquet around his shattered leg to stop him bleeding to death as he lay in the road.

Today, Judge Sarah Campbell heard that Brown, of Maidenhead, callously ran from the scene as his own twin brother lay beneath the crushed car.

The court heard he was later discovered hiding in a bush after the horrific crash which happened on September 2 last year.

Brown attempted to blame passenger Anilh Butt, who was subject to investigation for months after the accident but was never charged.

She told the judge today of her 'traumatising' experience.

She said: 'I woke up at the scene of the crash still underneath the car, at first I could not feel my legs. I was taken from the crash to the hospital where they told me I had broken 24 bones. My injuries are still healing.

The court heard that PC Lam had been diagnosed with PTSD since the incident and his daughter has had to have counselling following his return to work.

PC Dorman pictured left before the crash and right outside court today in his wheelchair. He managed to save his own life by telling a passer-by how to tie a tourniquet around his shattered leg to stop him bleeding to death as he lay in the road

Judge Campbell, sitting at Reading Crown Court, told Brown: 'You are now 25 years old. This trial was a reflection of how you behaved by running away, putting yourself over those seriously injured at the scene, failing to accept responsibility.

'You thought you would be able to persuade the jury otherwise, you had a chance to apologise, but still you show no remorse for the trail of destruction.

'This case shows the dangers police face trying to protect the public. PC Dorman and PC Lam were on the other side of the road, there was no reason they should have come to any harm at all. You had been drinking vodka, beer and cider with balloons and cocaine.'

The judge referred to evidence about the 'shocking manner of driving' given by Anilh Butt who said: 'He was driving really fast, I had no idea why he was doing it, I knew he was into cars and racing, there was no reason for him to drive in the way he did.