A 20-year-old British Airways flight attendant killed in a car crash with a lorry just before midnight on New Year's Eve was today praised as 'kind and beautiful'.

Rachel Clark was just weeks into her new job when she died together with fellow cabin crew members Joe Finnis, 25, and Dominic Fell, 23, near Heathrow Airport.

She completed her training in November, posting on Facebook at the time how it had been a 'crazy six weeks' and her excitement for 'the start of a new chapter'.

Another 25-year-old stewardess, who was also in the car but has not been named, survived the crash in Stanwell, Surrey, and is in a serious condition in hospital.

All four cabin crew were friends seeing in the New Year together - two had finished work at Heathrow at 6pm, while the other two were off and not due to be on duty.

A 'BA Angels Fund' set up on Gofundme by fellow cabin crew member Stephen Crook for the families of those affected has now raised more than £49,000. 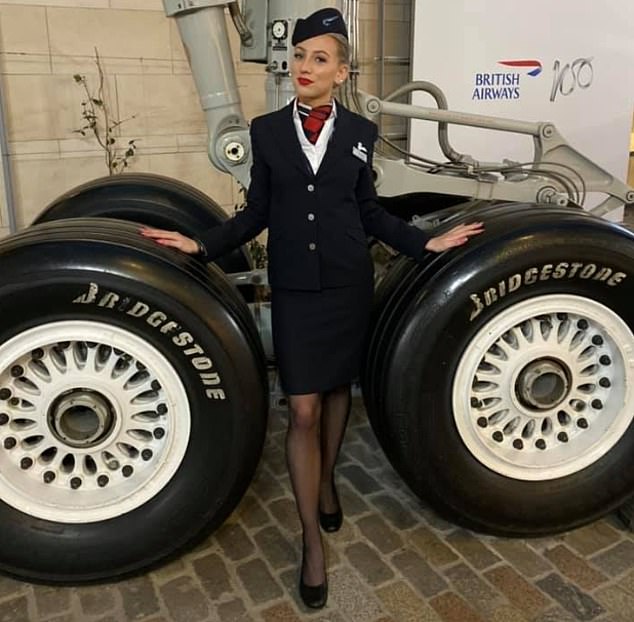 Rachel Clark, 20, died in the collision near London Heathrow Airport on Tuesday night 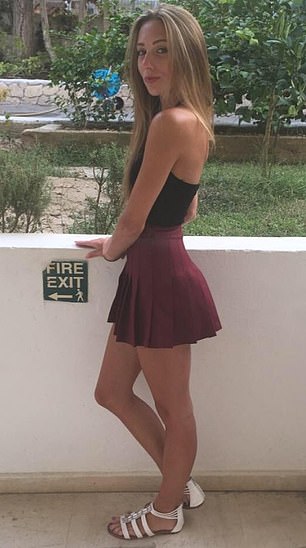 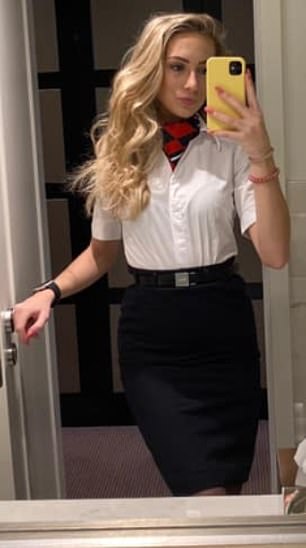 Miss Clark (above) was today praised by friends as a 'kind, beautiful and intelligent person' 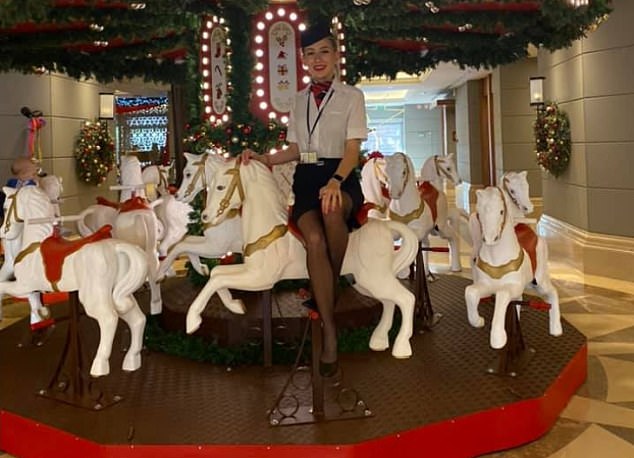 Fellow cabin crew members have changed their profile pictures on Facebook to a memorial image reading 'forever in our hearts' with the BA logo.

She posted a series of photographs on November 22 of her at a ceremony to mark the end of her training, writing: 'What a crazy six weeks it has been!

'Thank you to everyone that has supported me along the way and to this fabulous group of people for making these weeks bearable! The start of a new chapter.'

Her friend Marnee Burgess said on Facebook: 'I can't believe you're gone. I will never forget that beautiful smile that lights up every room you enter. 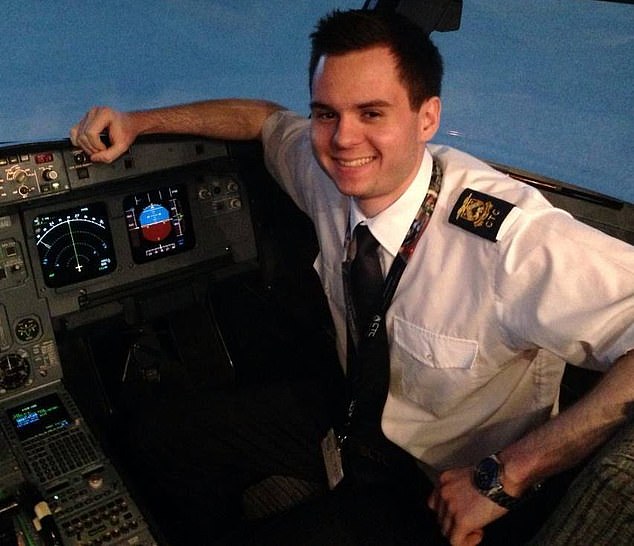 Joe Finnis, 25, has also been named in tributes after he was killed in the car crash in Surrey 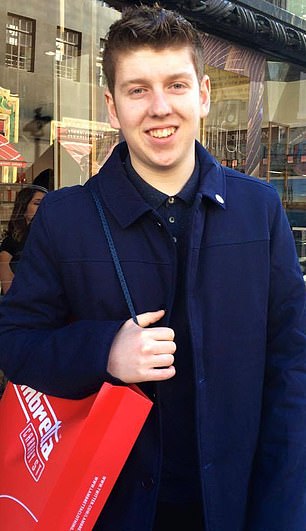 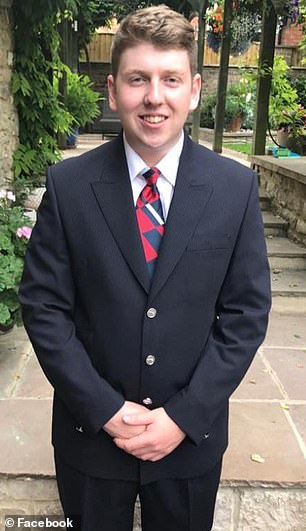 Tributes for Dominic Fell (above), 23, included 'keep flying high' after he was named as a victim

'Three years feels like a lifetime I have known you. Thank you for welcoming me into your family and treating me like I've always been part of it.

'I will never forget how much you cherished my boys and how amazing you were with them and the memories will stay close to my heart forever.'

Another friend, Hanushe Lala, added: 'I am truly lost for words; you were a kind, beautiful and intelligent person who only ever brightened up everyone's day

'You will always have a special place in my heart, forever and always. I hope you rest in eternal peace. All our thoughts and prayers are with your family and loved ones.'

The crash happened when their white Toyota Yaris they were travelling in collided with a white Mercedes HGV at a junction in Stanwell at 11.39pm.

Writing on Facebook about Mr Finnis, fellow cabin crew member Lizzie-Lil Loughrey, said: 'RIP Joe, literally in shock. I only saw you two weeks ago and was saying how happy I was for you and that it would be weird seeing you back (in) uniform. 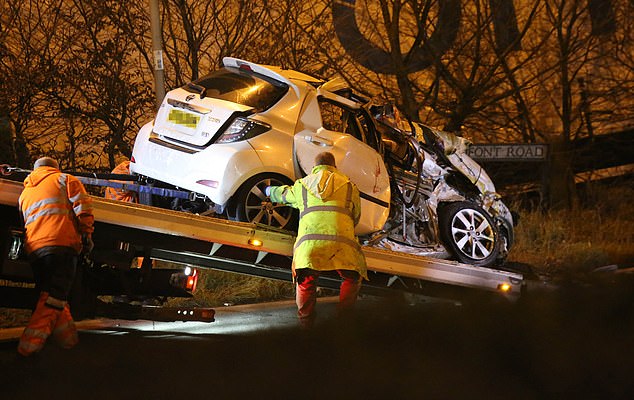 The crash happened when the white Toyota Yaris the cabin crew were travelling in collided with a white Mercedes HGV at a junction in Stanwell, Surrey, at 11.39pm on New Year's Eve 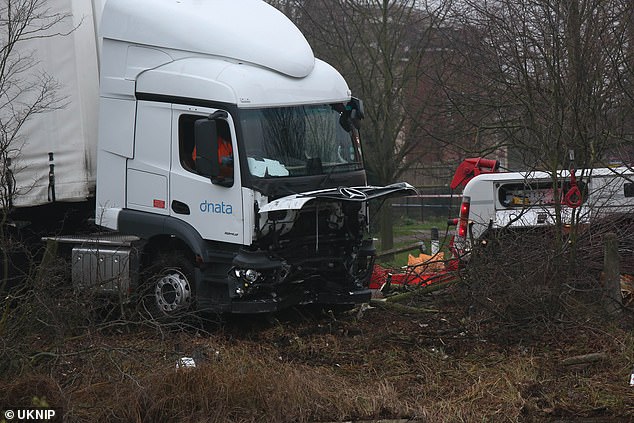 'Absolutely heartbroken. Thoughts are with your family and the families of the other crew involved'.

Another friend, Henry Ambrose, said: 'Joe Finnis, gutting news. Although we had only flown together a few times you most certainly had a big impact on the experience I had at BA. Rest in peace man.'

Paying tribute to both, Bailey Faulkner, said: 'It's a sad time when you get a message being told that two close mates from the skies have both passed away minutes before 2020.

'I couldn't thank you both for the endless trips together all across the world which each time was full of boozing and laughter, not forgetting the days spent sat in the pub! Gutted you've gone but you'll never be forgotten! Keep flying high.'

Mr Finnis, a former RAF Cadet from Southampton, had undergone pilot training alongside his cabin crew role at British Airways.

And Mr Fell, from London, who had been at BA for more than two years, appears to have had a passion for photography. 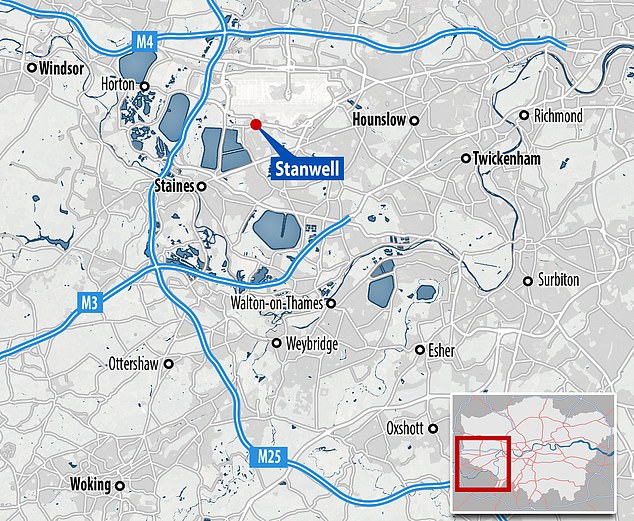 A map shows where the crash happened in Stanwell, near Heathrow, and just outside London

A friend of Mr Fell, who did not wish to be named, told MailOnline: 'Dom was one of a kind, a truly nice human being, one of the good guys. He loved his job at BA, he enjoyed every single second of it as he told my partner and I on numerous occasions.

'His family I have no doubt are at present in shock but they have a strong support until and in time they will get through this and remember the family member and friend fondly.

'Dom was indeed a keen photographer whose work was first class - and I hope in some way we can remember him through those photographs. RIP Dominic, you have done your family and friends proud.'

Mr Crook, a member of cabin crew at British Airways, set up the fundraising page for the families of those affected.

Writing on the page, he said: 'As you are now all probably aware, on New Year's Eve we lost three fellow Mixed Fleet Crew in a fatal car crash, and another is in hospital in a serious condition.

'I have set up this fund to raise money so that we as a fleet can send a nice flower arrangement to the three crew members funerals and hopefully make a nice donation to a charity of the families choosing. 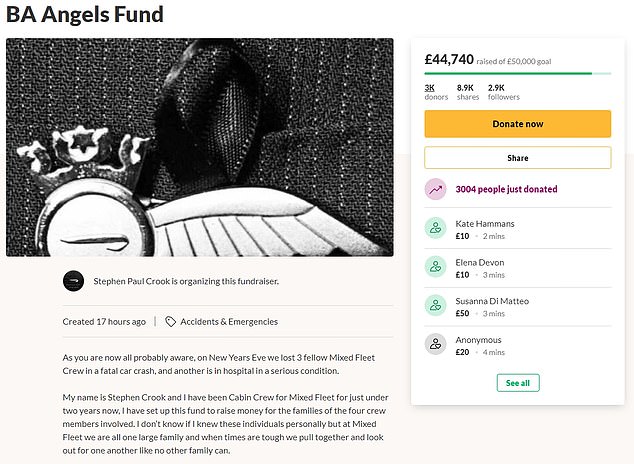 A fundraising page has been set up for the families of those affected, with £44,000 donated

'Also the crew member who is in hospital will need