Woman, 74, is crushed to death by a 3.30am subway train in Times Square after 'falling while walking between cars' A 74-year-old woman died at Times Square station Monday 3.30am It's reported she may have fallen while walking between subway train cars  The N train was pulling into 49th Street station when the incident occurred The woman from East Flatbush, Brooklyn is unidentified until family is notified

An elderly woman has died after being crushed by a New York subway train in the early hours of the morning.

The 74-year-old - whose identity had not been made public Monday evening  - was killed at the scene around Times Square, Manhattan.

The MTA's N train was pulling into 49th Street station when the elderly woman was fatally injured.

She died at the scene. 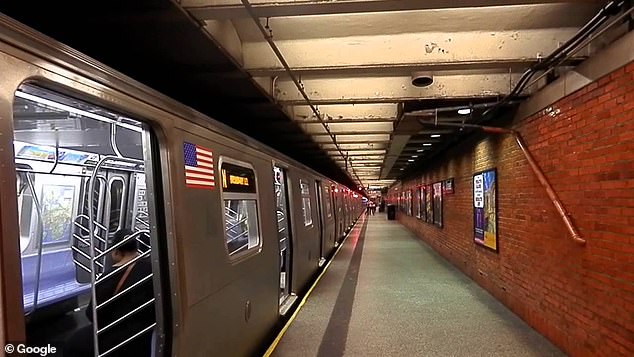 A 74-year-old woman died at Times Square station Monday 3.30am. It's reported she may have fallen while walking between subway train cars

Authorities say she may have been walking between cars when the incident occurred around 3.30am on Monday.

It's believed the victim was crushed after falling from the vehicle.

Police have not revealed the name of the woman who died, pending the notification of her next of kin.

However it has been made public that the victim resided in Flatbush, Brooklyn.

As a result of the incident Northbound N and Q trains were bypassing 49 St while emergency teams responded 'to someone who was struck by a train at that station', New York City Transit announced.

PREV 'I like to obey the law.' Trump walks back threat to order illegal attacks if ...
NEXT Hawaii crash update: Tour copter hit ridge, then fell