Stormzy turned up for an interview on BBC Breakfast today wearing a pair of slippers after he forgot to bring his trainers.

The grime star stayed in his slippers after a record signing last night at an HMV store in Bristol - and only realised he was still wearing them after getting into his car to go to the studios at MediaCityUK in Salford, Greater Manchester, today.

The rapper was complemented on his £90 Ugg Tasmans by BBC host Dan Walker, who began the chat by saying: 'Can I say, first up, those slippers are magnificent.'

Stormzy replied: 'I know, do you know what it is? I forgot, no, I actually forgot, I'm an idiot, I forgot.' Walker asked: 'What, forgot your shoes?' 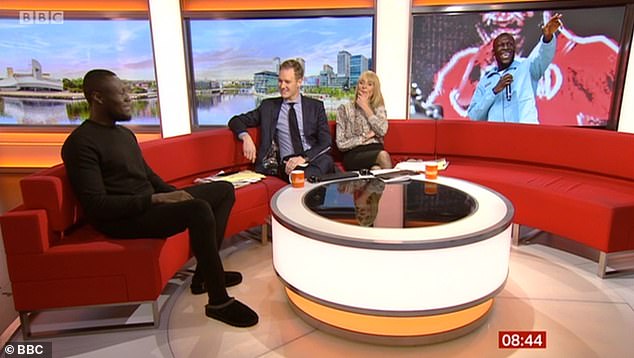 Stormzy spoke on BBC Breakfast in his slippers today, with Dan Walker and Louise Minchin 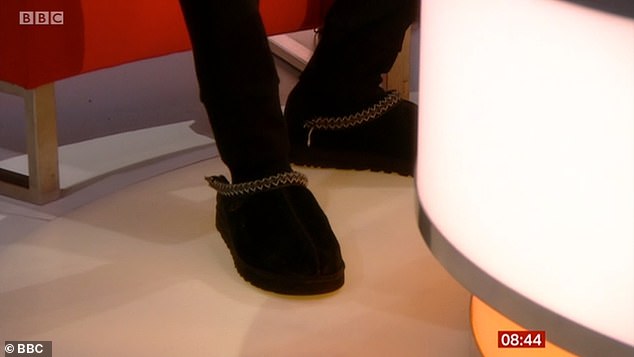 And Stormzy said: 'Yeah, which sounds mad. We've been doing signings - I did a signing in Bristol, we've got a signing tonight - but I just stay in my slippers, and then I came, I got in my car and was like, oh, I ain't got my trainers.'

Big for Your Boots singer Stormzy, who has another record signing at an HMV store in Cardiff tonight, later added in the interview that his hopes for 2020 were 'more music, touring, then I'm going to go to bed after'. 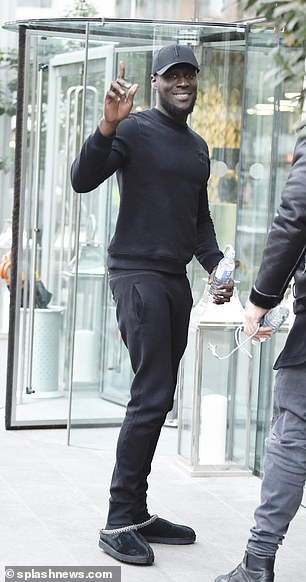 Stormzy waves to fans in his slippers outside BBC Breakfast studios at MediaCityUK in Salford, Greater Manchester, this morning

Walker then added: 'I love the fact that you've rocked them today.' Stormzy said: 'I know, it was an accident, and you know, the back bit's all… yeah.'

Following today's interview on BBC One, the rapper smiled as he posed for selfies with excited fans outside the studios - still wearing his slippers.

His choice of footwear caused much laughter on social media, with one viewer saying: If I was as famous or as rich as Stormzy, I'd just live in slippers and pyjamas and move around in a motorised bed and do all my press while eating toast and mainlining tea.'

Another said: 'Loving Stormzy forgetting to take off his slippers before heading to BBC Breakfast this morning. Should have gone the whole hog and kept his jammies on.'

And a third tweeted: 'Stormzy wearing his slippers on BBC Breakfast because he was half asleep when he got in the cab is the most relatable pop star moment of all time.'

In the wide-ranging interview, Stormzy was also asked about his outspoken views on politics, including his support for the Labour Party and its leader Jeremy Corbyn. 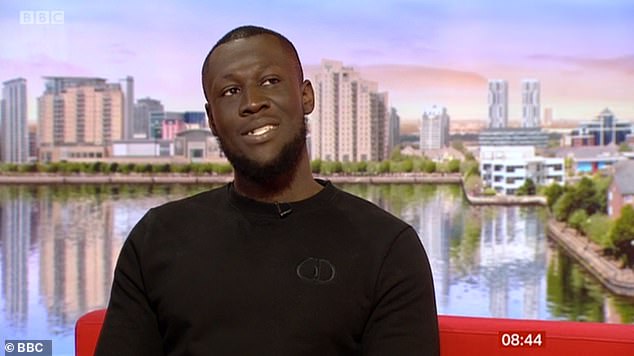 He said: 'I knew exactly as an artist with a platform, coming out and standing in favour and backing a politician, in my case I was backing Corbyn.

'Also, not in an ignorant way, but a lot of people were saying to me 'you have a platform, so you