A private Islamic secondary school in Birmingham is unlawfully segregating boys and girls and a teacher even told pupils that 'university is not for females', a stinging Ofsted report revealed today.

Inspectors who visited the fee-paying Redstone Educational Academy in November last year also found male students were given privileges and treated more favourably than their female counterparts girls when it came to sports and school trips.

The damning report with an 'inadequate' rating, which also highlighted several safety concerns, said the decision to teach boys and girls in separate classes came despite the school being told over a year ago that it is defying equality legislation.

And one group of pupils told inspectors a member of staff, who has since left, had told them: 'University is not for females.'

But headteacher Saadat Rasool has disputed Ofsted's findings and defended the segregation policy, which he said is in line with the Muslim faith of students' parents. 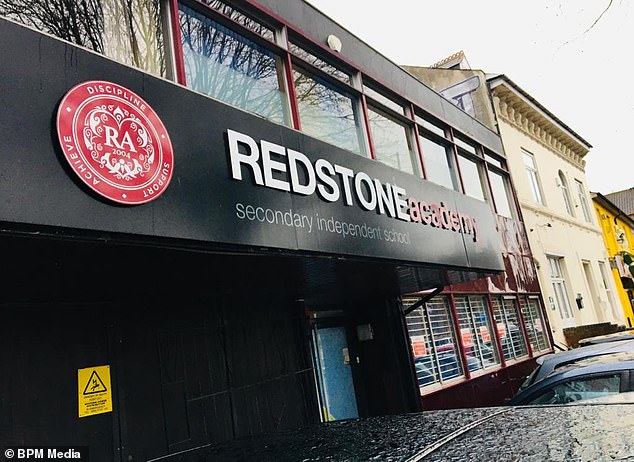 Redstone Educational Academy in Balsall Heath, Birmingham, (pictured) has been slammed by Ofsted and accused of breaking the law by segregating boys and girls

It came after Birmingham was engulfed by the so-called Trojan Horse scandal in around 2014, where parents at several city schools claimed that Muslim parents and governors were trying to impose

The school, in Balsall Heath, Birmingham, was also openly favouring boys by giving them first choice of work experience options and by barring girls from some sports, the report claimed.

Boys and girls take separate school trips, with the girls having to wear school uniform on those trips while the boys did not.

Headteacher, Saadat Rasool, disputed Ofsted's findings and defended the segregation practices, which he said were in line with the Muslim faith of parents.

Damning criticism of private Islamic school
Leaders are aware that segregating pupils by gender is unlawful and that they are in breach of the Equality Act 2010.  Some pupils are taught in a classroom on the second floor, and there is no means of escape in case of a fire. Leaders have been aware of this risk for some time but have not done anything about it. Some pupils with serious allergies do not have care plans or the medicine they need to keep them safe. Some pupils with serious medical issues do not have access to the medicine they would need in an emergency. Medical logs do not record the action taken following accidents, and the medical room is unlocked and unsupervised. Leaders do not make sure that there are appropriate risk assessments in place, or that the school’s policies are updated as regularly as they should be.=

He said the school had formally applied for permission to operate separate girls' and boys' schools on the site but its application was still under review by the Department for Education.

Mr Rasool said: 'We have operated for 12 years without issues, and we hope our application will be successful. But if it is not we will of course comply with the law.