Anything you can chew, I can chew better! Kurdish female officer tears into a snake and a rabbit with her teeth alongside male counterpart as part of graduation ceremony in Iraq Female members of the Kurdistan Democratic Party train and go to war alongside their male counterparts    They took part in an officers' graduation ceremony in Soran, an Iraqi-Kurdish town 60 miles northeast of Erbil  ISIS were 'terrified of the force because they thought being killed by a woman lost them a place in paradise'

Female Peshmerga soldiers have been photographed tearing into snakes and rabbits with their teeth as part of a graduation ceremony to make them officers of the formidable Kurdish fighting force.

Pictured today, the female members of the Kurdistan Democratic Party took part in their turning out among other male recruits near the Iraqi-Kurdish town of Soran, 60 miles northeast of the Kurds' capital, Erbil.

During the ceremony, the women showed their military might by rolling through sloppy mud, knocking down their male counterparts in combat and tearing into a live snake and rabbit with their teeth.

The Peshmerga, which is the armed forces of Iraqi-Kurdistan, first became a key player in the ground war against the Islamic State in August 2014 when the Sunni-extremist troops launched an unexpected attack on their region.

One of the female troops' most notable triumphs was when they held off an ISIS assault on the city of Kobane during a bloody four-month long battle, and reclaimed the strategically crucial Mosul Dam soon after it fell to the militants.

The Kurdish Peshmerga is famous for its use of female soldiers, all of whom battle alongside their male counterparts on the frontline.

A female Peshmerga officer told the MailOnline in 2014, as the war on ISIS was raging, that women were particularly terrifying to the extremists because they believe men dispatched by women won't go to Paradise. 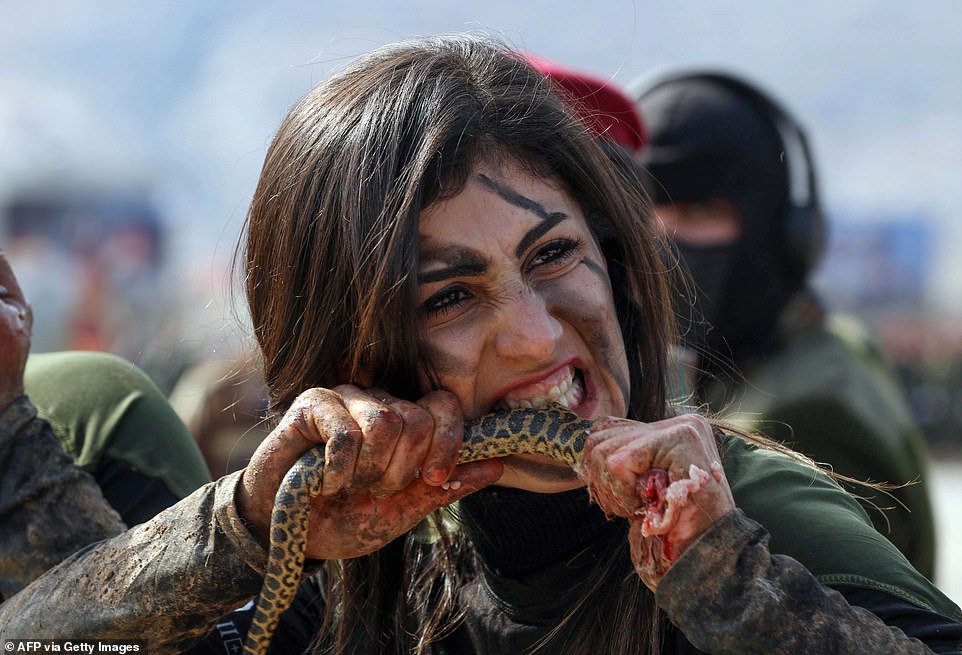 An Iraqi Kurdish Peshmerga female officer bites a snake while demonstrating skills during a graduation ceremony in the Kurdish town of Soran, about 100 kilometres northeast of the capital of Iraq's autonomous Kurdish region Arbil, on February 12, 2020