How a young woman kicked her heroin habit to start a degree and get her son out of foster care – only to be jailed again for a crime she’d already served time for Angela Williams was first jailed when she was 19 and again 10 years later  Ms Williams was jailed for breaking into a home in the hopes of finding drugs  She was shocked when she was arrested, she thought she was served her time Ms Williams had turned her life around, kicked her drug habit, was studying 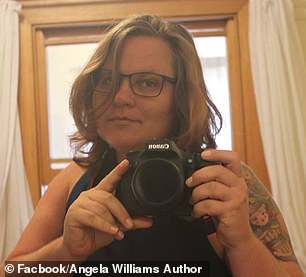 Williams has penned a book, called Snakes and Ladders, about her time behind bars in the hopes of shedding some light on the system

A young mother was sent to jail twice for the same crime, despite believing she had served her time and turned her life around.

Angela Williams, from Wollongong, south of Sydney, was 19 when she was caught breaking into a home with three men in the hopes of finding drugs. She was sentenced to 15 months' periodic detention in October 1996.

Williams was shocked when she was arrested again, 10 years later, for the same crime.

'I did rehabilitate, and they put me back in there anyway,' she told the ABC.

As a teenager, Williams spent five months doing short stints at the Emu Plains Correctional Centre, west of Sydney but stopped when she signed up for a 12-month rehab program.

Three months later she returned to complete her jail stint but claims she was told by a police officer that if she stuck with her rehab program, she can consider it time served.

Ten years rolled by and in that time Williams had turned her life around.

She had kicked her heroin addiction, she had started

'An outbreak in backpackers': NSW to search for undetected cases in Sydney's ... mogaznewsen