Photos of the moment cult mom Lori Vallow was taken into custody in her rented Hawaii apartment on Thursday, months after the disappearance of her children, have emerged.

In the images, Vallow is seen being frisked next to a cop car while her husband, Chad Daybell, watches on. She was wearing a black sweater, floral yoga pants and flip flops.

After being patted down, she was taken in a patrol car to Kauai Police HQ where she remains in a cell awaiting her first court appearance to determine if and when she will be extradited back to Idaho, where the charges were filed and where her two kids, JJ, seven, and Tylee, 17, were last seen alive.

Her newly unsealed arrest warrant reveals she told Melanie Gibbs, a religious enthusiast who has a podcast Lori appeared on, to lie about where the kids were. 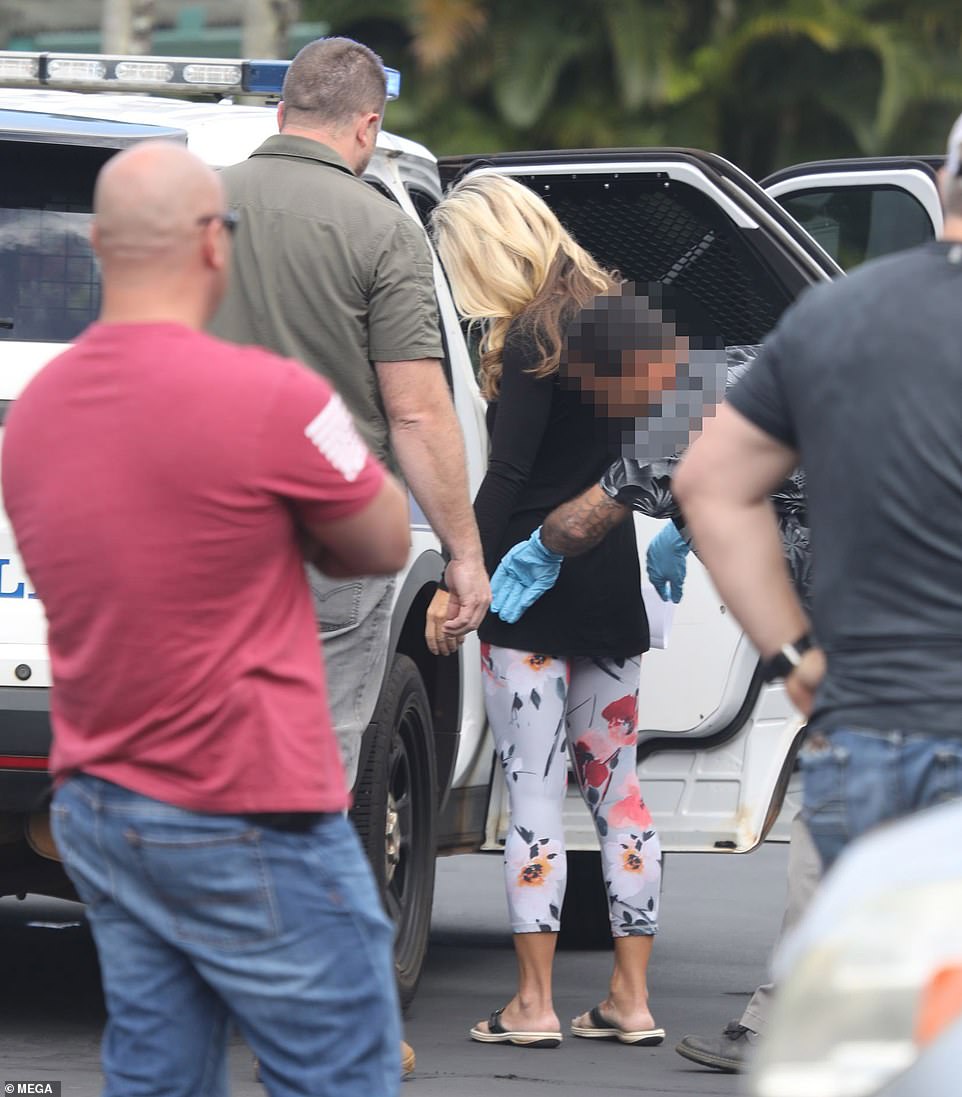 Lori Vallow is frisked next to a patrol car as she is arrested in Kauai, Hawaii, on Thursday on charges relating to the disappearance of her two children 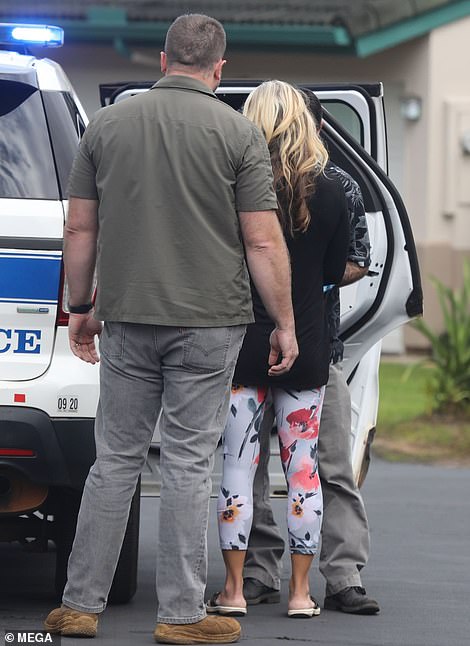 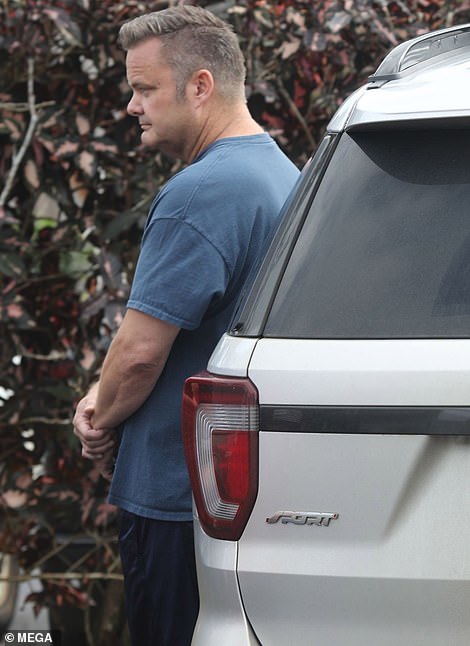 As officers prepared to take Vallow away in a patrol her, her Doomsday author husband Chad Daybell (right) watched helplessly 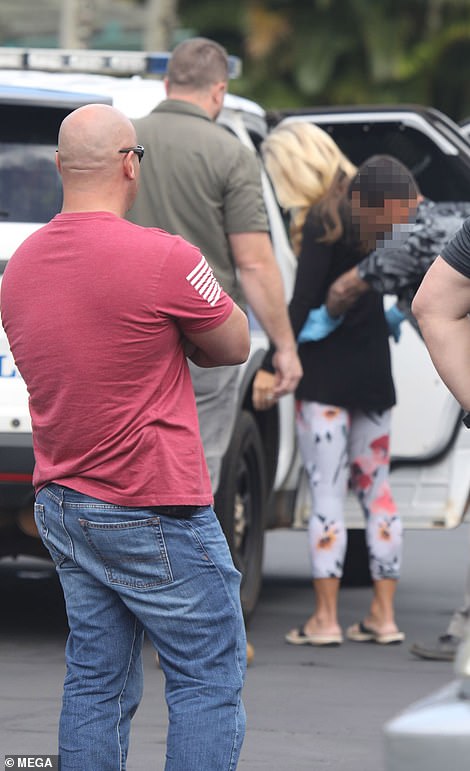 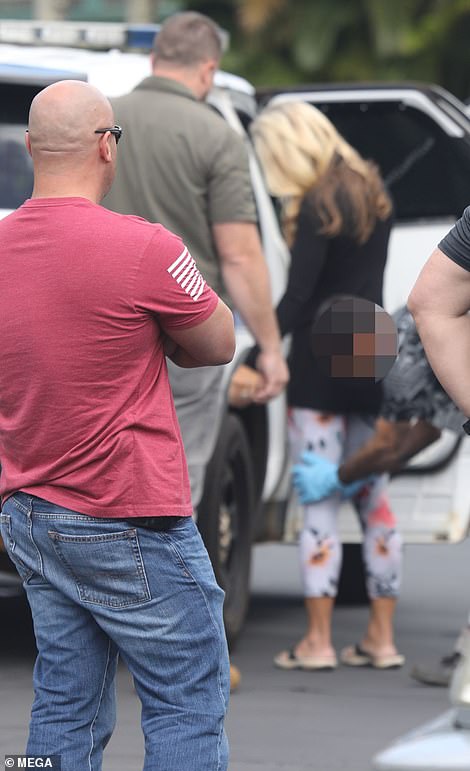 Lori being frisked as other officers watch on Thursday. Her arrest has been months in the making The police station in Kauai where Lori remains in custody. A hearing has not yet been set for her to go before the judge

Neither of the children has been seen since September and their extended family are gravely worried for them. 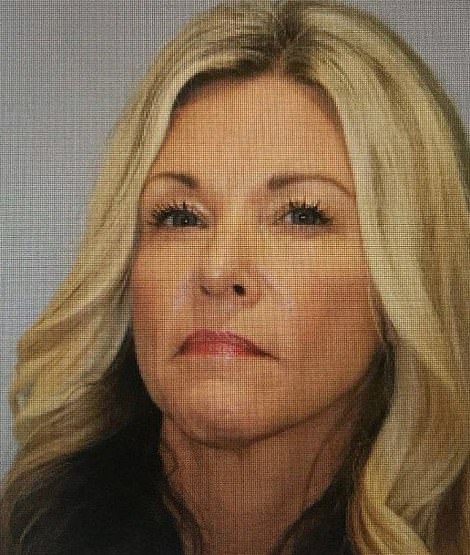 'Cult' mom Lori Vallow has been arrested by police in Hawaii during the investigation into her two missing children. She is pictured above in a new mugshot taken before she was jailed on a $5million

They have been frantically appealing to Lori to tell authorities where the kids are but she has refused, instead staying silent and enjoying a quiet life in Hawaii with her new husband, Doomsday author Daybell.

The pair are said to be obsessed with the end of the world and spirituality.

They got married in a beach ceremony in November, six weeks after the kids vanished.

The arrest warrant is for a failure to comply with a court order to produce JJ and Tylee last month in Idaho.

Lori has also been charged with desertion, nonsupport of dependent children, arrests and seizures – resisting or obstructing officers, criminal solicitation to commit a crime, and contempt of court – willful disobedience of court process or order.

Where the children are remains a mystery, but it puts Lori in custody for the first time since the saga began.

Along with JJ and Tylee's disappearance, she may have to answer questions about the suspicious deaths of her brother, Alex Cox, who died in December in mysterious circumstances, and that of her estranged husband Charles Vallow, who Alex shot dead in July. 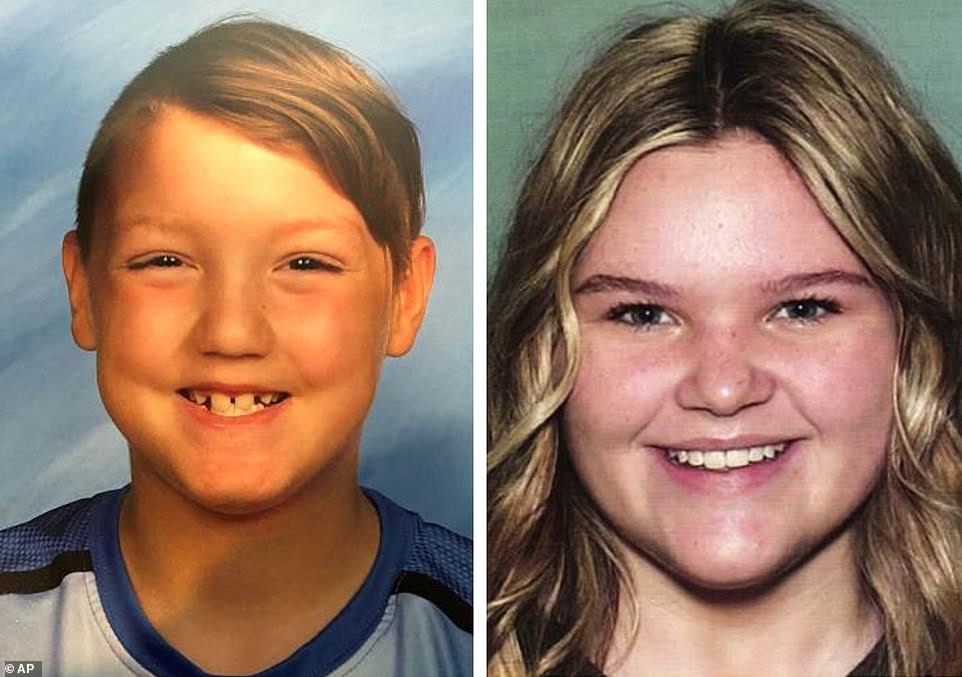 Lori failed to comply with a court order to produce her children before authorities on January 30 in Madison County. Joshua 'JJ' Vallow, seven, and Tylee Ryan, 17, were last seen in Idaho in September in Rexburg, Idaho and authorities are still searching for them 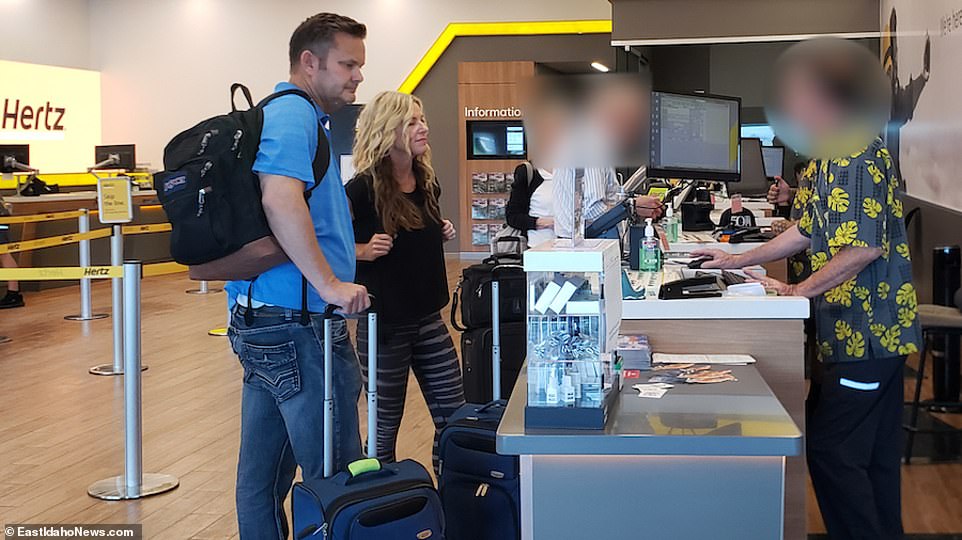 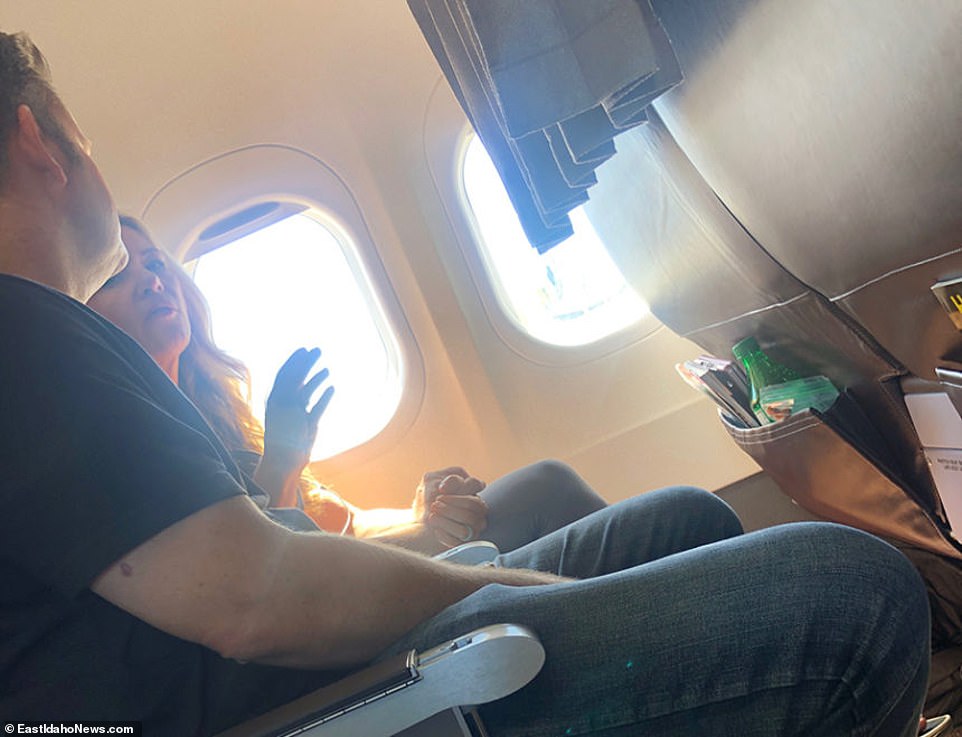 The couple left the island on Sunday and traveled to Maui. The couple are seen sitting on the plane after boarding on Tuesday to head back to Kauai 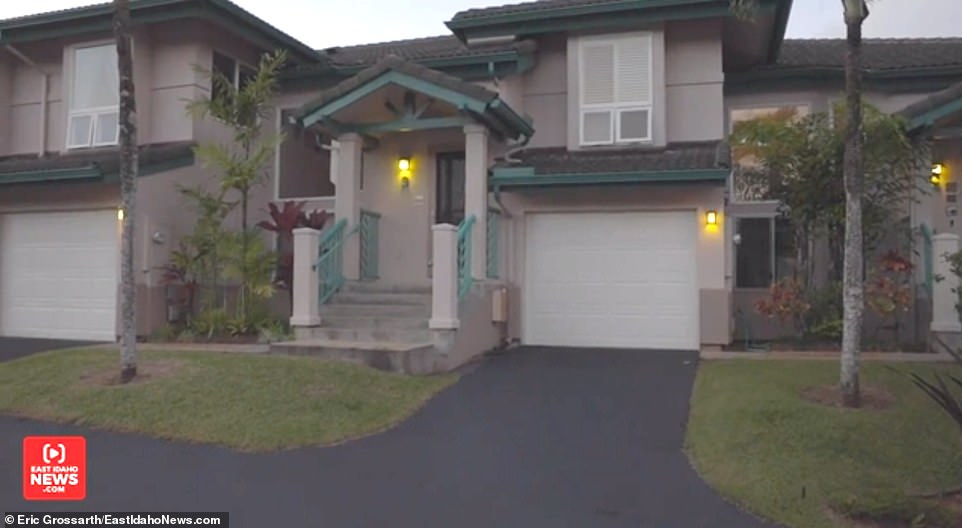 The couple have reportedly been holed up in this three-bedroom condo at the Kaiulani of Princeville Townhomes in Princeville, Hawaii

The maximum sentence on each count of desertion of a child in Idaho is 14 years in prison.

In a statement, Kauai Chief of Police Todd G. Raybuck said: 'First of all, we wish to thank the public for the massive outpouring of concern regarding this case.'

'We also want to thank everyone for their patience while investigators worked diligently to comprehensively gather everything they needed in order to obtain this arrest warrant.'

JJ's aunt, Annie Cushing, said she was relieved by the arrests and hoped Lori would be held accountable for whatever has happened to the children.

‘I wanna know where JJ and Tylee are.

'I feel confident these charges could stick and she could potentially go away for a long time,' she told

The kids are still missing. pic.twitter.com/HcKK1MFWem

It comes after weeks of pressure from the children's other relatives to arrest Lori or force her to tell them where the children are.

A hearing date, where Lori will be given the opportunity to waive or fight extradition to Idado, is yet to be determined.

Shortly after Lori was arrested, the grandparents of JJ spoke to KHON 2.

Larry and Kay Woodcock both said that they are 'very, very happy' that Lori has been arrested.

Kay said after receiving the news, their family was 'hoping and hollering so we are one big happy family'.

She revealed that they knew Lori's arrest 'was coming,' they 'just didn’t know when'.

'I know they [police] have put so much work into this.

'They’ve worked through the holidays and I know the public doesn’t think they have but we have been working with them and we know what was going on, well what they could tell us,' Kay said.

'But we did not know the arrest was coming today. I felt like it was going to come in the next week,' Larry added. 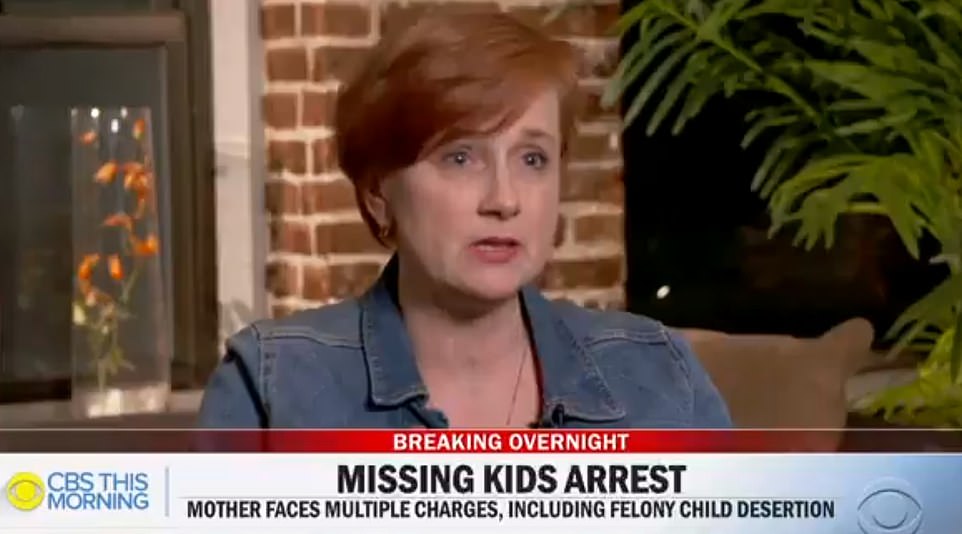 Annie Cushing, JJ's aunt, said on Friday she hoped the arrest leads to finding him and Tylee 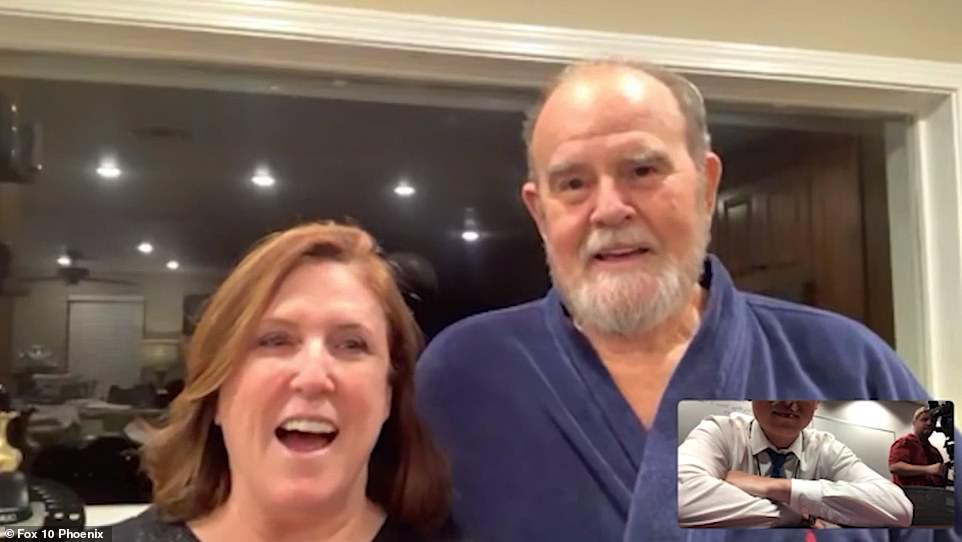 Shortly after Lori was arrested, Larry and Kay Woodcock, the grandparents of JJ (pictured together) spoke to KHON 2 and said that they are 'very, very happy' that Lori has been taken into custody

They were then asked about what their upcoming plans are.

'We’ll never give up trying to find JJ and Tylee. That won’t end,' Larry said, with Kay adding that the 'next chapter in our lives will be looking at the law surrounding missing children'.

When asked by a reporter from what they would say to Lori right now, Kay responded: 'Hey honey, you better start talking now and maybe you can save a year or two off your sentence you’re about to have when you go to court.'

It wasn't until the end of the five-minute clip that the couple made a plea for Lori to tell them where JJ and Tylee are.

'You’ve had this long enough let’s end this and tell us where they are,' Kay added.

Lori's arrest comes just two days after she and her husband Chad were seen returning to the island of Kauai on Tuesday after their trip to Maui.

The couple - who were married on November 5 - fled to Hawaii in mid-December after leaving Idaho when police started to question them about the whereabouts of JJ and Tylee.

The search for JJ and Tylee was launched in late November after Rexburg police conducted a welfare check ordered by concerned relatives who said they hadn't spoken to JJ, who is autistic, in months.

Both children were last seen in September, but were never reported missing by their mother or stepfather.

When officers first went to Lori's home in Idaho on November 26, she told them that JJ was visiting relatives in Arizona - which investigators now say was a lie. 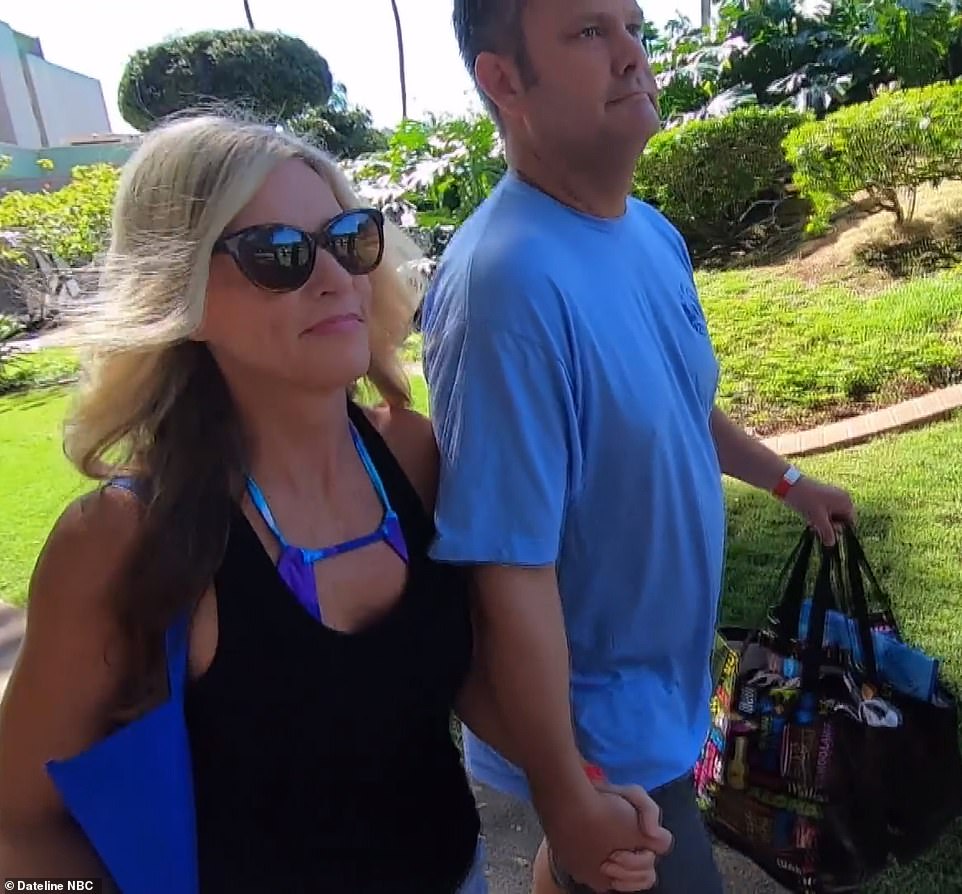 Lori and Chad have been living in Hawaii since mid-December after they fled their home in Rexburg, Idaho, when police began questioning them about the whereabouts of her children, JJ and Tylee 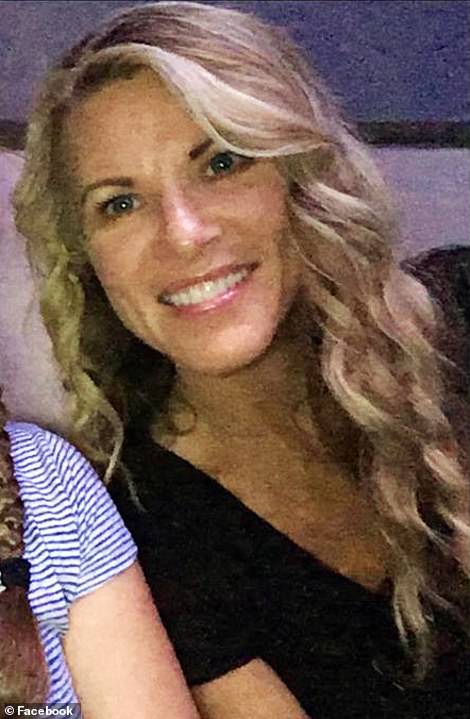 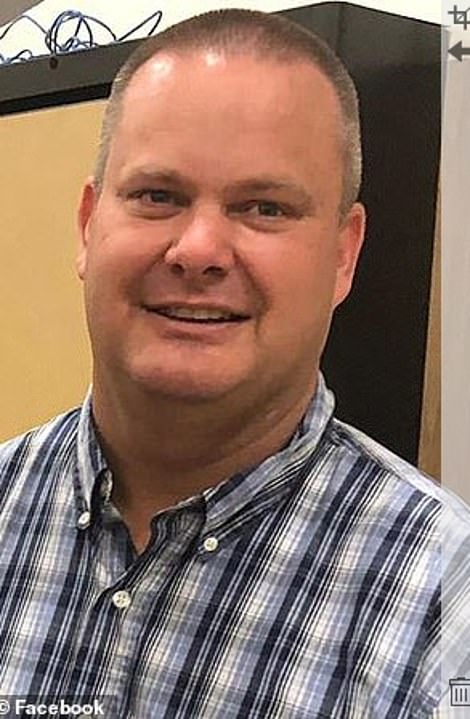 Lori and Chad became the target of a national media firestorm with the revelations that police are also investigating the mysterious deaths of both of their previous spouses and Lori's brother, as well as family members' claims that they are members of a doomsday cult 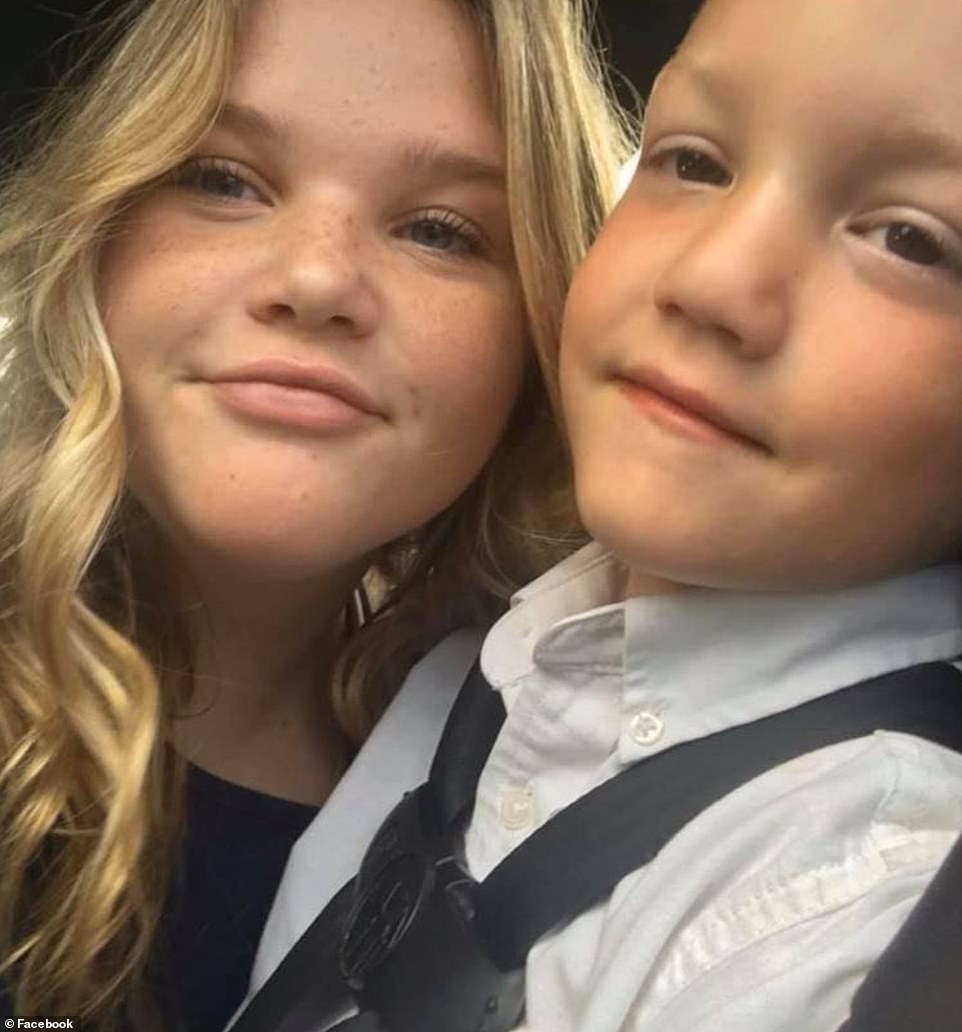 Officers returned the following day and found that Lori and Chad had fled from the home.

Timeline of JJ and Tylee's disappearance

September 23: The last time JJ was seen at his school in Idaho

October 25: A friend of Tylee receives a text from her phone

November 26: Out-of-state relatives ask Idaho police to perform a welfare check on JJ. Lori and Chad claim he is in Arizona with relatives. Police also learn Tylee has not been seen since September, either

December 11: Tammy Daybell's body is exhumed from the Utah cemetery

December 21: Police issue a press release about JJ and Tylee, revealing they believe their disappearance is linked to Tammy's death

December 24: Lori and Chad issue a statement through an attorney saying they love their son and daughter and look forward to addressing 'allegations once they have moved beyond speculation and rumor'

December 30: Police accuse Lori and Chad of lying to investigators and say they believe the couple know where the kids are or what happened to them

January 26: Lori and Chad are seen for the first time in months as police serve two search warrants in Kaua'i

On Tuesday, photos of the couple on Tuesday showed them standing at a Hertz counter at the Kahului Airport around 2pm.

They were then seen sitting in their seats as the plane prepared to takeoff.

Passengers and airport employees told EastIdahoNews.com that the couple remained quiet and kept to themselves.

According to the news site, a police officer also came to the gate to verify that the couple were on the flight.

Lori and Chad became the target of a national media firestorm with the revelations that police are also investigating the mysterious deaths of both of their previous spouses and Lori's brother, as well as family members' claims that they are members of a dangerous doomsday cult.

A close friend of Lori's recently revealed that she has been trying to stay out of the public eye as she waits for the 'media hype' to die down.

When the search for the children started in December, an attorney for Lori and Chad issued a statement on their behalf in December, saying they love their son and daughter and look forward to addressing 'allegations once they have moved beyond speculation and rumor'.

Who makes the cut in the list of the best 20 players Wayne Carey has seen? mogaznewsen

Who will take the lead in #raceacrosstheworld?