More than 90 per cent say taxpayers should not have to pay Prince Harry and Meghan Markle's £20m security bill, Good Morning Britain poll finds Good Morning Britain conducted a poll for followers of the show on Twitter Since it surfaced yesterday, 90.6 per cent said taxpayers shouldn't fun security On the show today, Diana's ex-protection officer suggested Queen pay the bill  Ken Wharfe warned that farming it out to the private sector would be a 'disaster'

More than nine out of 10 Good Morning Britain viewers say that taxpayers should not have to pay Prince Harry and Meghan Markle's £20million security bill.

The show’s Twitter poll garnered from than 14,000 responses to the question: ‘Should UK taxpayers foot the bill for Harry, Meghan and Archie’s protection?’

A massive 90.6 per cent responded 'no', leaving just 9.4 per cent answering 'yes' since the poll surfaced yesterday.

Piers Morgan and Susanna Reid revealed the results on this morning's programme as they discussed the row over who should fund the Sussexes since they stepped down as senior Royals and the duties the roles entail. 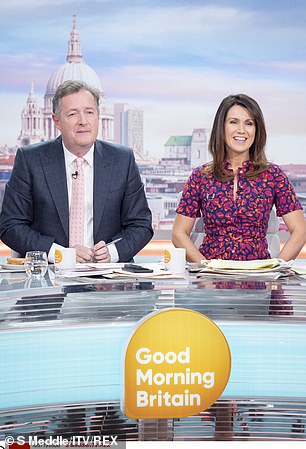 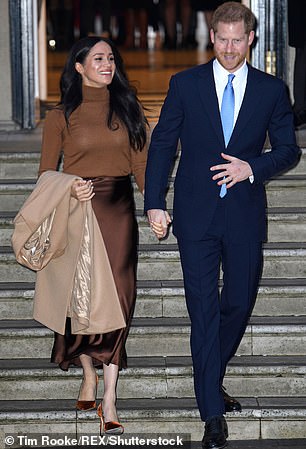 Piers Morgan and Susanna Reid (pictured, left, on today's Good Morning Britain) revealed that the majority of poll respondents don't want the taxpayer to pick up the bill for Harry and Meghan (right, at Canada House in central London in January 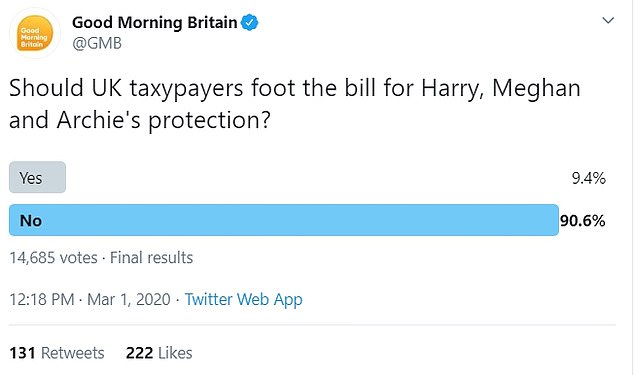 Princess Diana's former protection officer Ken Wharfe suggested that the Queen should pay the security bill for Prince Harry and Meghan Markle because there is a 'real risk' of someone trying to kidnap Archie.

Mr Wharfe said that the biggest threat facing the Duke and Duchess of Sussex is that someone may snatch their son.

‘Archie is probably the biggest threat to the family, more than the parents, there’s a real risk of a