Lives may have to be put on hold for up to three months to fight the deadly coronavirus, Boris Johnson said yesterday.

Setting out a 'battle plan' for tackling a potential epidemic, he warned the nation of the scale of the challenge posed by an illness that may afflict millions.

The sobering strategy said Britons could be asked to suspend their social lives – 'avoiding contact outside work and school' – if the virus took hold.

Sources said dramatically cutting back on activities such as eating out, going to the pub, shopping and shows could significantly slow the spread of the contagion.

Other contingency measures were set out to allow key public services, such as the NHS and the police, to continue functioning.

The plan said officers could be told to suspend investigations and focus on serious crime, the Army could be put on standby and foreign visitors showing symptoms could be required to have a coronavirus test before being allowed into the country. 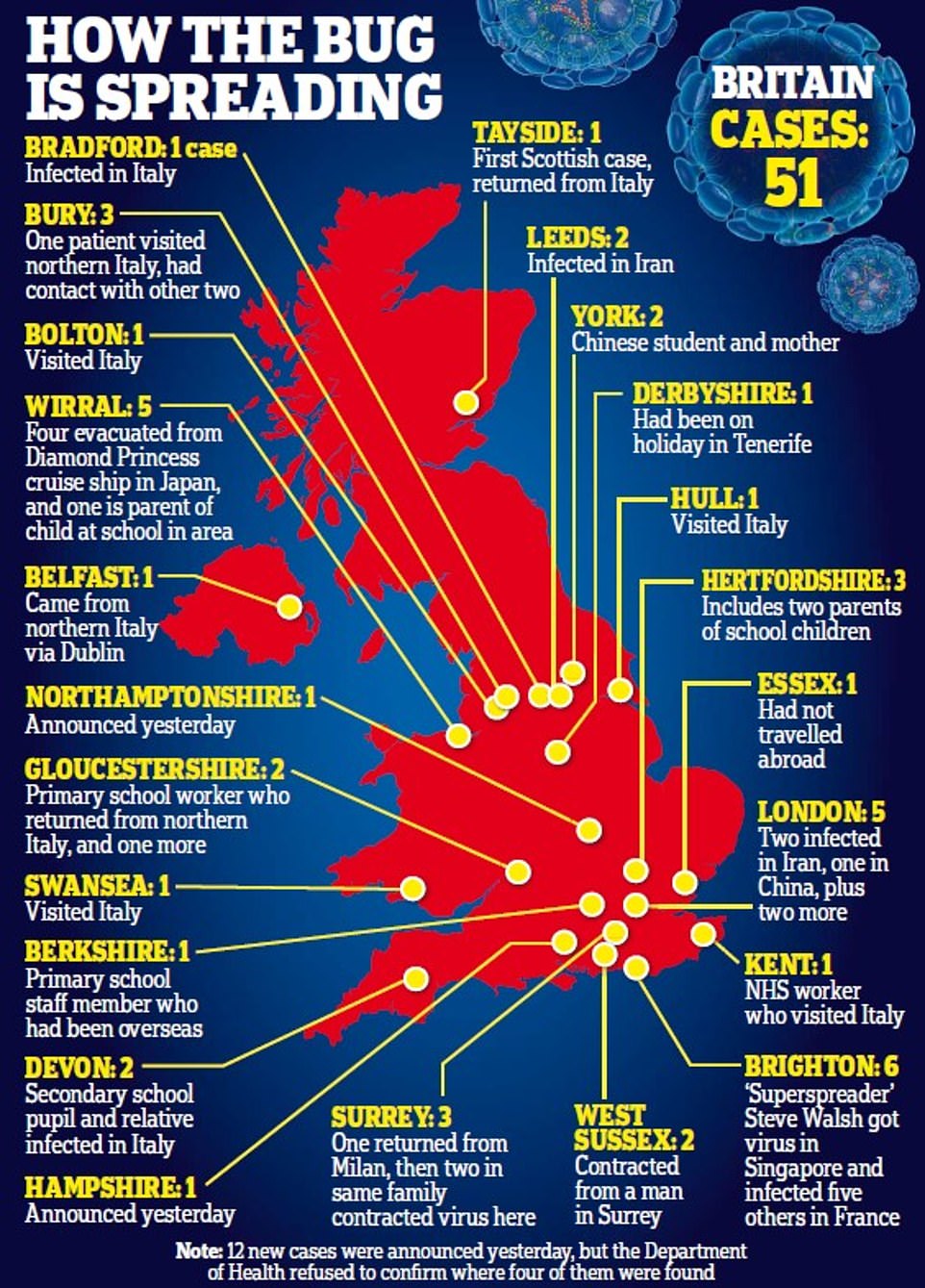 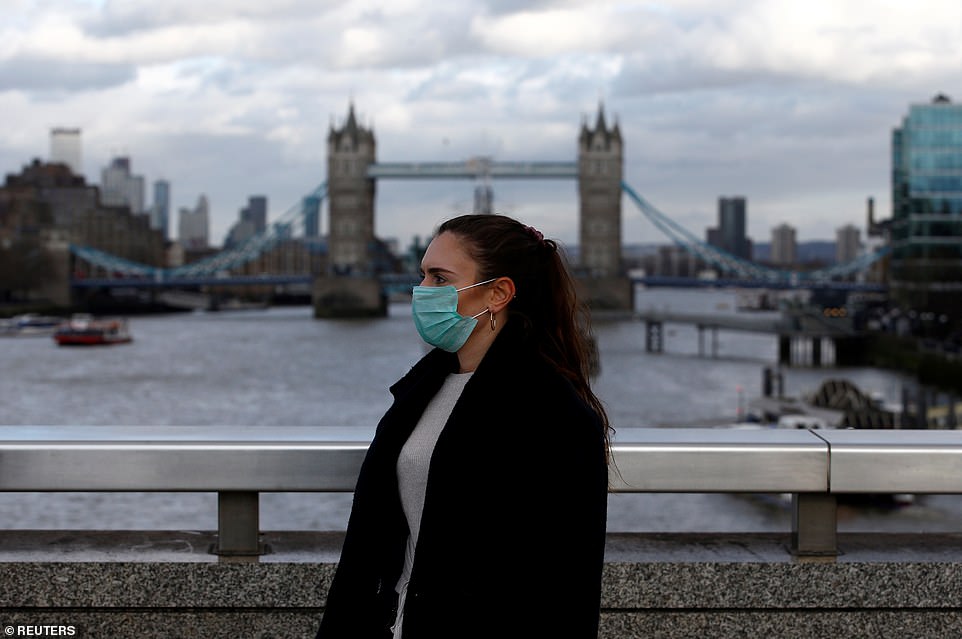 A member of staff at accountancy firm Deloitte (London office picture) tested positive for the virus after returning from Asia, MailOnline can reveal 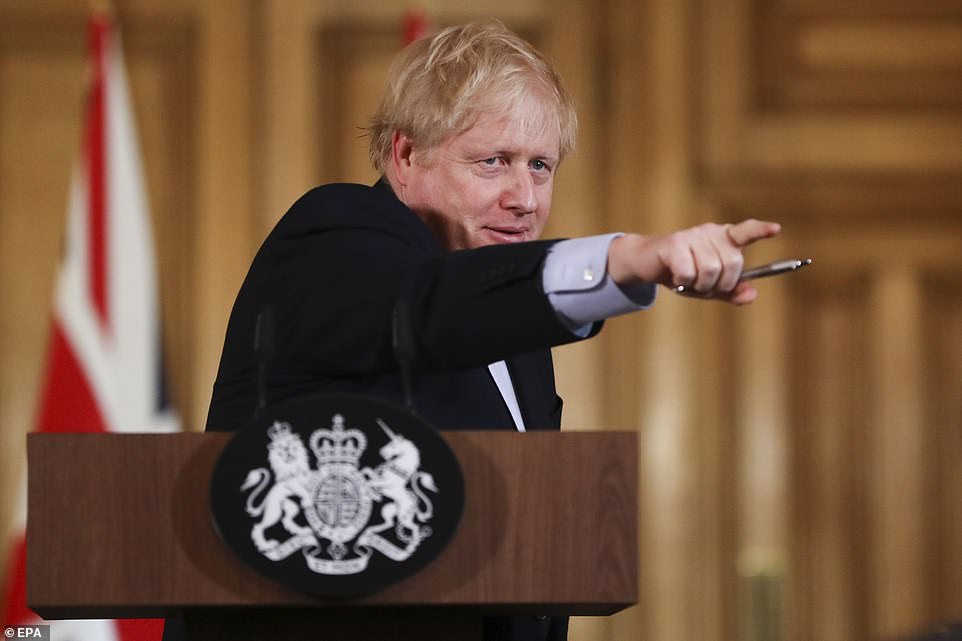 Boris Johnson at a Downing Street press conference yesterday, where he warned the nation of the scale of the challenge posed by an illness that may afflict millions 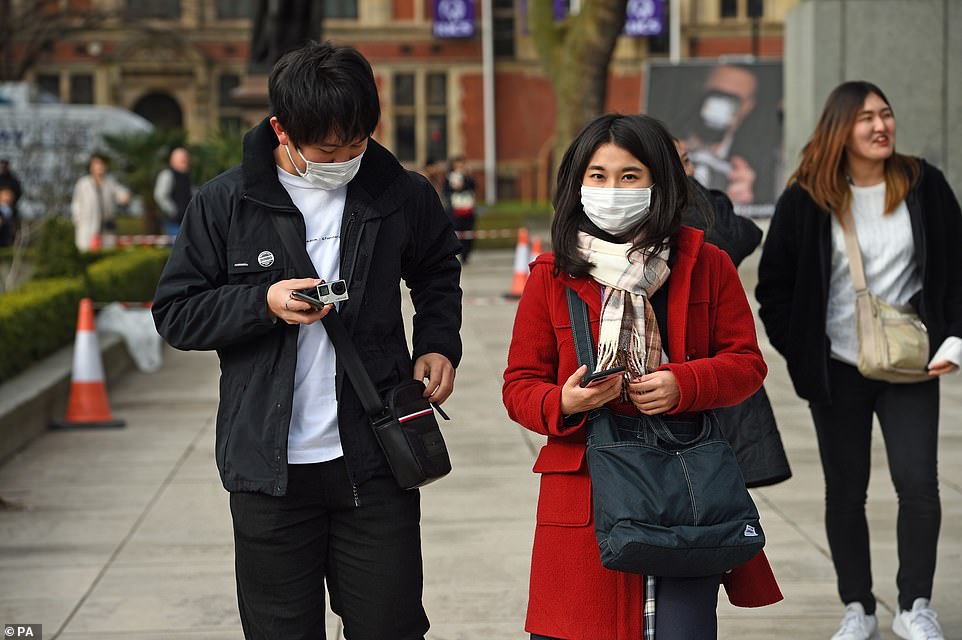 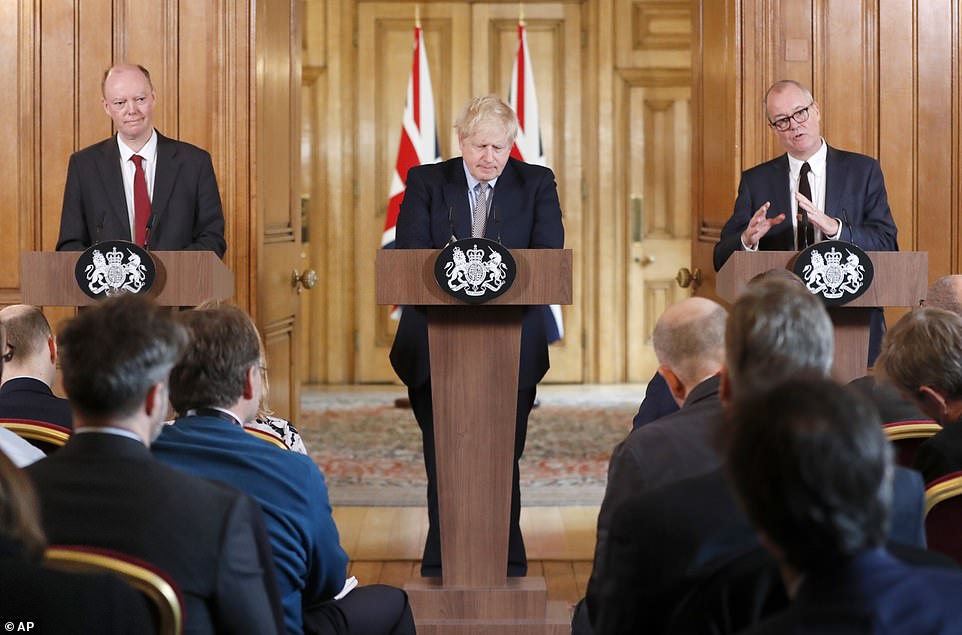 Chief Medical Officer Chris Whitty (left, alongside the PM and Chief Scientific Adviser Patrick Vallance) yesterday said he expected the spread to be 'probably a lot lower' than the worst-case scenario in which eight in ten could get it

Those who no longer need intensive medical treatment will be shifted from hospital wards to make room for patients with the virus under the Government's 'action plan' to deal with the outbreak.

Mostly elderly and frail, those who need help with everyday living rather than treatment will be moved back to their homes and given care there, it said.

However, this will increase pressure on the social care system, which is expected to come under strain if coronavirus begins to affect large numbers of people.

Health Secretary Matt Hancock said the threat of illness among those running care homes and providing care at home was 'a potentially big challenge'.

He said there would be a call for volunteers and a programme to bring back qualified social care staff who have left the industry, in the same way that retired doctors will be recalled to the NHS.

The plan said a fifth of the workforce – more than six million staff – could be off sick at the peak of the outbreak, which ministers hope to delay until late in the spring.

It emerged last night that the NHS had declared a 'Level Four' incident, the highest level of alert, as officials brace for a surge in coronavirus cases in the coming weeks.

Hospitals have been advised to postpone treatment where possible and treat patients at home, or in the community to ease pressure on beds.

At a press conference in No 10 yesterday, the Prime Minister said 'all reasonable and necessary steps' were being taken. He stressed that for the overwhelming majority the virus would produce only a mild disease.

But there are fears for the over-80s, who are thought to be especially susceptible. In a worst-case scenario, official projections point to as many as half a million deaths, although experts insisted early evidence from China suggested the final figure would be only a fraction of this.

Meanwhile a member of staff at accountancy firm Deloitte tested positive for the virus after returning from Asia.

The Big Four company's London office on New Street Square, Holborn, is undergoing deep cleaning for fear of contamination and the patient is now in hospital.

MailOnline understands that while part of the office space is temporarily closed, staff will be allowed to work from home if they wish.

A Deloitte spokesperson said: 'One of the floors in our offices has recently been impacted, with a member of staff being confirmed with Covid-19 after returning from a personal trip to Asia. The member of staff is now in hospital and receiving good care.'

The new cases included two in Bury and another in Bolton, as well as others in London and Hampshire;A major advertising campaign will urge Britons to wash their hands for 20 seconds throughout the day;The Queen wore long gloves at an investiture for what was believed to be the first time in decades;The death rate rose to 3.4 per cent from 2 per cent – possibly because the number of mild cases is being under-reported;Sick pay and benefit rules could be overhauled;A Wirral secondary school closed for a deep clean after a parent became infected;The US Federal Reserve announced a surprise cut in interest rates, with the Bank of England expected to follow;Shoppers ignored 'Don't panic' warnings and cleared shelves of essentials;In Italy, the death toll soared to 79 and Iran temporarily freed 54,000 inmates to combat the spread of the virus.

The 12-week plan will come into force should the virus defeat efforts to contain it.

Officials believe that cutting social activities by up to three quarters could hugely restrict its spread. Mass events, such as concerts, sports matches or even the May local elections or VE Day commemorations, could be cancelled. 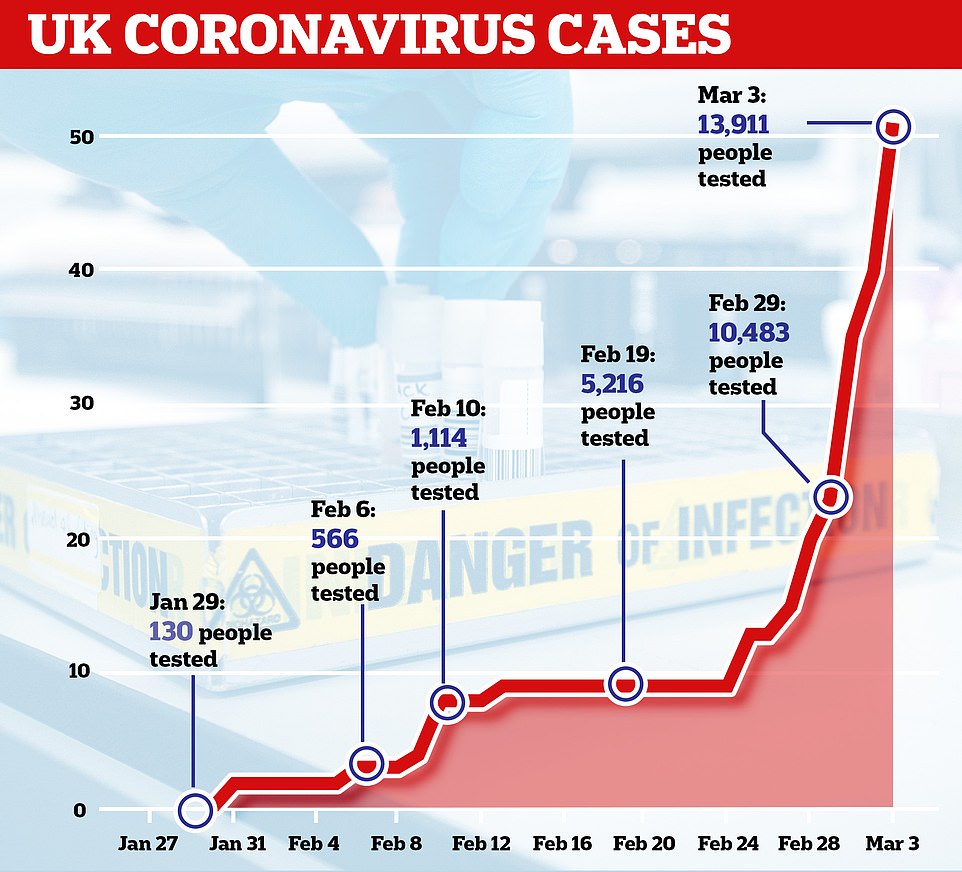 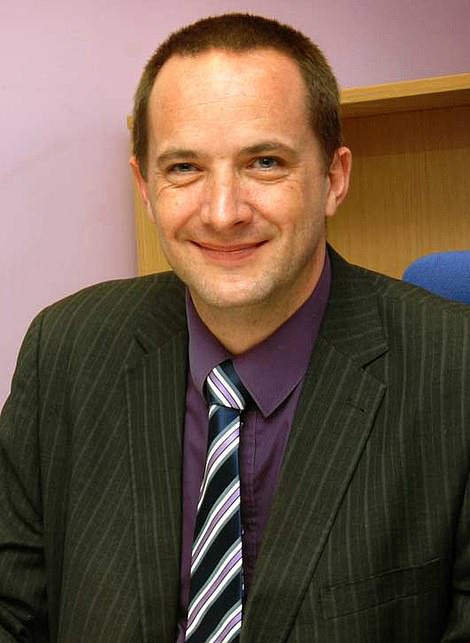 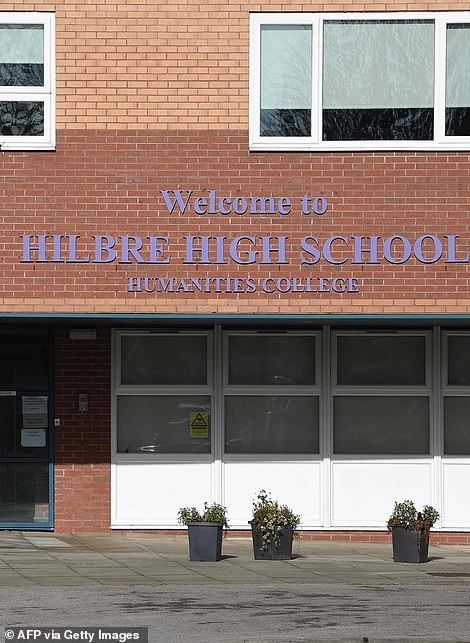 Mark Bellamy (left), headteacher at Hilbre High on the Wirral, Merseyside, (right) ignored Government advice and closed its doors for a deep clean after a parent was revealed to be among the 12 new