Parts of Australia will shiver through the coldest-ever start to May with temperatures below zero as an icy front originating from Antarctica sweeps the country.

People in New South Wales, Victoria, Tasmania, ACT, South Australia and even Queensland woke up to chilly temperatures on Friday morning - and it's set to get even colder over the next week.

'At the moment, we have a very cold outbreak across the south east from well south of the country from the Antarctic,' the Bureau of Meteorology's Dean Narramore said.

'It's one of those cases where all of the ingredients are coming together for a very cold outbreak.

'Northern Queensland and the Top End are still hot but they will be 2-6C below average over the coming days as this front moves further up.'

Victorians were the hardest hit as parts of the state experienced the coldest start to May ever recorded with the mercury dropping to -4C in some parts. 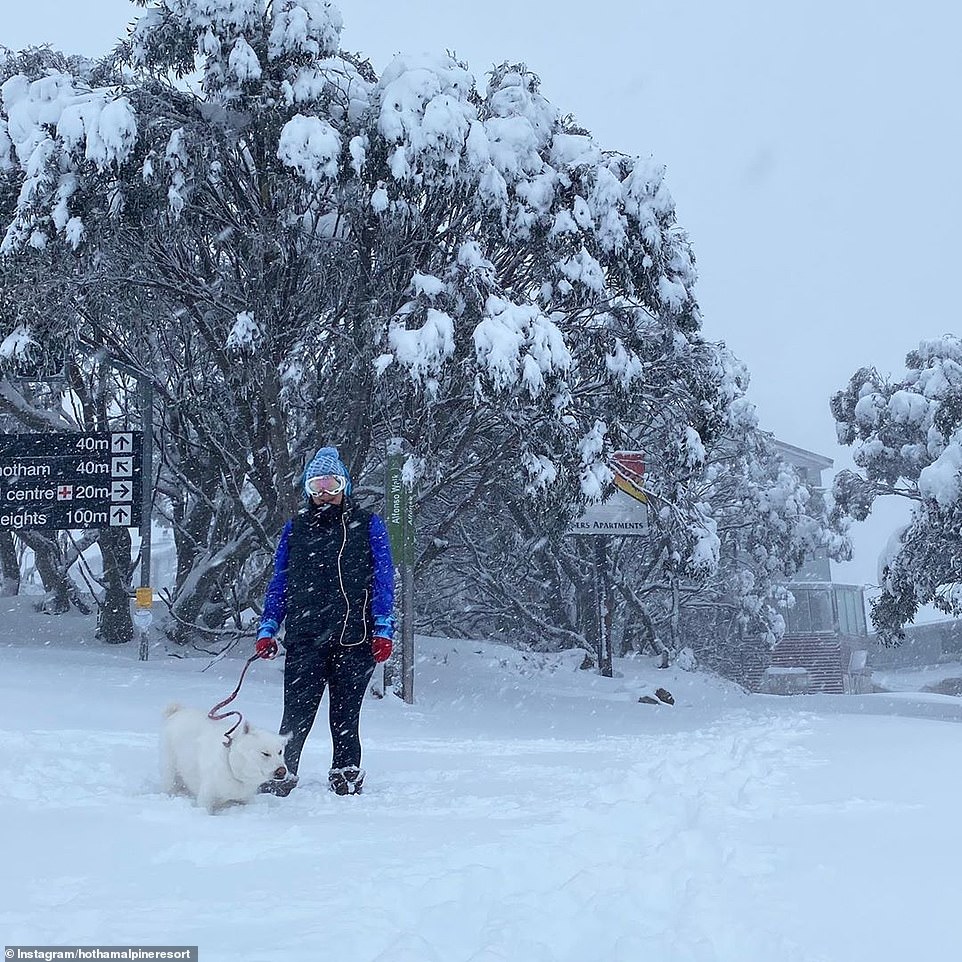 A woman takes her dog for a walk in Mount Hotham, which is currently experiencing blizzards and temperatures as low as -4C. Parts of Australia are shivering through the coldest-ever start to May in recorded history

Ski destination Mount Hotham, in Victoria's North East, is experiencing blizzards and took the crown for the coldest temperature at -4C and an even lower 'feels like' temperature of just -6.5C.

Blizzard conditions are expected across all of the state’s Alpine region, bringing up to 50cm of snow by the weekend.

Melbourne is set to experience its coldest ever start to May if the temperature does not exceed 12.1C. It is currently 12C but 'feels like' just 7C due to chill and rainfall.

The Victorian capital will continue to experience cold weather with 13C on Saturday and 14C on Sunday with more rainfall expected.

'Some of the temperatures are 4C to 10C below the May average. It's more typical of July in the middle of winter rather than May,' Mr Narramore said.

Meanwhile, Sydney shivered through its coldest start to May in a decade on Friday with lows of 8C and a maximum temperature of 17C.

The NSW capital will warm up over the weekend with a maximum of 19C on Saturday and 20C on Sunday - although both mornings will be chilly at 11C and a 'feels like' temperature 2-3C lower.

Thredbo gave Mount Hotham a run for its money with a minimum of -4C and a maximum of -3C with up to 12cm of snow expected. 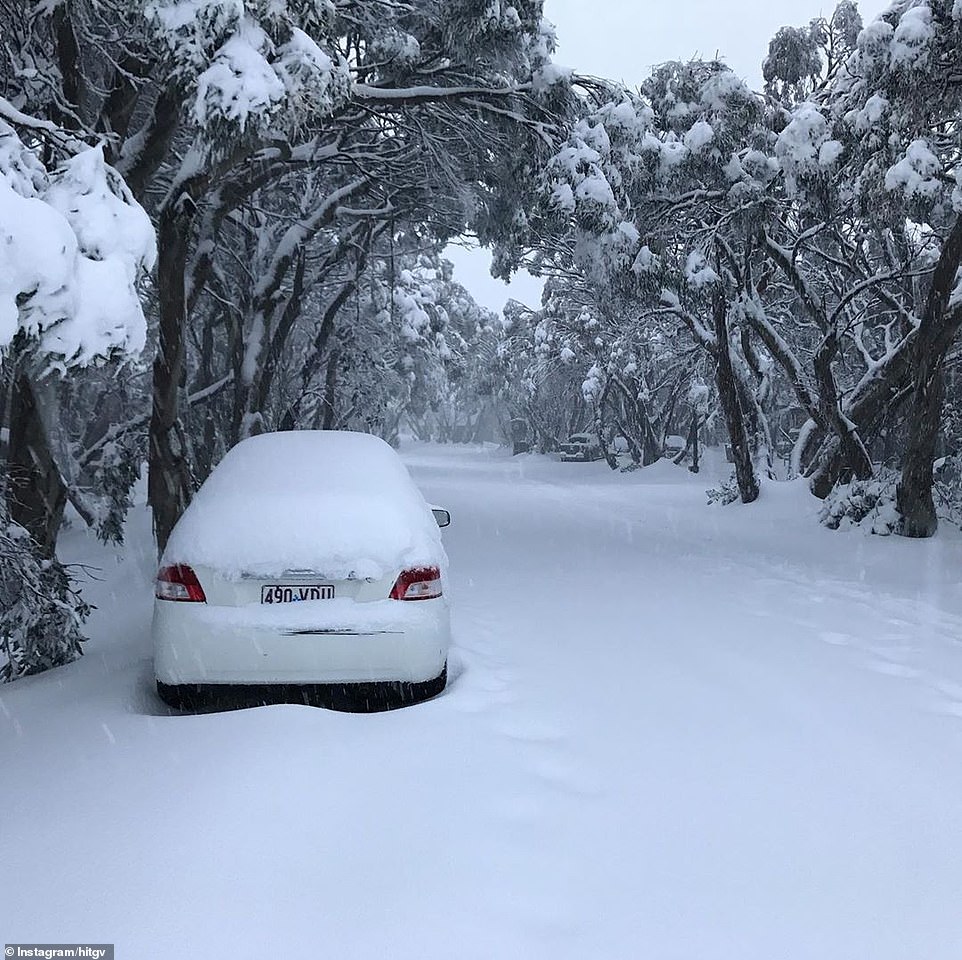 Snow blankets a road in Mount Buller in Victoria with footprints seen on the path. Blizzard conditions are expected across all of the state’s Alpine region, bringing up to 50cm of snow by the weekend 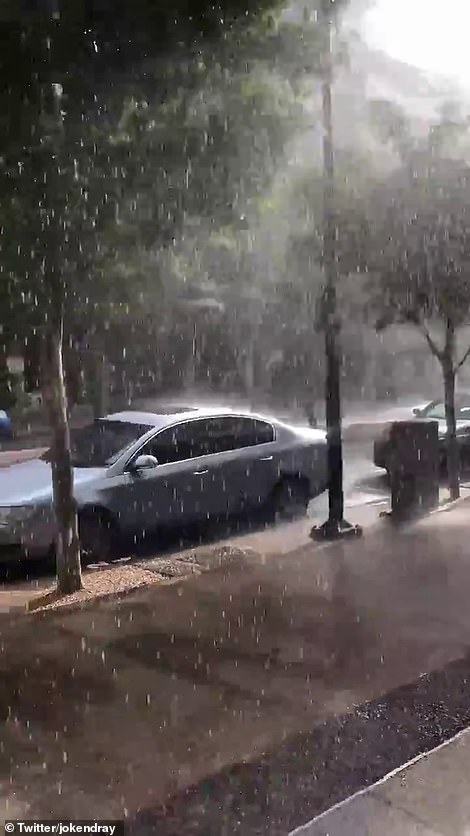 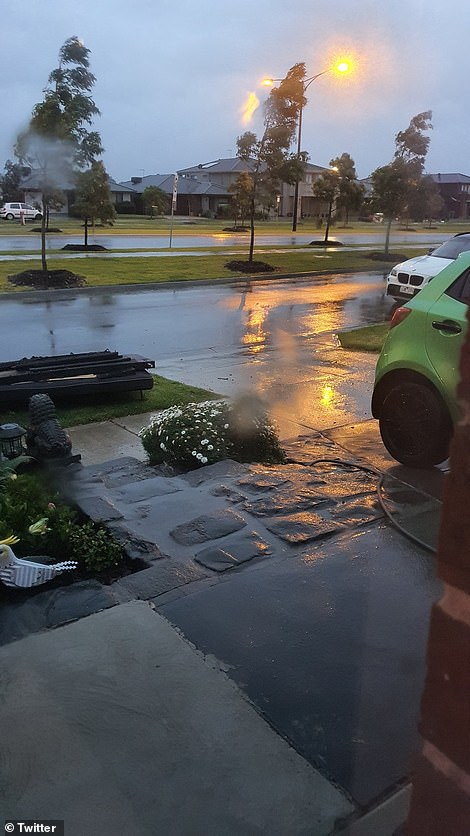 Melbourne is experiencing rain and wind. The Victorian capital is having its coldest start to May in 40 years with a forecasted maximum temperature of 12C that 'feels like' just 7C

Further north, the cold front crept up into southeast Queensland, where parts of the state experienced their coldest point in 30 years.

In the town of Applethorpe on the Southern Down, the mercury dipped to just 5.1C.

Brisbane dropped by 5C from Thursday to Friday as the minimum temperature fell to 14C and the maximum to 24C.

The cold weather will continue over the weekend for the Queensland capital with minimum temperatures of just 10C and maximums of 24C on both days.

In WA, where the cold front has already passed, is starting to warm up once

Books are still the best way to learn, study shows