Captain Sir Tom Moore has been awarded the freedom of his home town of Keighley after raising almost £33 million for the NHS amid the coronavirus pandemic.

The 100-year-old war veteran, who became a national hero after walking 100 laps of his garden in Marston Moretaine, Bedfordshire to fundraise for the NHS, was given the honour during a ceremony at the West Yorkshire town today.

The prestigious award comes just months after Captain Sir Tom Moore was honoured with the Freedom of the City of London in a virtual ceremony.

Describing the moment he became an honorary freeman of Keighley as a 'privilege', Sir Tom said: 'I remain truly humbled and grateful for the support I have received from far and wide but the warm reception I have received coming home is particularly special to me. It really is great to be back.' Captain Sir Tom Moore was awarded with the freedom of his home town of Keighley during a special ceremony at the Town Hall Square in Keighley, West Yorkshire, today 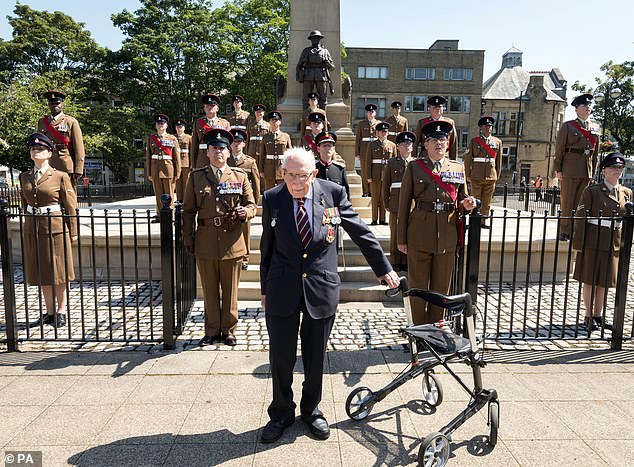 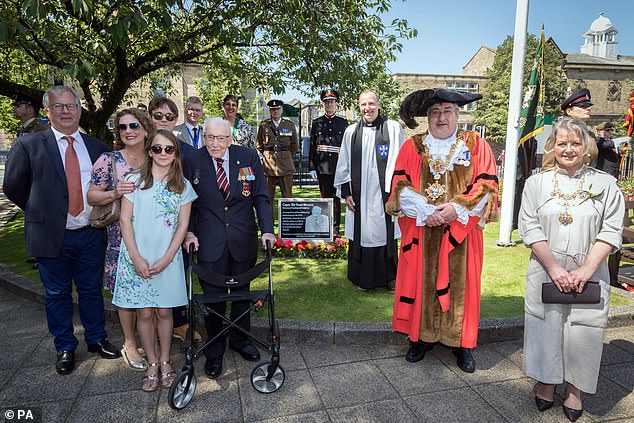 The war veteran was greeted by an honour guard from members of the Yorkshire Regiment for the special ceremony at the Town Hall Square in Keighley town centre.

His family also watched as a plaque was unveiled in his honour.

Captain Sir Tom had set out to raise £1,000 by walking 100 laps of his garden in the village of Marston Moretaine in Bedfordshire before his 100th birthday on April 30.

His efforts struck a chord with national feeling, and praise and donations flooded in with Prime Minister Boris Johnson saying he 'provided us all with a beacon of light through the fog of coronavirus' and recommended he be knighted.

Becoming an honorary freeman of Keighley is the highest honour the council can bestow on anyone, according to town mayor Peter Corkindale.

He hoped Captain Sir Tom could see 'just how proud we are of him and his wonderful achievements'.

Mr Corkindale said: 'I know from speaking to many people in Keighley, the exploits of Captain Sir