Southwest United States is issued an 'excessive heat warning' as several cities in Arizona, Nevada and California see temperatures over 110 degrees throughout the weekend The NWS announced on Wednesday that the warnings would apply for parts of S. Nevada, NW Arizona & SE California through the weekend  Americans living in these areas are advised to 'hydrate frequently and limit times outdoors  Warning has been extended to Monday for areas in Phoenix, Yuma and the Imperial, Arizona, areas  In addition to staying hydrated, the NWS have also told people to seek air condition and to check in with family members  More than 600 people die from extreme heat every year

An 'excessive heat warning' has been issued by the National Weather Service (NWS) for the Southwest United States over the weekend, with record breaking temperatures reaching a record tying 125 degrees in Death Valley National Park on Friday.

The NWS announced on Wednesday that the warnings would apply for parts of S. Nevada, NW Arizona & SE California and advised for people to 'hydrate frequently and limit times outdoors.'

'Strong high pressure aloft will result in a protracted period of VERY hot temps across the deserts,' the NWS Phoenix said on Twitter. 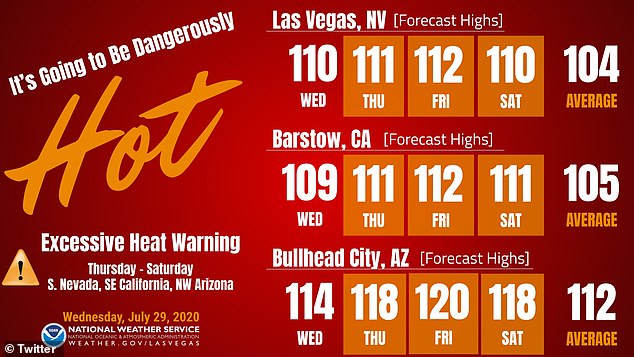 The National Weather Service has issued an executive heat warning for parts of S. Nevada, NW Arizona and SE California 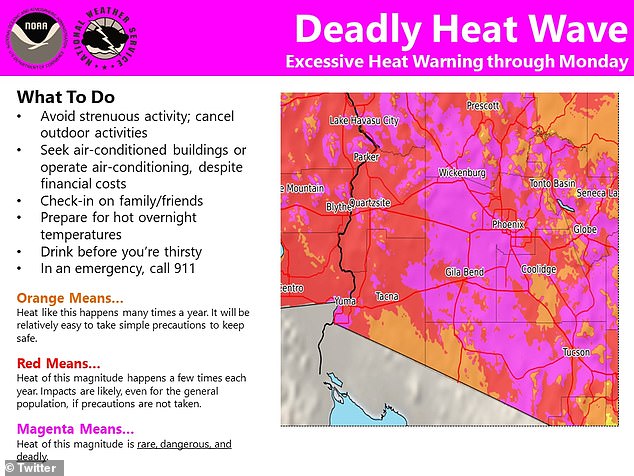 The weather service also announced that the Phoenix, Yuma and

PREV Melbourne work permit website CRASHES as millions of employees try to apply for ...
NEXT James Murdoch steps down from the board of News Corp over 'disagreements over ...