Alarming footage has emerged showing hordes of Melburnians congregating along a beach just hours before the city's tough new curfew kicks in.

People are not allowed outside their homes for almost any reason as of 8pm on Sunday as a state of disaster is declared over the coronavirus crisis.

Musician Anthony Callea on Sunday shared a video of the crowd tightly packed as they walked shoulder-to-shoulder along the pavement. 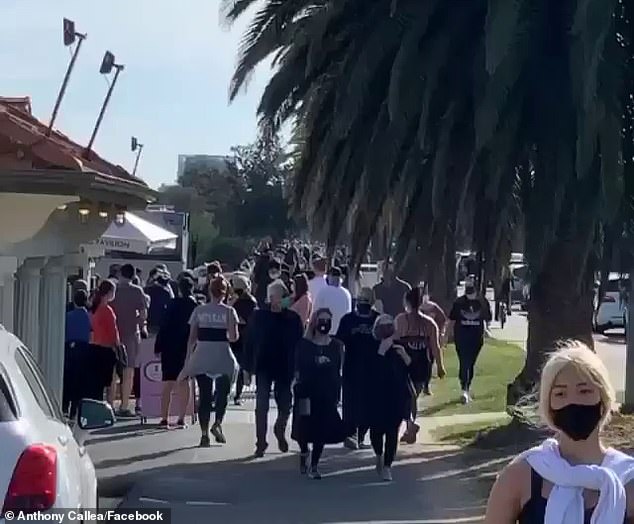 The Australian Idol star blasted the residents, some who appeared to be flouting social distancing measures.

'Really Melbourne? Are you f**king kidding me?' Callea wrote, adding that he did not take the footage.

'Selfish, ignorant and deplorable behaviour! D******ds! Clearly the message and how it’s delivered is NOT WORKING! So angry.

'Why do so many people think they are above it all? These self entitled people will be the first to blame other people and the government for the current situation - we ALL have a role to play!

'To everyone doing the right thing, as a fellow Victorian.... THANK YOU!'

Callea added that it was 'another sad day for Victoria', which saw another 671 new cases of coronavirus in the past 24 hours. 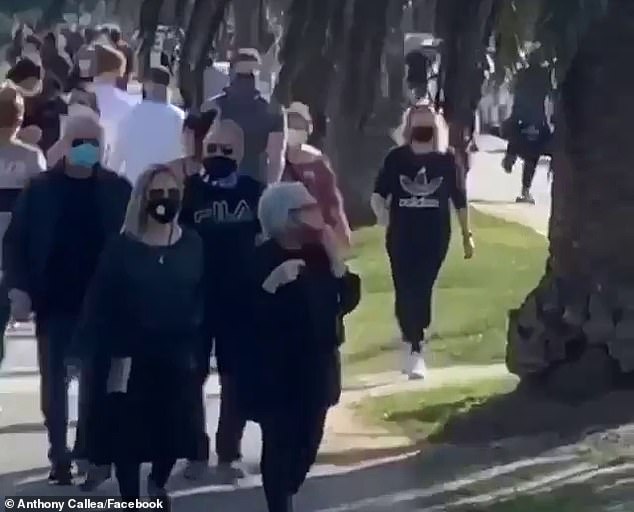 Callea wrote a scathing Facebook post scolding the actions of those in the clip, who he called 'self entitled'

Thousands of outraged social media users slammed the actions of those in the video.

'And that right there is exactly WHY the situation isn’t improving. Get a clue, people! For goodness sake,' one person said.

'Come on Victoria, pull your heads in and make it happen. No need for blaming just do the right thing. No one is invincible!' another added.

'That is totally disgraceful in our neighbourhood! Thank God the restrictions are about to get a lot tougher, but no thanks to the people doing the wrong thing,' a third comment read.

Although it unclear when the video was filmed, Callea's post suggests it was taken on Sunday.

Nearly all people seen in the clip were wearing face masks, meaning it was filmed very recently.

Premier Daniel Andrews brought in the escalated emergency level as the state's worsening catastrophe shows no signs of ending. 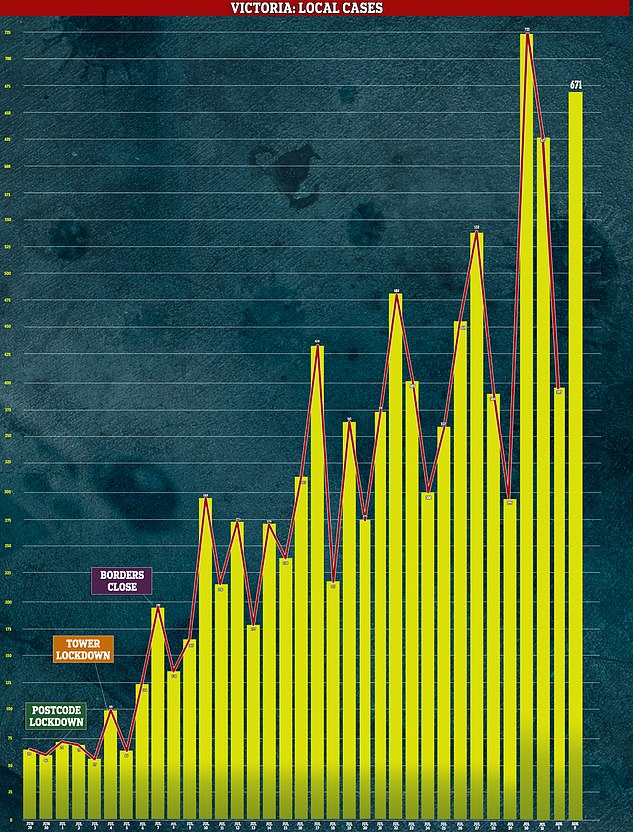 Victoria recorded 671 new COVID-19 cases on Sunday (pictured). A Stage 4 lockdown will see nearly all shops close and high school students back to learning from home

Only 73 of the 671 new cases are linked to known and contained outbreaks, with 598 under investigation, and seven more people are dead.

Mr Andrews confirmed Melbourne will to go into strict Stage 4 lockdown from 8pm on Sunday until at least September 13.

Regional Victoria, which has 328 active cases, will go back into Stage 3 lockdown from 11.59pm on Wednesday as the virus spreads beyond hardest-hit Melbourne.

Melbourne's curfew will be in effect between 8pm and 5am every day, the only reasons to leave home during these hours will be work, medical care and caregiving.

Only one person in a household can go shopping per day and exercise is limited to one hour a day - both must be within 5km from home.

All recreational activity is banned and no more than two people can be together outside, even if they are from the same family or household. 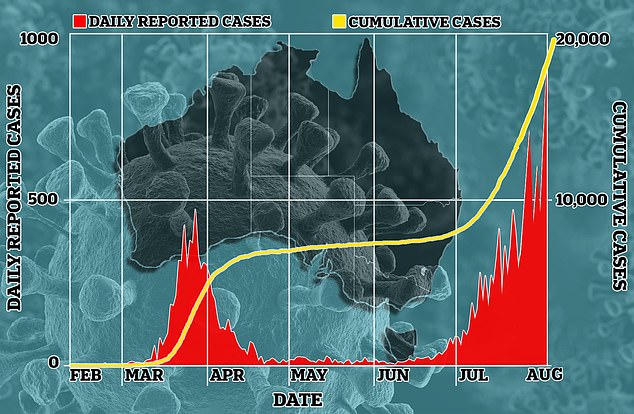 Australia was the envy of the world when it flattened the coronavirus curve in April. Infections remained low throughout May and June, before a horror second wave hit Victoria 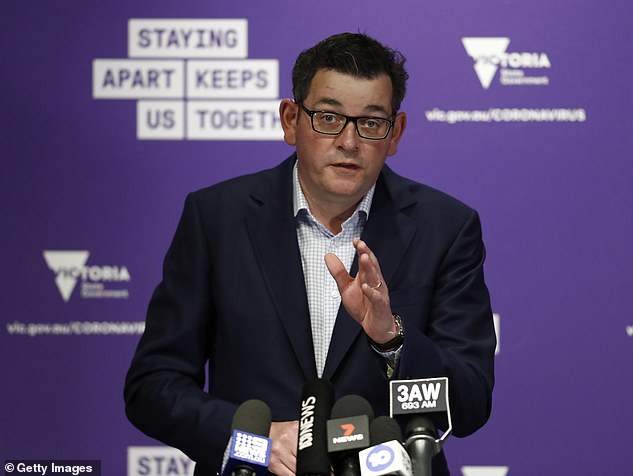 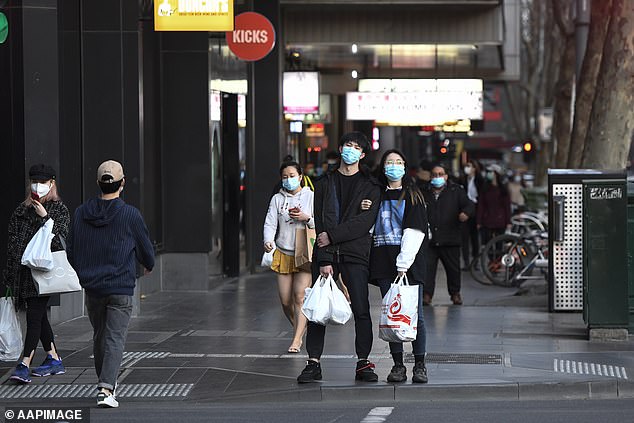 People are seen out hours before a citywide curfew is introduced in Melbourne, Sunday, August 2

'That means it's fresh air. It's a jog. It's a walk. It's in your local neighbourhood. It is staying close to home or in your home,' Mr Andrews said.

What Melbourne's Stage 4 lockdown means for you

State of disaster: Increased police powers to enforce the lockdown. Cautions will no longer be issues, only $1,652 fines or court summons

Curfew: No one allowed outside 8pm to 6am except for work, medical, caregiving - no shopping or exercising

Distance limit: Shopping and exercise can only be done 5km from home

Exercise: All recreational activity is banned and you can only exercise, with one other person, for one hour a day

Partners: You can visit a boyfriend or girlfriend who doesn't live with you, even if they live more than 5km away

Shopping: Only one person can go shopping per household per day

Cafes and restaurants stay open for takeaway, as do supermarkets, etc

Schools: All students learning from home from Wednesday unless they are vulnerable or parents are essential workers. Kindy and childcare close on Thursday (same exceptions apply)

Funerals: No change to funeral limits, but only 10 mourners can leave Melbourne to regional Victoria for one

Public transport: Slashed after 8pm and cancelled late at night

He admitted the one-hour limit wouldn't be enforceable, but that police would be vigilant about the 5km as 'you are or you aren't' close enough.

The premier said the extremely tight restrictions was necessary to prevent to the lockdown dragging on until Christmas.

'All of those changes are about limiting the number of people we come into contact with.

PREV 'Cocoon' actor Wilford Brimley dies age 85
NEXT James Murdoch steps down from the board of News Corp over 'disagreements over ...