A Brooklyn man has pleaded guilty to inciting acts of terrorism, sharing guides on how to create home-made bombs for attacks in New York City and sharing subway maps as he instructed people in encrypted chat rooms on where exactly to attack.

Zachary Clark – who also goes by Umar Kabir, Umar Shishani, and Abu Talha - shared ISIS propaganda including a manual on knife attacks that stated the discomfort of stabbing someone is 'never an excuse for abandoning jihad.'

Clark, 41, also posted a manual called 'Make a bomb in the kitchen of your Mom,' which was issued by al-Qaeda in the Arabian Peninsula and included detailed instructions about constructing bombs using readily available materials.

He entered his guilty plea to one count of attempting to provide material support or resources to a designated foreign terrorist organization, on Monday.

'As he admitted in court today, Zachary Clark pledged allegiance to ISIS and posted calls for attacks on the public and institutions in New York on encrypted pro-ISIS chatrooms,' Acting U.S. Attorney Audrey Strauss said.

'He also posted detailed instructions for carrying out those violent acts. Thanks to the Joint Terrorism Task Force, Clark's efforts to incite deadly violence on behalf of ISIS have been silenced, and he now awaits sentencing for his crimes.'

Authorities say he first pledged allegiance to the Islamic State of Iraq and al-Sham (ISIS) in July 2019, when Abu Bakr al-Baghdadi was the leader, and then again in October 2019 after he was killed and Abu Ibrahim al-Sashemi al-Qurayshi took over. 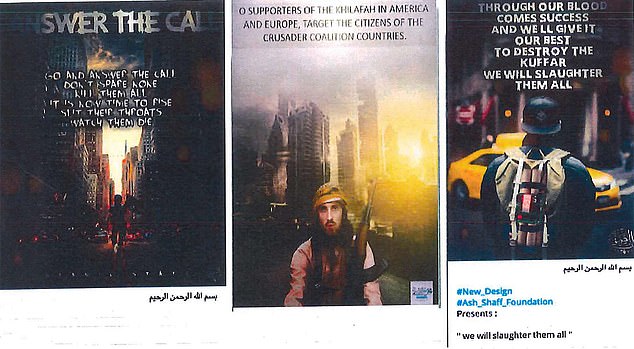 In between that time, beginning in at least March 2019, Clark encouraged ISIS supporters to commit lone wolf attacks in New York City through encrypted chatrooms intended for members, associates, supporters, and potential recruits.

Authorities claim that on August 3,