Wayne Bennett's lover has hit back at claims of an ugly family rift, just days after lashing out at the NRL coaching legend's estranged family.

Bennett, 70, was slammed by his son-in-law and former NRL player-turned-commentator Ben Ikin on Fox Sports last week after he was fined for breaching the code's strict COVID-19 biosecurity protocols by dining at upmarket Sydney Italian restaurant, Grappa, on Wednesday night.

Bennett's partner of four years Dale Cage, 54, sparked a media storm after she took a swipe at Ikin in a scathing social media post on Saturday.

'People in glass houses shouldn't throw stones #justsaying. The truth will hurt some people #staytuned #benikin,' she posted on Instagram.

'The self-righteous scream judgement against other to hide the skeletons dancing in their own closets,' she added, before switching her account to private. 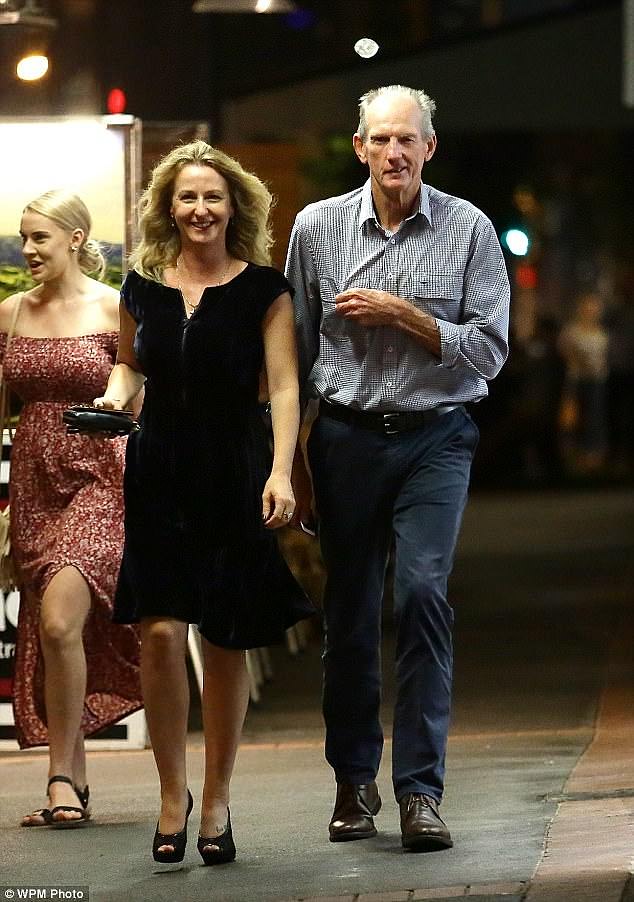 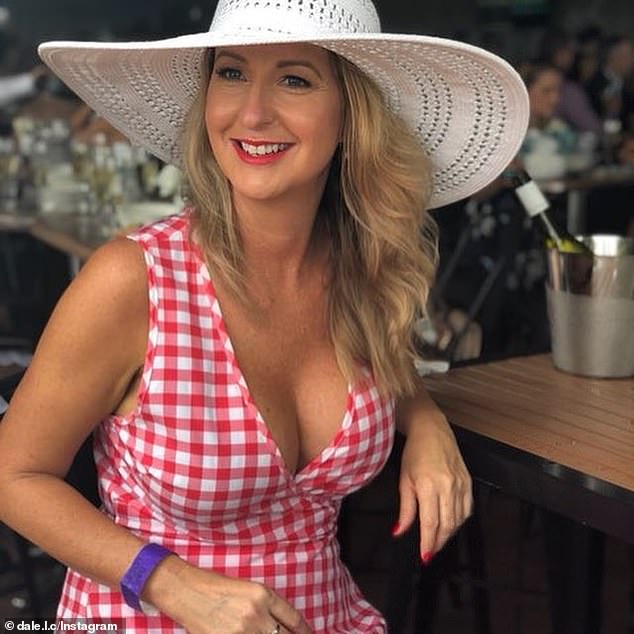 'There's no situation,' Ms Cage said when asked about her feud with Bennett's estranged son-in-law Ikin, who's married to Bennett's daughter Elizabeth.

'I have no comment to make,' she added, refusing to reveal whether she regretted the social media spray that went to the heart of their strained relationship.

Fox Sports star Ikin was also reluctant to get caught up in the saga.

'I would rather not comment, but thanks for getting in touch anyway,' he told Daily Mail Australia.

It's unknown what prompted Cage's attack on Ikin, although a clue might be found in an interview she gave in 2018.

Denying reports that she and Bennett had split up, she told a reporter at the time: 'We know where the rumours are coming from'.

Bennett walked out on his wife of 42 years Trish and their two adult disabled children to start a relationship with Ms Cage, 16 years his junior, in 2016.

Relations between Ikin and his father-in-law soured after he and his wife, who have four children, sided with the heartbroken wife Bennett left behind. 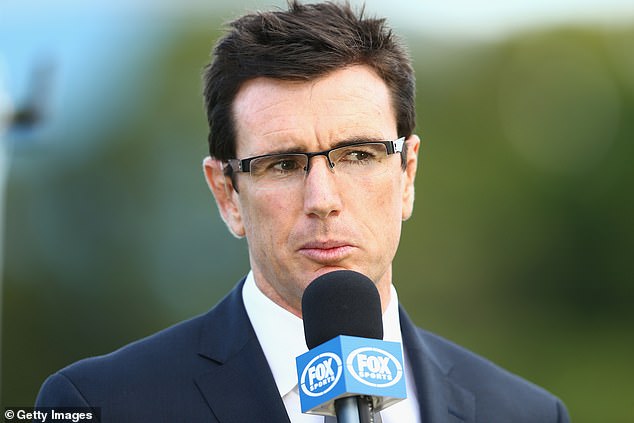 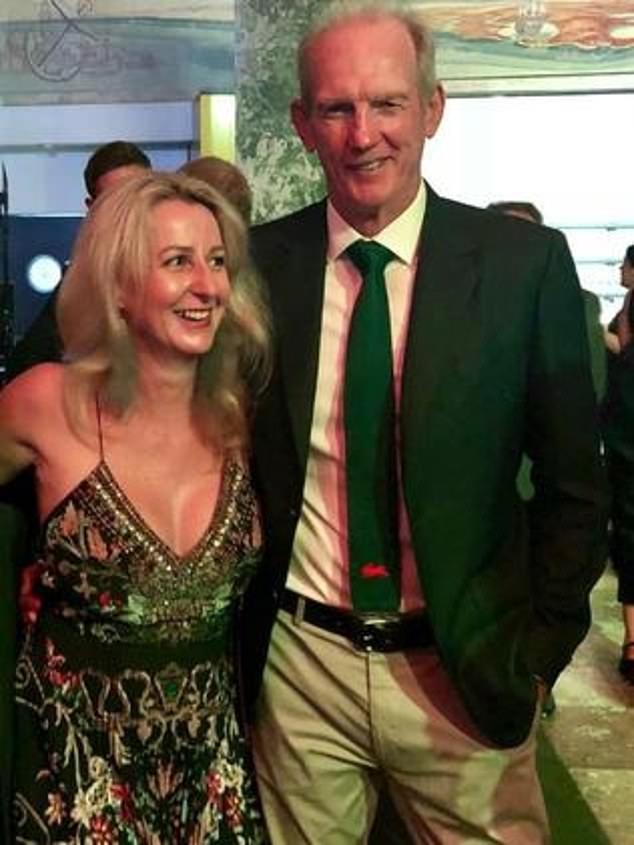 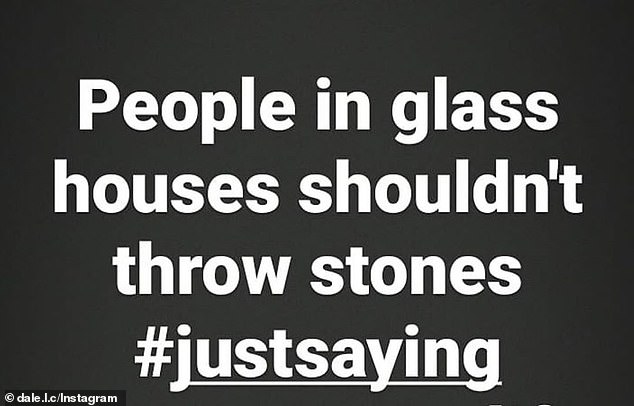 Mother-of-three Cage was working as a secretary at a performance physiotherapy clinic when she crossed paths with Bennett during his coaching stint at the Newcastle Knights.

At the time, the notoriously private Bennett revealed he was no longer living in the family home and hadn't for 'some time' and requested the media respect his 'personal privacy' and that of his family.

Ms Cage left her partner of more than 20 years to be with Bennett, moving from Newcastle to Brisbane before following him to Sydney in early 2019 after he signed with the South Sydney Rabbitohs.

Ikin appeared to put the ugly feud behind him on Tuesday as he applied to be the next chief executive of the Brisbane Broncos.

Long-time Broncos boss Paul White will depart at the end of what's shaping up to be a horror season.

The Fox Sports' NRL 360 host is already being tipped as a frontrunner for the role, having served on the North Queensland Cowboys board that appointed successful coach Paul Green, who steered the side to their maiden premiership in 2015.

Bennett, who won six premierships with the Broncos and one with the Dragons in 2010, was contacted for comment. 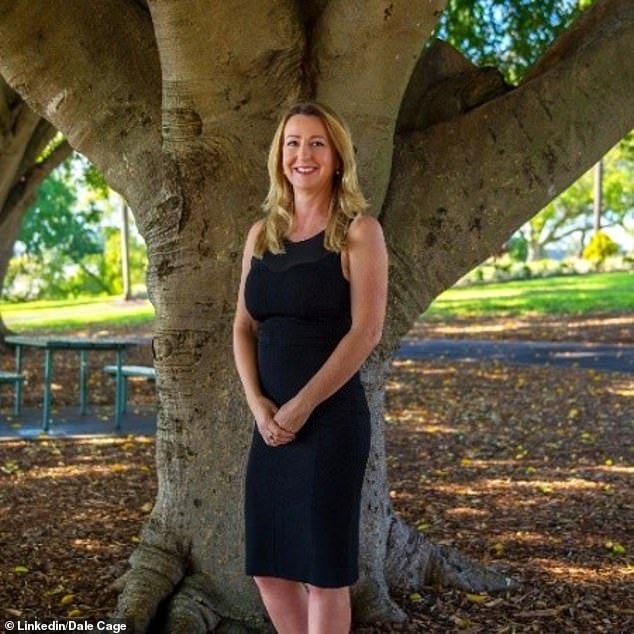 Dale Cage (pictured) moved to Brisbane in 2016 to be with her partner Wayne Bennett. The couple have since relocated to Sydne

The 'White Knight', his prodigal son-in-law and a VERY public split: Once untouchable, Wayne Bennett's messy family spat is playing out publicly because of a sloppy COVID-19 breach – and it may all come down to a report he'd split from his glamorous new partner

For four decades Wayne Bennett did his utmost to stay under the radar. It took an eggplant parmigiana to drag him into the spotlight and expose bitter in-fighting within his family.

Rugby league's most successful coach has made an art-form of keeping his cards close to his chest over the years, earning comparisons to Clint Eastwood and Marcel Marceau.

As coach of the Broncos, Dragons, Knights, Rabbitohs, Queensland, Australia and England, his post-match press conferences have had all the colour and movement of an Easter Island statue.

It took an extraordinary edition of the ABC's Australian Story in 1999 to show another side to the taciturn coach, as a loving husband to wife Trish and doting father to their three children Justin, Katherine and Elizabeth.

The program revealed how big a part Trish played in Bennett's coaching success and how successfully they had pulled together when Justin suffered brain damage as a baby and Katherine was born with physical disabilities.