A black man was shot and killed by sheriff’s deputies in South Los Angeles on Monday afternoon shortly after dropping a handgun as he punched one of the officers in the face, police said.

A crowd of between 70 to 100 protesters have since gathered on the scene of the fatal shooting in Westmont, along 110th Street and Budlong Avenue, to demonstrate against the lethal use of force.

The man, who has not yet been named, was observed by deputies riding a bike down the street when they made a U-turn in their vehicle to approach him for apparently violating a vehicle code.

Lt. Brandon Dean said it was at this time that the man jumped off of his bike and began running northbound toward 109th Place, when deputies briefly lost sight of him.

The man was found shortly afterwards a few blocks away at which time Dean says the officers attempted to make contact with him.

As they approached, Dean said the man, who was clutching items of clothing in his hands, punched one of the officers in the face and then dropped the items he was carrying.

‘The deputies noticed that inside the clothing items that he dropped was a black semi-automatic handgun,’ Dean said during a Monday conference.

The two officers then both opened fire and the man, striking him several times. 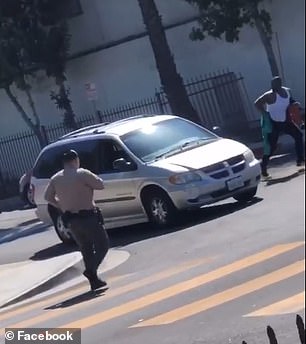 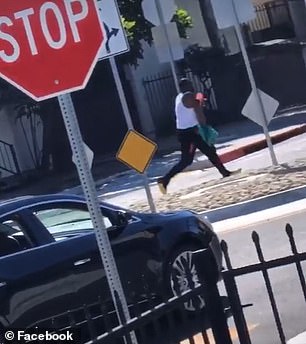 The man jumped off of his bike and began running northbound toward 109th Place, when deputies briefly lost sight of him 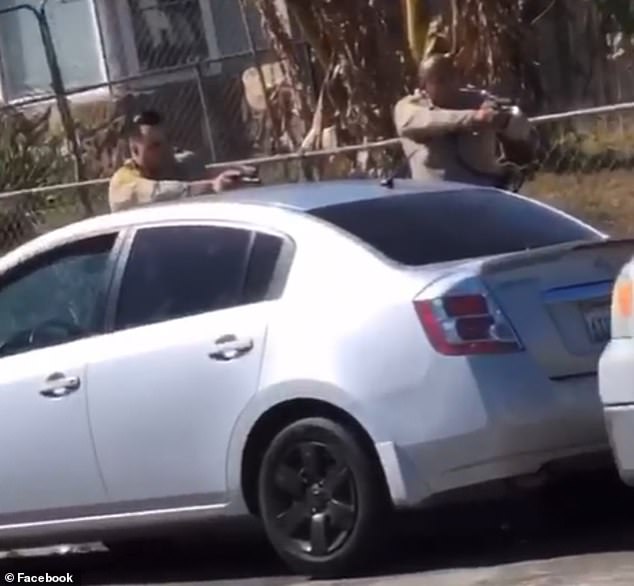 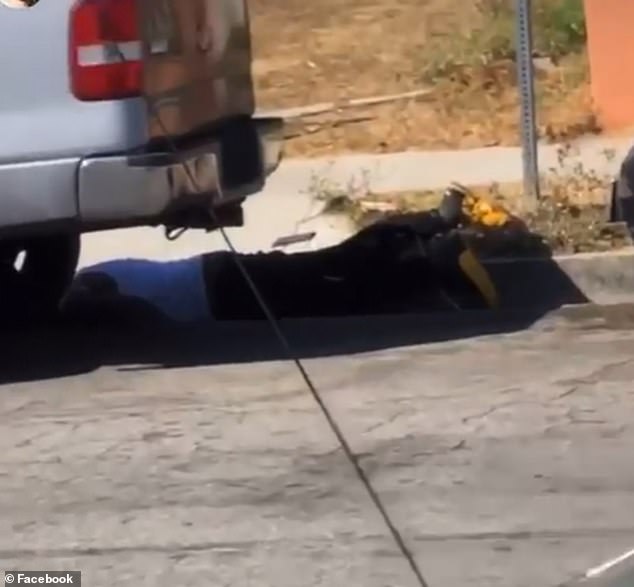 The man, dressed in a white tank-top and pants, is seen lying face down in the road by the right-rear tire of a silver pick-up truck

Dean was unable to confirm how many times the man was hit and where, as ‘we have not been able to move the body yet as we were waiting for the coroner’s office.’

The man, identified only as a black man in his 30s, was pronounced dead at the scene. No deputies were injured during the incident.

‘We still have to conduct our interviews of the investigating officers to see exactly what happened and transpired during the deputy-involved-shooting,’ Dean told reporters when pressed about what prompted the deadly use of force.

‘But if this individual was reaching for a semi-automatic handgun, I would suggest that, you know, that’s probably why deadly force was important,’ he continued.

The man’s black semi-automatic handgun was recovered at the scene, officials said.

Investigators remain at the area investigating the scene of the shooting along the 200 block of West 109th Place,