Home owners could be forced to sell their houses this month if they can't service their mortgage repayments.

Six-month mortgage repayment holidays are ending in September while $1,500 a fortnight JobKeeper wage subsidies are being scaled back to $1,200 for full-time workers.

The unemployed on JobSeeker will also see their coronavirus supplement more than halved from $550 to $250. 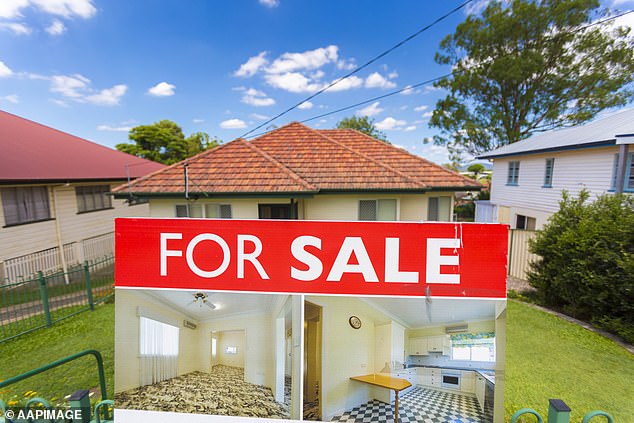 Home owners could be forced to sell their houses this month if they can't service their mortgage repayments. Pictured is a Brisbane house

Financial comparison website Canstar group executive Steve Mickenbecker feared this cocktail of misfortune could force home owners to sell, even though the Reserve Bank of Australia this month left interest rates on hold at a record low of 0.25 per cent.

How COVID-19 is hurting house prices

'September is the turning point for many homeowners and investors hoping to see the year out in better shape and avoid selling their property under duress,' he said.

'With JobKeeper and JobSeeker winding back from September and many mortgage holders nearing the end of repayment pauses with their banks, September will be a testing time.'

The news is particularly bad in Melbourne, with median house prices in August declining for the fifth month in a row as the city was placed into a strict, Stage 4 lockdown with an 8pm to 5am curfew.

Prices in wealthier suburbs, however, fell by 1.9 per cent compared with 0.6 per cent in poorer areas of the Victorian capital.

In Sydney, median house prices fell by another 0.5 per cent to dive back below the psychological $1million mark for the first time since the COVID-19 pandemic began - sinking to $985,723.

House prices were flat in Brisbane, Adelaide and Perth.