Australia's first recession in almost 30 years is set to be confirmed on Wednesday.

Figures for the June quarter are expected to show the worst economic downturn since the 1930s Great Depression, with economists forecasting a five per cent  contraction from the coronavirus pandemic.

The national account data is set to confirm a technical recession for the first time since mid-1991, after a 0.3 per cent decline in gross domestic product in the March quarter.

Until today, Australia officially held a 29-year world record for avoiding a recession. 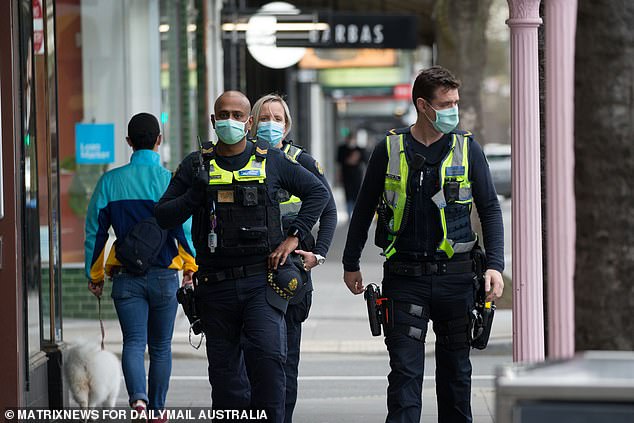 Australia's first recession in almost 30 years is set to be confirmed on Wednesday. Pictured: Police in locked-down Melbourne

CommSec chief economist Craig James is expecting the Australian Bureau of Statistics data to show a 5.4 per cent plunge in economic activity during the June quarter - the sharpest fall in more than 60 years.

Up until the 1991 recession, Australia had suffered an economic contraction several times a decade, on average.

A prolonged recession that began in September 1982 lasted a year, during a period of prolonged drought and the devastating Ash Wednesday bushfires in Victoria and South Australia. That followed another recession in 1981.

Another recession also occurred in 1977, during an era of widespread strikes.

A credit squeeze also sparked another recession during the June and September quarters of 1961, ending only two months before then Prime Minister Robert Menzies held on to power by one seat.

PREV China steps up trade war with Australia by slapping a ban on the nation's ...
NEXT Four Navy aircrew parachute to safety moments before E-2C Hawkeye plane crashes ...