Australia's worst postcodes for mortgage stress have been revealed amid fears that the first recession in three decades will trigger a wave of foreclosures.

Digital Finance Analytics calculated that more than 80 per cent of borrowers were struggling to pay their bills in parts of Melbourne, Sydney, Brisbane, Perth, Hobart and some regional areas, as coronavirus lockdowns crippled the economy.

The national average of people who lacked sufficient funds to pay their bills had surged to 40 per cent, up from 33 per cent in February before the COVID-19 pandemic was declared.

Six-month mortgage repayment holidays had shielded some struggling mortgage holders from the full effects of the lockdown but the banks are now asking for their money and pressuring borrowers to sell if they can't pay up. 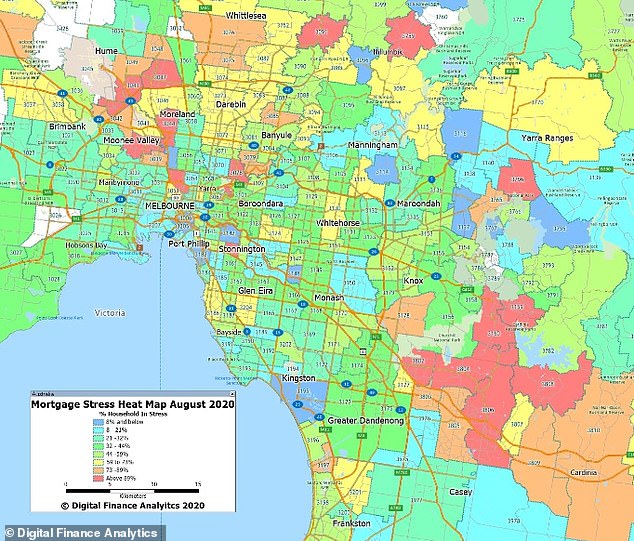 Australia's worst postcodes for mortgage stress have been revealed amid fears the first recession in three decades will worsen an already dangerous situation. Digital Finance Analytics calculated that in parts of south-east and northern Melbourne, more than 85 per cent of borrowers are in mortgage stress

Young families were in particular danger last month with 73.1 per cent of them in dire straits compared with 66.4 per cent for battlers living in the urban fringes of Australia's major cities.

Some postcodes where borrowers in trouble

6030 Clarkson, Merriwa and Mindarie in Perth's north: 76 per cent

4034 Carseldine, Geebung and Zillmere in Brisbane's north: 76 per cent

Digital Finance Analytics said the problem in outer-suburban areas was set to worsen in March 2021 as extended mortgage repayment reprieves ended, in tandem with unemployment rising.

'Some of these people have some of the lowest savings and therefore are only a month away from not being able to pay for all of the bills.

In the worst-affected areas of Australia, more than 89 per cent of borrowers can't pay their bills - with Pascoe Vale, Narre Warren, Belgrave, Armadale and Essendon topping the list.

At Rowville in Melbourne's outer south-east, 84 per cent of home borrowers were in stress in August.

Epping in the city's north had 78 per cent of borrowers in stress.

In western Sydney, 82 per cent of borrowers were struggling at Lethbridge Park, Minchinbury and Mount

PREV AFL stars are BANNED for 10 games for breaking COVID-19 rules after being ...
NEXT Gallery: The best photos from around the world mogaznewsen