Donald Trump took a victory lap Friday as official figures showed the U.S. unemployment rate fell sharply in August to 8.4% from 10.2% even as hiring slowed, with employers adding the fewest jobs since the pandemic began.

Employers added 1.4 million jobs, the Labor Department said, down from 1.7 million in July. The U.S. economy has recovered about half the 22 million jobs lost to the pandemic.

Trump claimed the figures were 'great' and tweeted: '1.37 Million Jobs Added In August. Unemployment Rate Falls To 8.4% (Wow, much better than expected!). Broke the 10% level faster and deeper than thought possible.'

However Friday's report added to evidence that nearly six months after the coronavirus paralyzed the country, the economy is mounting only a fitful recovery.

From small businesses to hotels, restaurants, airlines and entertainment venues, a wide spectrum of companies are struggling to survive the loss of customers with confirmed viral cases still high.

The biggest single gain of new jobs was from the government, which hired an extra 300,000 people.

After an epic collapse in the spring, when the economy shrank at a roughly 30% annual rate, growth has been rebounding as states have reopened at least parts of their economies. Yet the recovery remains far from complete. 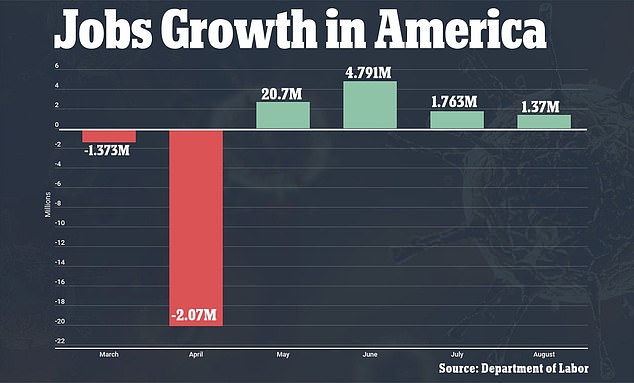 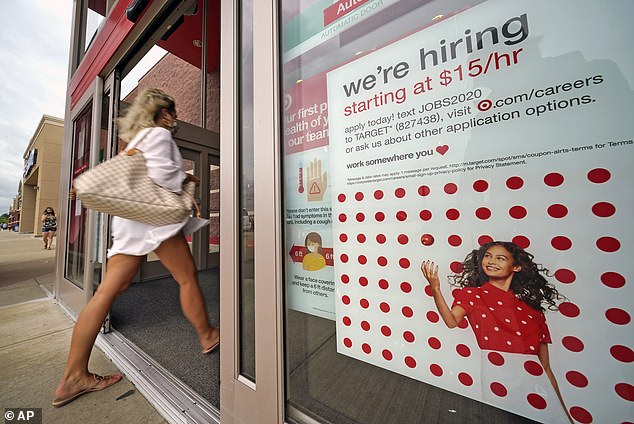 Slowing hiring: Jobs growth fell again in August, a suggestion that employers are not certain about a recovery

Many economists think significant hiring may be hard to sustain because employers are operating under a cloud of uncertainty about the virus.

Daily confirmed case counts have fallen from 70,000 in June to about 40,000. The decline has leveled off in the past week and the viral caseload remains higher than it was in May and June.

As a result activities like restaurant dining and air travel are still far below pre-pandemic levels. Most economists say a meaningful economic recovery will likely be impossible until the coronavirus is brought under control, most likely from the widespread use of a vaccine.

Friday's jobs data was the second-to-last employment report - for most voters, the most visible barometer of the economy - before Election Day, Nov. 3.

Trump faces the daunting task of seeking re-election in the worst economic downturn since the 1930s. Yet voters in surveys have generally given him higher marks on the economy than they have on other aspects of his presidency.

The jobs report coincides with growing signs that more companies are making permanent job cuts rather than temporary furloughs. That trend could keep the unemployment rate persistently high. It is